I tried mount -t ext4 /dev/sdb1 /mnt/storage2 with identical outcome. I've done this stuff many times before and have never ran into anything like this. I've already read this mount: wrong fs type, bad option, bad superblock on /dev/sdb on CentOS 6.0 to no avail.

fdisk output regarding the drive

WARNING: This will wipe out your drive!

You still need to create a (new) file system (aka "format the partition").

Double-check that you really want to overwrite the current content of the specified partition! Replace XY accordingly, but double check that you are specifying the correct partition, e.g., sda2, sdb1:

parted / mkpart does not create a file system.  The Parted User's Manual shows:

Creates a new partition, without creating a new file system on that partition.

I had this problem with /dev/sda on Ubuntu 16.04 I solved it by booting into a live usb and doing the following:

To see your disks use lsblk

If you can see your drive thats good, run fdisk -l to see if the system can use it.

Run this command to attempt to repair bad superblocks on the drive.

fsck /dev/sda1 (replace /dev/sda1 with the drive you want to fix).

When it asks to repair blocks select yes by pressing 'y'

Then I was able to mount the device using

This solved it for me.

In my case, the solution was install nfs-utils on the client side.

I have a different process for this that replaced the bad superblock with one of the alternatives. FSCK can be a "lossy" process because FSCK may want to remove too much data or to remove data from a sensitive location (e.g. data directory for a data base) so there are times when I don't want to use it or it doesn't work.

You can sudo yourself silly or just become root for the process. Just remember that when you are root, Linux assumes that you know what you're doing when you issue commands. If so directed, it will speedily delivery Mr. Bullet to Mr. Foot. Like many other things, with great power comes great responsibility. That concludes my warning on running your system as root.

Figure out which device - assuming /dev/sdc1 for this example along with EXT4 as its the most common for this explanation.

Your device and your file system (ZFS, UFS, XFS, etc.) may vary so know what you have first. Do not assume it's EXT4. Ignoring this step can cause you problems later if it's NOT an EXT4 file system.

This will output the alternate superblocks stored on your partition.

Pick an alternate superblock - keep in mind that the first one is the default and its bad so let's not use that one. You will also want to pick one from the list you get from your partition. Do not use the example. Your superblocks may be stored elsewhere.

Reboot and see if this worked. If not try the next superblock on the list. I've had to go the third or fourth one a couple of times.

Now try the command to validate the disk again. See if you get the same messabout about bad superblocks.

Keep trying until you either run out of superblocks or it works. If you run out, you likely have bigger issues and I hope you have good backups. You can try running FSCK at that point.

for me the problem was that the mount command contained options (umask, uid) which was not accepted (probably due to the device has ext4 file system)

After removing the options, it worked

I know this is an old question but in case this helps anyone that stumbles across this.

I was attempting to connect and NFS mount but was failing and getting the same error as OP.

After installing the dependencies I was good to go:

In case you want to mount a disk in linux mint. here is how is my secondary disk looks like 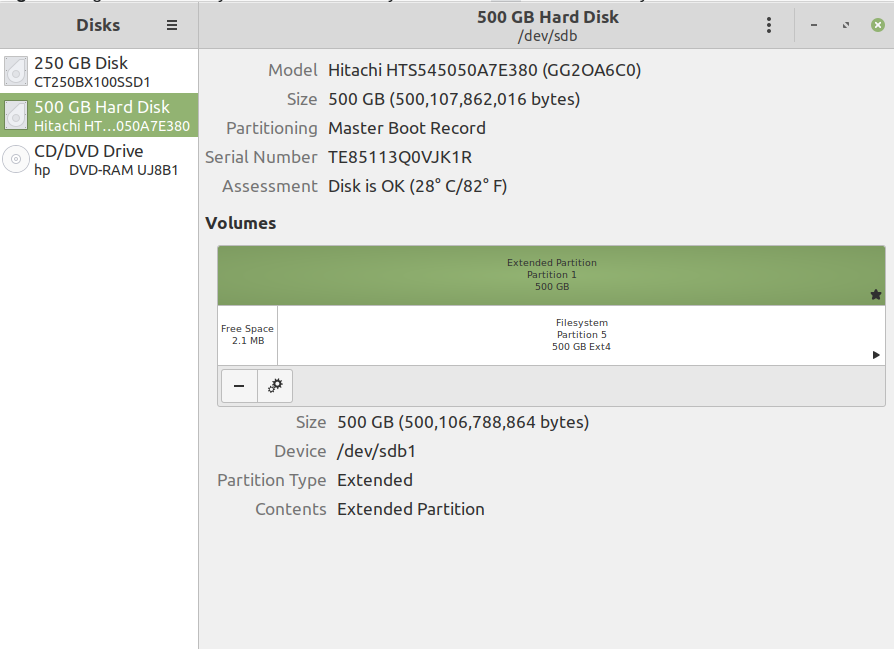 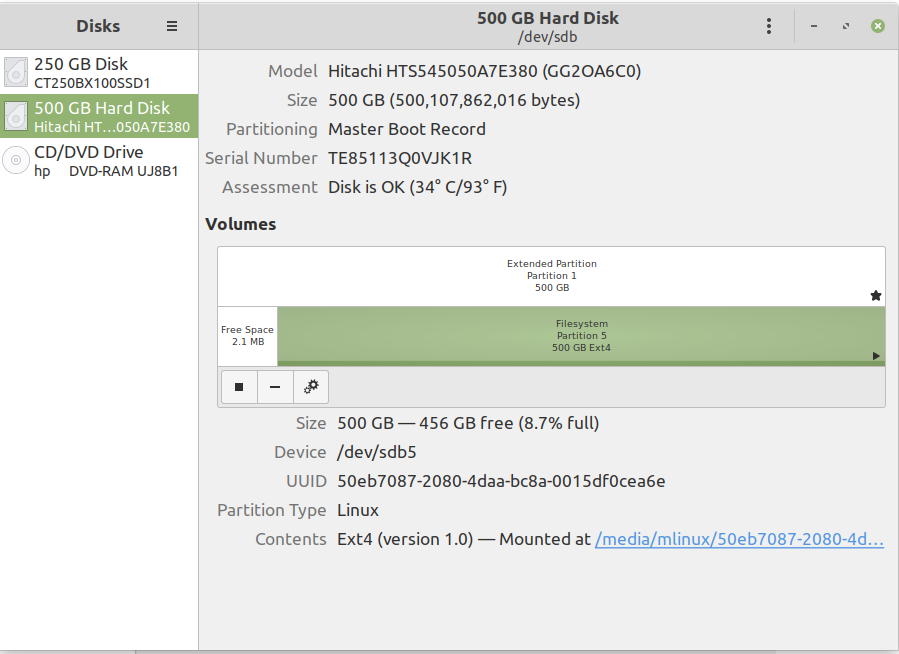 In my case I wasn't paying attention, and was trying to mount /dev/sda /mnt instead of mount /dev/sda1 /mnt. Be careful out there!

I am used testdisk to recreate the partition table and I was able to recover my HD and all the date without formatting it.

Unplug your HD and plug it again (this is what they mean, in this case, by "reboot")

Unbelievable. I see this come up All the time. I can manually mount with the mount command no problem. When I try to mount -a I get the same bad fs type error. I looked at the /etc/fstab carefully and saw I spelled default not defaults. It is the spelling that gets me.

For me, there was some mysterious file causing this issue.

I had to clear the directory using the following command:

Warning: this might delete files you have saved. So you can run ls to make sure you don't lose important saved files and backup these files before execution.

If you are trying to mount image file in any folder present in /home in ubuntu then try these Commands:

Specified: name of your directory = system , name of image file with extension = system.img

I had to install ntfs-3g.

The message appeared in dolphin. With installing ntfs-3g, dolphin can mount it properly.

I got the same error on boot and it was due to wrong filesystem entry on /etc/fstab.

and it should be ext4 mounted

in my case changing sata cable powering both drives and restart seems to fix the problem. however I was unable to mount them on the same old point so changing them fixed for me. then I manually remove the old mount points from mnt directory :)

Not the answer you're looking for? Browse other questions tagged ubuntu mount fdisk or ask your own question.