Why don't man pages have examples?

Is there a reason why most man pages don't include a few common examples? They usually explain all the possible options, but that makes it even harder for a beginner to understand how it's "usually" used.

That depends on the man pages... Traditionally, they have included a section with examples - but for some reason that is usually missing from the man pages under Linux (and I assume other using GNU commands - which are most these days). On for example Solaris on the other hand, almost every man page include the Example section, often with several examples.

If I were to guess, FSF/GNU has for a long time discouraged use of man pages and prefer users to use info for documentation instead. info pages tend to be more comprehensive than man pages, and usually do include examples. info pages are also more "topical" - i.e. related commands (eg. commands for finding files) can often be found together.

Another reason may be that GNU and its man pages are used on many different operating systems which may differ from each other (there are after all lots of differences just between different Linux distros). The intention may have been that the publisher added examples relevant to the particular OS/distro - which obviously is rarely done.

man-pages are thus intended as

That said, I very much agree with you that man pages ought to have examples, since they can explain the usage better than wading through the man page itself. Too bad examples generally aren't available on Linux man pages...

Sample of the Example part of a Solaris man page - zfs(1M):

This particular man page comes with 16(!) such examples... Kudos to Solaris!
(And I'll admit I myself have mostly followed these examples, instead of reading the whole man page for this command...)

I don't think there's a good answer to this. It's a culture thing. Some man pages do have example usage. E.g. man rsync. You could try to change the culture by writing to the man page author and asking him or her to add some sample usage or (much better) offering some sample usage examples yourself. If you offer a free software author a patch, particularly a documentation patch, it's approximately ten thousand times more likely to achieve the desired result than a simple request.

If you're looking for an alternative to man pages, you could always try bro pages, which only show various examples to a command, which you can then vote on among a list of community-submitted examples. For example, the command bro tar will give you: 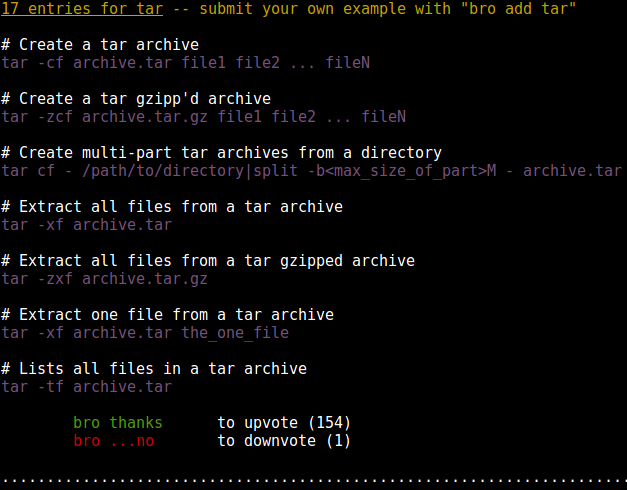 Not the answer you're looking for? Browse other questions tagged man history or ask your own question.

1
Differences between man pages
36
Reading and searching long man pages
17
Can't install man pages on minimal Centos Docker container
4
On Line Man Pages from Terminal
4
How to view differences between the man pages for different versions of the same program?
3
How to access man pages as structured content
11
How to search a pattern containing hyphens inside man pages?