How to change the way the Linux File System is interpreting my file? My source code file is read as a 'broken link', despite it still a text file

After some operation as run some make files, and emulators, a source code file (*.cc) is read as a 'broken link', despite it still the same file. I know it is the correct file because the (*.cc) file come from my git repository, and over there and other computer, the (*.cc) file is being correctly read as a source code file. Also, I can see over the git command git status the file is unchanged. Then the only conclusion is the Linux File System atribute corruption.

How to fix such error?

This below are some commands run over the file.

This is a image about the file property over the nautilus file manager: 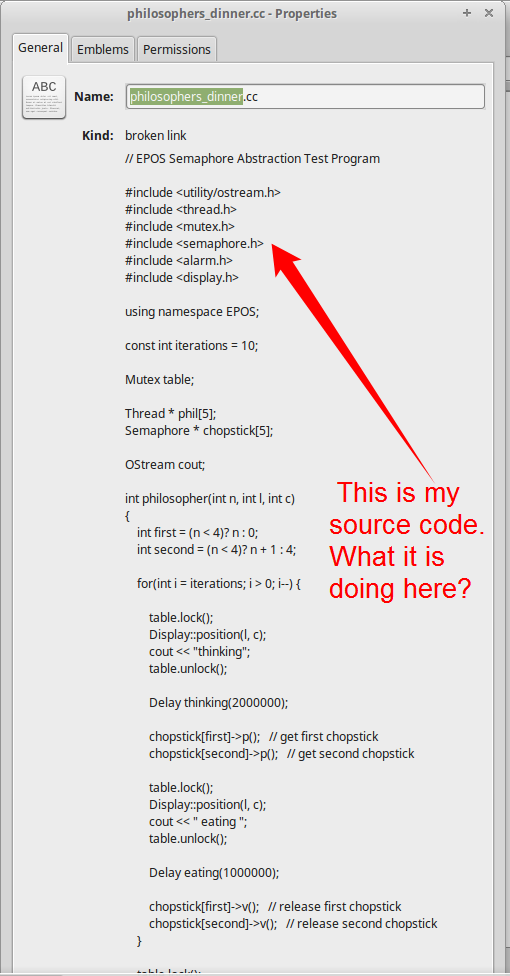 I have no idea how you ended up with this.

I just figure it out how to do it as I and did it again after fix it. I am using the GUI git tool Smartgit, and every time I delete the file file on the file system, and go to the Smartgit interface, and click to reset its state, (i.e., undelete it), it comes back from the dead as that crazy file link. But the stranger, is even by console git status show the file is unchanged and is perfectly as it is on the remote git repository.

Also, it is not only on Smartgit, if by command line I do: git checkout HEAD -- philosophers_dinner.cc

After delete the file, it comes back again from the dead as that crazy link. Now, I can stay all day long playing with linux within these two commands:

You've presented no evidence to bear out the conclusion that there's any sort of "corruption" going on. This is a perfectly allowable symbolic link, albeit a bonkers one. There are a fair number of ways, with various ordinary tools, to make such a symbolic link. It's a beginner exercise in using shell substitutions, for example.

How you got into this bizarre mess only you know, and you haven't revealed to us. How you get out of it is a complete doddle. It's two commands, one of which you have mostly already run:

How you stop yourself from getting back into it again in the future is, likewise, something only you can know, as you've given the world zero concrete information beyond vague "oh, I did some stuff" handwaves. You might have run some makefile, that did something, at some point. It may or may not have had a bearing upon the existence of this symbolic link.

So you might be running these two commands again.

Your file is shown as a broken link because it is a broken link. It is a link whose target is something that looks like C++ code. Normally the target of a link looks like a path to a file, but as far as the system is concerned, it's just some text.

If you want to preserve the current content, extract it with readlink and save it to a file:

You'll still have a symlink if you check out historical versions. git log producer_consumer.cc should tell you when the symlink was checked in, but that might not help with the why.

The solution is as the file is versioned, firstly delete it and commit the deletion. Secondly create a new file and copy its correct contents from the version system without cloning it. For example, by an web browser as GitHub allows it, them commit them.

Not the answer you're looking for? Browse other questions tagged shell linux-mint symlink xfce make or ask your own question.

3
How to change the install path of my Linux Source tree?
12
Why change the owner of a symbolic link in linux?
7
Change the color of the file name text
1
Broken package system in Linux Mint - Firefox looks like the culprit
2
Can a hard link break the file system structure?
3
How is a symlink represented in a file system vs a hard link?
0
Is there a simpler way to create a symbolic link to a file in the current directory than by typing out the complete filepath?
0
How to symbolic link the files to new directory based on names in text file?