Kate and KWrite both don't show all \n characters. Problems appear to be next to where there are empty lines.

The problem isn't just in the highlighting itself. Wrong number of matches are found. Search and replace doesn't replace all \n characters.

Searching for \r doesn't find anything. If I place the cursor at the beginning of, say, line 7 and press delete and then enter, the search works.

Is it possible that other characters, besides \n and \r are used for newlines? The file was created as UTF-8 and only opened with Kate as UTF-8. 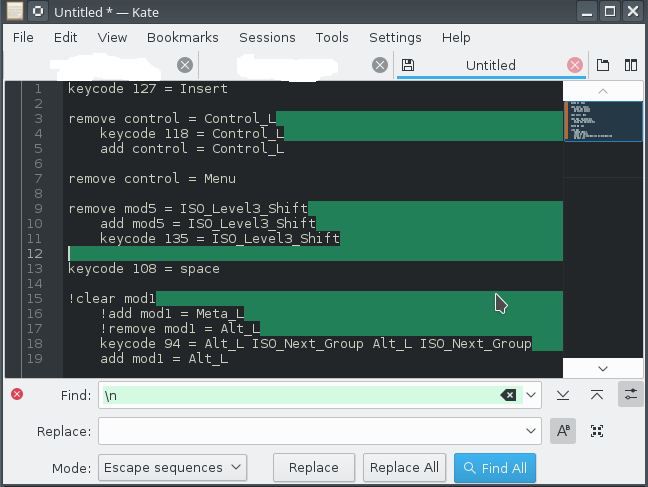 I understand that posting a picture of text is discouraged, but I can't show the highlighting without the screenshot.

This is of utmost importance to me, because I use Kate's search and replace feature to quickly format big documents, e.g. for StackExchange.

Update I think I found a way to reproduce the bug.

If I save the file on step 5 (the undo), the bug still works. Examining the file with xxd after the save on step 5 and after step 7 (the reload) gives identical outputs. So I guess Kate doesn't change the file or its encoding in any step, but somehow manages to screw up the search.

Browse other questions tagged search escape-characters special-characters kate or ask your own question.

16
Where to get Kate color schemes?
3
Kate replaces alignment spaces by tabs
8
Change directory for Kate syntax highlighting files
3
Extend syntax highlighting for Markdown in Kate?
3
Kate and case sensitive search
2
What limits Kate text editor search feature?
0
How to set default color and font schemes for different katepart applications
7
Why does Kate replace spaces in filename with “%20”, thus preventing opening it?
1
Kate/Kwrite editor drag/drop/copy functionality gone
0
How to link in between text document of personal notes with tags (to jump between lines across files in a text editor like Kate)?