This kind of plane is a common tool used to view Rontgen pictures in Radiology. It exists as a standard in many RTG programs in hospitals. I would like to have a similar tool open-source for inspecting pictures.

Situation: to have a plane of contrast-brightness adjustments
Motivation: need to adjust continuously contrast-brightness such that Gimp's default tools are not enough fast and not sure if Imagemagick's browser can be extended with it
Proposal: have a plane where you can adjust brightness and contrast in a plane by using some Gimp macros, since I think you cannot extend ImageMagick for it
Nicknames: a nonlinear plane of regression, a nonlinear plane of contrast and brigthness, ...
Characteristics: mouse/keyboard control in the plane

You browse image and its parts by the script about How Open Specific Part of .png Figure in Ubuntu's Terminal? by keys (\up,\down,\left,\right) or use your mouse to choose the appropriate location. Start the image in the script by reviewImage 960 raw.png or manually adjust those settings in Gimp, respectively: Fig. 1 Starting image by reviewImage 960 raw.png in Terminal ImageMagick, Fig. 2 Changing Brightness-Contrast in Palette of Gimp 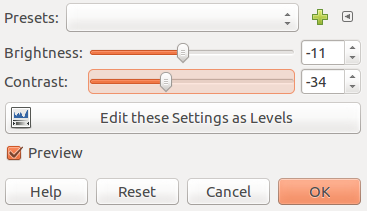 Jansen's proposal in Colours > Curves is great but I would like to have a one-liner to start it in Terminal because it is so important tool for me. Can you? Fig. 3 Gimp Colours > Curves 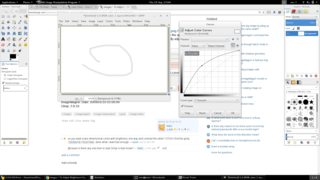