xfce4-display-settings: why is there no "Extend to the left"?

It gets boring when you have to do that on a daily basis. Besides — and I don't know why — the «Mirror Displays» button is disabled. The display selection window shows itself right after I plug in the HDMI cable, which is great. If the desktop was extended before I unplug the HDMI cable, it snaps back to the laptop panel immediately afterwards and that's great too. Therefore I need none of the «External monitor» and «Laptop» buttons.

All in all, out of 4 buttons on that panel only one is half useful, the other ones not at all.

So aren't there any... plans to add an «Extend to the left» button in xfce4-display-settings? Why arbitrary limit extension to right sides? Are left sides... evil?

This is a big old bug - and they don't seem ready to fix it.

In fact there is no extending of the internal primary display to the left in Xfce: extending to the left (as indicated in the other answer - also here - or by other methods like drag&drop in GUIs that allow re-arranging) makes the external display the primary one.

The very term primary gets a different meaning in Xfce: it's just the LEFT part of ONE desktop/workspace that spans on multiple monitors.

It is related to the way Xfce treats workspaces in relation to multiple display monitors. Xfce always shares the same workspace between different displays from left to right. Making a display the primary one on Xfce simply means showing on that display the left part of one workspace (and the right part on the second display).

I can only understand the difference by comparison with other desktops that I use in other systems.

In the Pantheon desktop (elementary OS) and most other modern desktops extending means that each display has a separate workspace. The primary display has all the controls, while the second display simply takes another workspace, and that is set to the right or left depending on your setting.

In Xfce it's not so. With an extended display connected, I see that the second workspace is not present there, it is accessible only if I scroll for that (according to my Xfce desktop setting): the two displays share the same workspace from left to right (including the panel): the primary is always to the left. Changing the workspace when you have two monitors simply shares the second workspace between the two monitors (while the first workspace becomes absent from all monitors), instead of giving each monitor its own separate workspace.

That is why with the most common configuration of the panel, the left part (the menu button, the window buttons) is on the primary, the right part (notification area, clock etc) is on the second display if the 'Span monitors' option is enabled.

Left (primary) half of the workspace:

Right half of the same workspace: 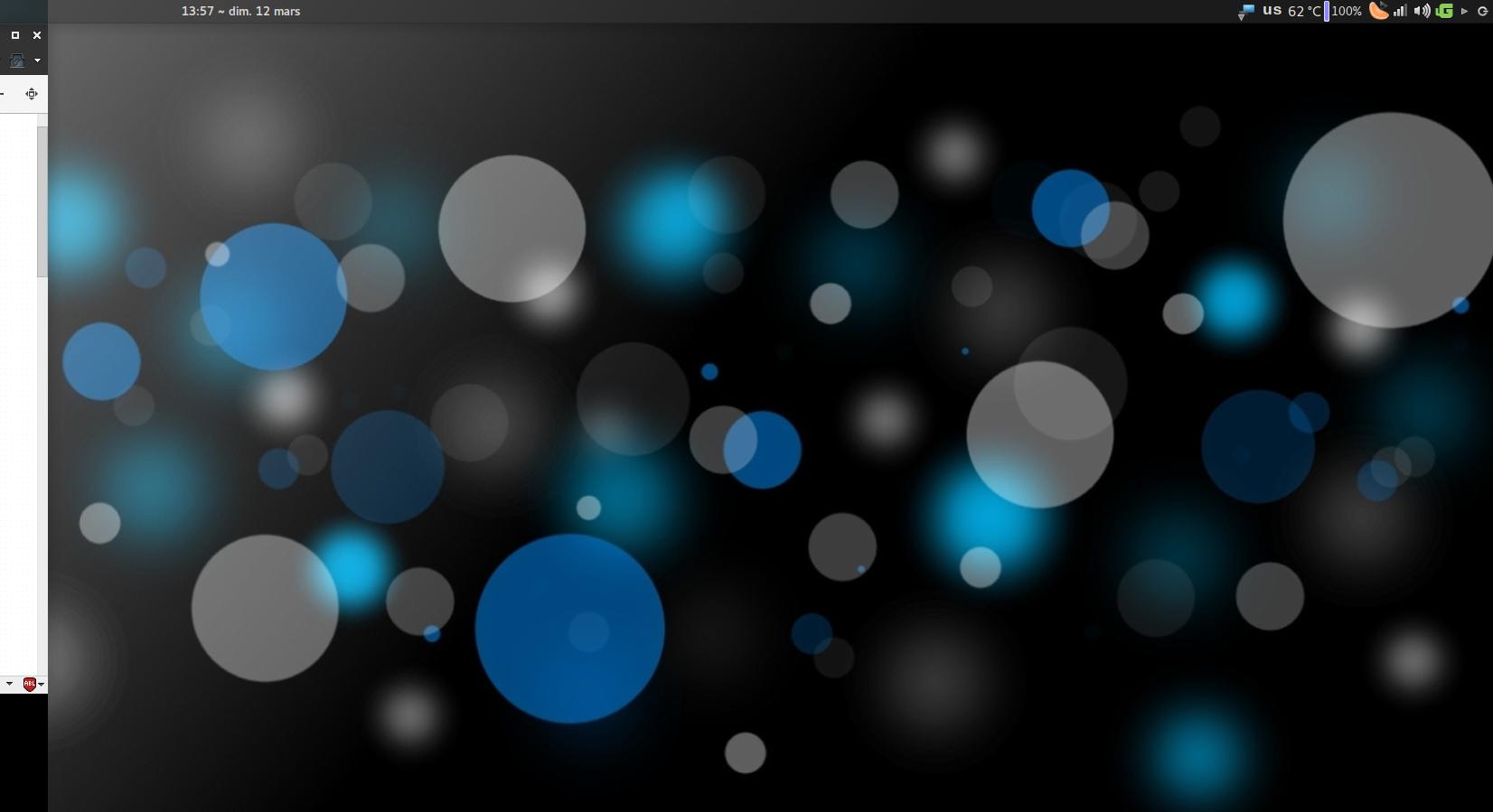 If the 'Span monitors' option is not enabled, the panel will be present only on the primary left external monitor.

I think that this situation is dependent on the basic configuration of Xfce and cannot be changed without changing that base.

Extend to the left external monitor (which thus becomes the primary) then move all controls - namely the panel(s) - to the right (secondary) internal monitor, making it act as if it were the primary. 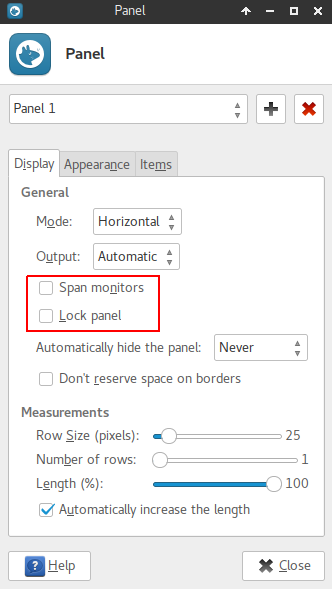 The panel position seems to be remembered after coming back to this display configuration and after restart.

After the command, the windows go on the external left monitor: to have a quick way to send them to next monitor, see this answer.

Try doing this via command line.

First identify the name of your connected primary screen:

Then extend your primary screen to an additional HDMI screen situated to the left:

You might have to play with xrandr options a little after doing this.

Drag your extend display to left and apply 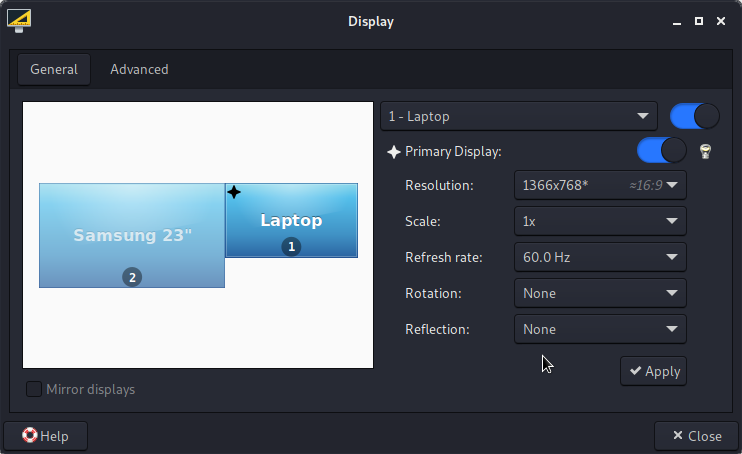 Create new profile, for example : extend to left and you can check automatically enable profile 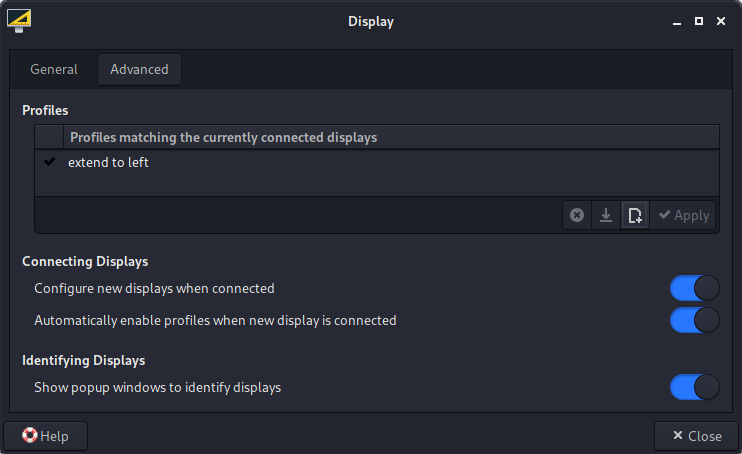 36
XFCE - Send window to other monitor on keystroke

8
How to write bash script to configure my displays when HDMI is plugged in or unplugged
1
XUbuntu 14.04 - Why does my XFCE panel (xfce4-panel) become corrupted after sleep/suspend is resumed?
1
nvidia-settings -load-config-only does not seem to restore saved monitor position settings
1
Is there a way to change KDE4 display settings from the command line?
2
How to permanently setup screen position and order in Fedora 25?
0
size of display connected via HDMI was'nt automatically detected correctly (xUbuntu)