How are session keys, public/private keys generated on the ssh server and client and used?

By the way, is there some reference about how the process goes and uses the public and private keys and session keys on the server and on the client?

Yes. Unless you transfer a lot of data, your session lasts long enough or you force Rekeying (or configure the rekeying to happen more frequent than needed). RekeyLimit option in server and client config.

Each time they are generated, they take private keys and public keys as inputs. Does it mean that the session keys for different sessions are the same, as long as the private and public keys stay the same?

As above. These are keys are generated just for the key exchange. They are not authentication keys nor host keys as discussed before in previous questions.

This is point of the key exchange. I really like this picture below explaining it (from wikipedia). They are generated independently, based on the knowledge of one private key each, but the data that travel over the network (public keys) are not enough to construct this shared secret.

There is a lot information about the SSH protocol. OpenSSH project has a dedicated page with all the standards (RFC's) that are implemented for SSH protocol. Probably most important is RFC4253. Also source code of openssh can explain a lot. 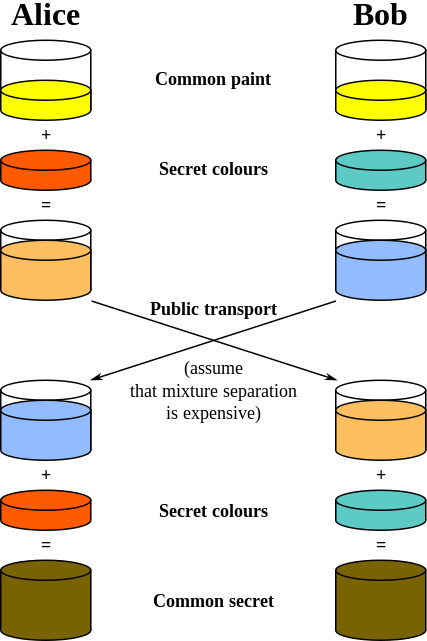 I hope I made it a bit more clear. If there is something missing, let me know.

Not the answer you're looking for? Browse other questions tagged ssh or ask your own question.

2
Should I generate the SSH key pair to give temp access to someone, or accept their public key?
0
SSH client does not offer public key to SSH server
0
Questions about session keys used in ssh
3
ssh private-public key map for client
0
How are the public and private keys stored and related on both client and server?
0
SSH not using public/private keys
0
How can I use public key authentication to access a ssh server on android?
0
When connecting via SSH, does the Diffie-Hellman key exchange take place over an unencrypted TCP session or does encryption occur before the exchange?