What exactly is terminal? What is shell? [duplicate]

I know about Linux terminal. I can also issue many advanced commands over terminal. But one simple concept is not clear to me.

What is terminal and how does it work?

I know about hardware which consists of CPU, RAM, HARD DISK and so on.

I know about kernel which is basically the core of the operating system.

I know about software which sits on the top of kernel.

And I know about users.

And I know that user uses either terminal or GUI to give instructions to the software.(or kernel?)

Now please explain these concepts of terminal and shell.

In simple words, shell is a software which takes the command from your keyboard and passes it to the OS.

So are konsole, xterm or gnome-terminals shells?

No, they're called terminal emulators. They open a GUI to interact with the shell. You can think of them as a frontend to the shells. 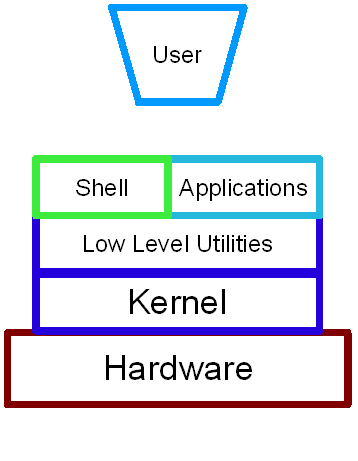 Bourne shell The most basic shell available on all UNIX systems

Korn Shell Based on the Bourne shell with enhancements

C Shell Similar to the C programming language in syntax

Bash Shell Bourne Again Shell combines the advantages of the Korn Shell and the C Shell. The default on most Linux distributions.

tcsh Similar to the C Shell

The shell is the program that runs in the terminal, that reads the commands you type and executes them.

For further reading I recommend Evolution of shells in Linux (IBM)

Edit to add information regarding shells and terminals following comments on another answer:

A terminal is a hardware peripheral that interfaces with a human, it is composed of output to the user and input from the user, in other words of a screen and a keyboard, see link. What the GUI shows you is a virtual terminal. The shell is the command-line interface software that is usually what you see on a terminal, but it doesn't have to be a shell. You could start up a virtual terminal and tell it to run vi directly, for example, no shell involved.

Not the answer you're looking for? Browse other questions tagged linux shell osx bsd distributions or ask your own question.

12
Understanding different Linux Distros
38
What happens when Ctrl + Alt + F<Num> is pressed?
4
What is a device controller, and where does it fit in between the kernel and the device?
4
graphics shell vs graphical shell
0
Character and Block Devices in Linux Permissions
47
How does a linux GUI work at the lowest level?