Mozo menu editor
(default menu editor, version 1.10.1-1+rafaela)
Displays custom application order in editor, application order can be moved within Mozo, but order is not applied to actual Main Menu. This is a screenshot depicting Linux Mint's Main Menu and the Mozo Menu Editor Open side by side:

Alacarte menu editor
(manually downloaded from the Software Manager, version 3.10.0-1ubuntu2 )
Unlike Mozo, displays same order as Mint Menu. Applications cannot be moved within Alacarte, although the "Move" buttons are clickable. Alacarte show, hide and rename edits are available in Alacarte but are not applied to the Main Menu nor applied within Alacarte's list of menu applications. This is a screenshot of Mint's Main Menu, Alacarte Menu Editor, and an application's Launcher properties accessed through Alacarte: 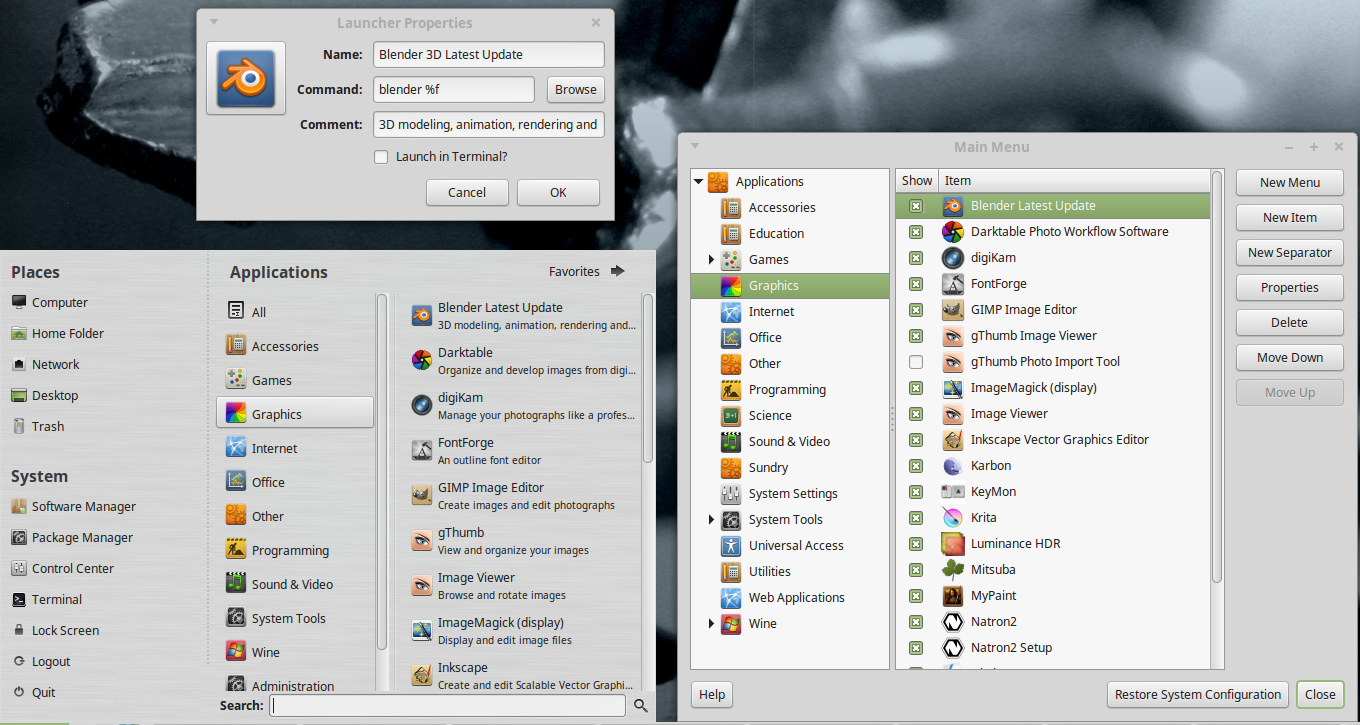 Alacarte was downloaded after I noticed this problem, as it seemed like a possible solution.

Launching Mozo via Terminal does not output anything, moving an application in Mozo's editor, however, gives this Terminal error:

How can I customize the placement of my applications in the Main Menu?

I have found that by replacing the mintMenu menu/item in the panel with a Main MATE Menu, my changes in the Mozo menu editor are actually applied.

I hope that if anyone else has the problem I had, this solution will work for them.

Not the answer you're looking for? Browse other questions tagged ubuntu linux-mint mate-desktop menu user-interface or ask your own question.

2
Linux Mint: How to disable or remove applications comment from favorites menu?
1
How to update KDE menu in Linux Mint without logging out?
1
Mate menu (Linux Mint 17) searches files when pressing enter - can this be changed?
1
I accidentally changed Linux Mint's advanced menu icon to something very large. Now I can't change it back
1
Linux Mint only "File" menu visible on menu toolbar
2
How can I get maximized windows not to hide behind the menu bar on primary external?
0
Adding menu item to MATE main menu via the command line?
0
Xfce on Mint 19.3 with no Applications menu!