What is the proper way to use ISOLINUX with UEFI?

I've been trying to add UEFI support in the 64-bit version of Minimal Linux Live for quite some time, unfortunately without much success. As you can see from the below image, I get critical error each time I try to boot via UEFI. 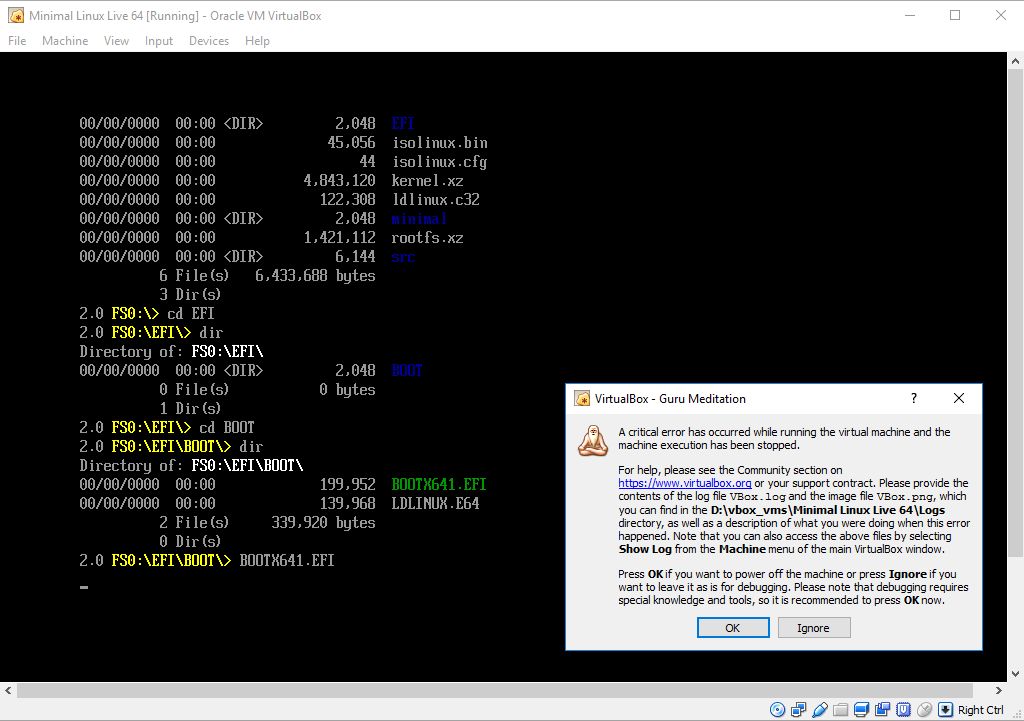 This is what I did in order to get to this point:

So, I can conclude that my EFI stub is getting executed but something breaks during the execution process and at this point I don't know what's wrong.

I checked the ISO image structure of System Rescue CD which I know that supports UEFI and I noticed the following:

That's how I found out that the file \efi\boot\bootx64.efi in "System Rescue CD" has built-in GRUB 2 support, therefore it must be a custom built solution.

So, the problem in just few words - I'm using vanilla Syslinux package and I'd like to create UEFI compatible configuration which boots a simple ISO image. Following the official instructions doesn't seem to work for me.

All suggestions are highly appreciated! Thank you!

Note 1: The ISO image boots fine in BIOS mode. There is no problem there.

Note 2: Most probably this is not a bug in VirtualBox because other operating systems (e.g. Ubuntu and Linux Mint) boot just fine in UEFI mode.

It has been very long time without answer, so I implemented my solution in quite different way:

In this way I lose some of the boot functionality, e.g. vga=ask which works fine in Syslinux but it doesn't work in UEFI mode since this particular boot option requires proper Linux boot loader.

Even though I have solution which works fine, the question is still open.

This is in addition to the previous update. The solution with startup.nsh works only if the UEFI system has 'UEFI Shell' (according to the UEFI specs the firmware may or may not provide shell) and only if this shell has support level 1 or above. Also, there is no guarantee that the startup script will be executed, because the proper way to provide ESP in ISO image is via 'El Torito' boot image. Providing ESP compatible structure directly on the ISO image seems to work fine on certain firmwares but it is not universal solution.

The question is still open but meanwhile I managed to integrate systemd-boot and I no longer consider this issue as high priority.

It sounds more like System Rescue CD uses GRUB, not syslinux. My grub64.efi is about 1MB, but I imagine you can build it with fewer modules included.

I also notice you say "all ISOLINUX configuration files are in the root folder". I can't tell how you created the ISO. Remember that the bootloader needs to be in a special boot image, not the directory tree you see if you mount the iso9660 filesystem. Obviously VirtualBox is booting something so that's not the problem here, but if it's more permissive than other systems then you might still be doing the "wrong" thing.

The hybrid boot images set up by "several popular Linux distributions" are highly entertaining to read about, but the last I read it wasn't quite possible to have a single image supporting all of Mac, 32-bit EFI... there are at least firmwares that see multiple of the boot images and ask the user to choose between "1" and "2". Just a note before anyone tries going down the rabbit hole, at least with the Mac-specific support, it might be safer only to implement the parts you're able to test.

Not the answer you're looking for? Browse other questions tagged boot uefi iso syslinux or ask your own question.

9
Boot iso file through uEFI by calling EFI executable inside the iso
1
How to make a UEFI bootable ISO image with grub-mkrescue?
3
How can I tell if the Debian installer has booted in UEFI mode or not?
3
How to register debian uefi file with my motherboard?
0
How can I get an ESXi installation to PXE boot using UEFI?
0
Is ISOLINUX on DebianStretchDVD1ISO extensible in any way without remastering - what can you do with it besides boot /install.amd/vmlinuz?
6
What is the relation between UEFI and Grub?
1
Why won't USB with custom iso boot UEFI?