What linux DHCPv6 client can I set up so it requests a prefix on one interface and then on all the other interfaces it will give out addresses (or if requested, a smaller prefix delegation)? It would also need to set up the routes and router advertisements.

If there's not a way to do this, what is the IPv6 version of programming an IPv4 router to do NAT, wherever it is put? Basically, I'm trying to understand how a manufacturer would set up their IPv6 capable routers so a customer can plug them in and they would work. I'm not talking about actual NAT in IPv6, but a way for a router to have a DHCPv6 prefix delegation client which would take the prefix it received and break it into smaller prefixes and addresses and run a DHCPv6 server for each separate downstream link.

I added a diagram: 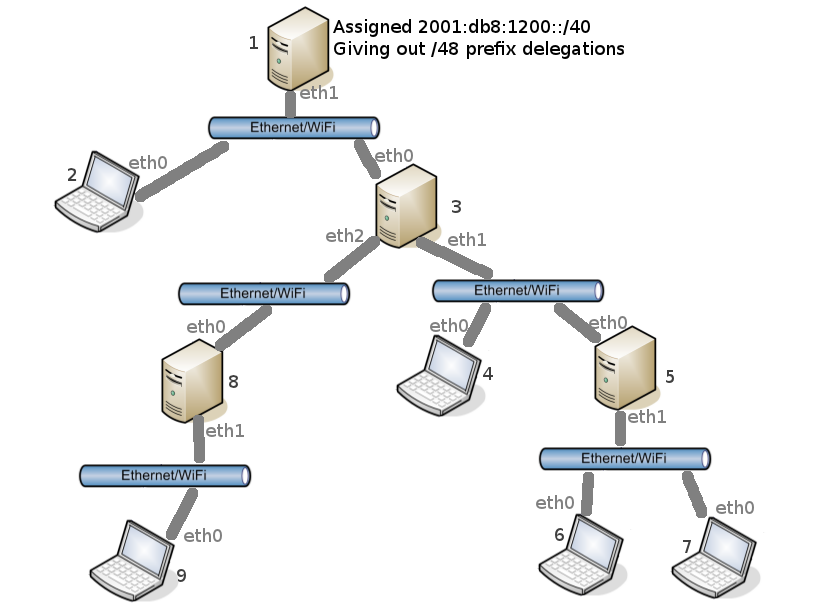 Is there (a) piece(s) of software I can run on Linux that could be configured once and then put in place number 3, 5, or 8 and it would automatically set itself up depending on the prefix it was delegated?

This isn't a complete answer, since I'm still working through some of the problems, but here's what I've got so far, trying to deploy a near-identical setup (though for somewhat different reasons).

The good news is: it can be done, within the specs. In fact, the specs were explicitly designed to encourage this sort of subdelegation of prefixes, largely to avoid the need for painful multiple NAT layers while still allowing flexibility in how networks are structured.

The bad news is: there are no "out-of-the-box" single pieces of software that will request a prefix from an upstream, configure addresses and routes locally, and hand out sub-prefixes to downstream networks. Hell, it doesn't even appear possible to wire up pre-existing pieces of software in Linux (without patching) to do what needs to be done. Worst of all, it doesn't look like anyone really cares about this.

What I've got setup and working so far looks like this:

What doesn't already exist, and which I'm pretty sure requires patching source code, is setting up routes when a prefix gets delegated. So far as I can see, no DHCP server has the built-in ability to add the route automatically (I've carefully examined WIDE dhcp6s, it certainly can't do it, and I can't find anything on the 'tubes to suggest that ISC DHCP does it). There isn't even the ability to run an external command that takes the prefix being delegated and the client's link-local address (ISC DHCP has on commit { execute(...) }, but no way to get the client's link-local address to pass out).

The problem is that without this crucial bit of functionality, the router that's making the delegation can't know where to route the traffic for the prefix to afterwards. That's a fairly fundamental limitation, and I'm rather stunned that nobody appears to have dealt with this problem before -- or if they have, they're keeping really quiet about it.

I've just developed a patch to ISC DHCP to provide an extra "data expression" to the eval functionality; this allows me to shell out to an external program which can then add/remove routes on prefix allocation and release/expiry; the patch is available at https://github.com/mpalmer/isc-dhcp/commit/4c8ae763bcf83c9068d57a5d9f570690a581b6d6 (against ISC DHCP 4.3.1); I don't have a script to add the route (yet), but I'll probably add it under contrib in that branch once I get it written.

ADDENDUM: It turns out that further modification was needed to allow routes to be removed again; that has now been added to the client-address-data-expression branch, along with a small Ruby script that shows how it can all be combined together.

The program that does prefix delegation is radvd (Router Advertisement Daemon). Other IPv6 hosts on the link should automatically configure a globally routeable address from the announced prefix.

IPv6 does not require NAT as hosts which require Internet access are expected to have globally routeable addresses. You need to be careful in your Firewall rules to prevent infiltration from the Internet.

ISPs are expected to give out a /48 or /56 network block to their customers. This requires a bit of smarts on the ISP side to ensure each router gets a unique block. One /64 block will likely be used as the uplink to the IPS's network. The router is then free to announce as many /64s as from the rest of the block as it wishes. Likely only one would be used in this scenario.

There is an IPv6 DHCP implementation as well.

One quick setup which has been done is to configure the router to use 6to4 tunneling. radvd will autoconfigure for this setup, but it requires a publicly routeable IPv4 address.

EDIT: While radvd can't subdelegate prefixes it can automatically announce a /64 prefix based on an available routeable addresses. It also has Base6to4 to automatically announce the 6to4 prefix of the router. Subdelegation requires some planning and is beyond what should be expected of a plug and play configuration.

EDIT2: Like IPv4 IPv6 does not have a method to determine which network belongs on the networks connected to eth1 or eth2 base on the address assigned to the eth0 interface. Once you have multiple network segments you need to begin managing the addresses assigned to each segment. The good news is this can usually be done once.

IPv6 makes it easier as 5 and 8 can easily be given /49 or /50 subnets of the /48 delegated to 3. An alternate approach would be to configure 3, 5, and 8 as bridges on the same /64 subnet. In such a configuration, they would work as switches. Automatic subnet generation risk routers 5 and 8 both choosing to delegate the same subnet.

Plug and pray routers for home use just use a default private address block. They quickly break down when configured as shown in your diagram. Mixing routers with different default address blocks may work. Otherwise you need to ensure each router has different block of addresses.

I found out that dibbler dhcpv6 server exposes the necessary information to its AddrMgr.xml file. It contains the link-local address of the requesting router and the delegated prefix. I‘m going to experiment with this later.

I wrote a small PHP file that can create all the routes just by reading the XML file. How to use:

* * * * * php /var/www/html/routen.php Then save the file. Done! When you connect another router, it takes a few seconds up to one minute for the routing table to update, but then it works!

Not the answer you're looking for? Browse other questions tagged dhcp ipv6 or ask your own question.

8
How can I disable automatic IPv6 neighbor route advertisement on a router?
2
Host part of DHCPv6-assigned router address
17
How to get Pi-Hole to work with IPv6?
2
Linux IPv6: Specifying policy routing table for default gateway learned from a router advertisement?
1
dhcpcd dhcpv6 times out after Router Advertise, never sends a DHCPv6 Request