I don't have a general problem with XTerm and Unicode. For the most part, things are working. This works great:

Rather than the expected output (⤷, aka ARROW POINTING DOWNWARDS THEN CURVING RIGHTWARDS) I get the dreaded box. I'm currently using:

This is the same font I use with gnome-terminal, which displays the same character correctly. I've also tried the same thing with a variety of other monospace fonts (Droid Sans Mono, DejaVu Sans Mono, Liberation Mono), which all have the same behavior in XTerm (but work fine elsewhere). In fact, looking at the characters between \u2620, which displays correctly, and \u2937, which does not, there are a number of characters that don't seem to display correctly in XTerm:

I'd like to understand what's going on here. Why does XTerm have trouble displaying some of these characters, but not others?

fonts xterm unicode
Share
Improve this question
edited May 3 '16 at 23:33

short: xterm uses a single font (except for the special cases of double-width characters), while the other terminals use additional fonts (and they use those fonts for the characters not found in your requested font).

long: the character you are interested in is not part of the font, which appears to be something like fonts-hack-tty in Debian. The missing code is 0x2937, which you can see using xfd -fa hack is not supplied by the font (hint: the first on the page is 0x2987): 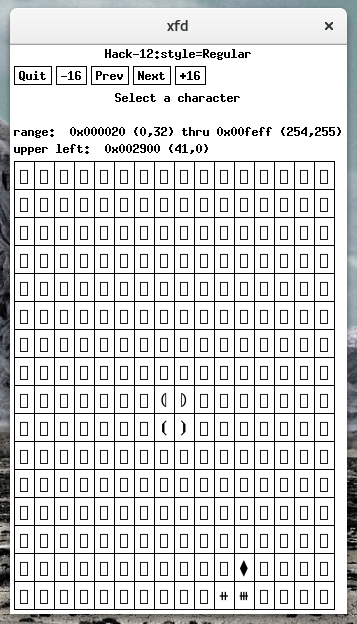 The short description of the font gives its intended use:

No frills. No gimmicks. Hack is hand groomed and optically balanced to be a workhorse face for code.

which (since "code" generally is the POSIX character set, plus whatever people think makes good comments) is likely to be small. This example has more non-POSIX characters than the usual. Starting with the ASCII+Latin1: 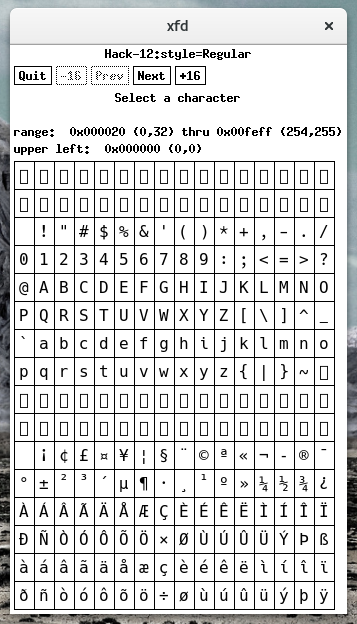 there are a few hundred glyphs in the font (another dozen screenshots would be needed to show these, though more than half show a small number of glyphs). The second page for instance is partly supported: 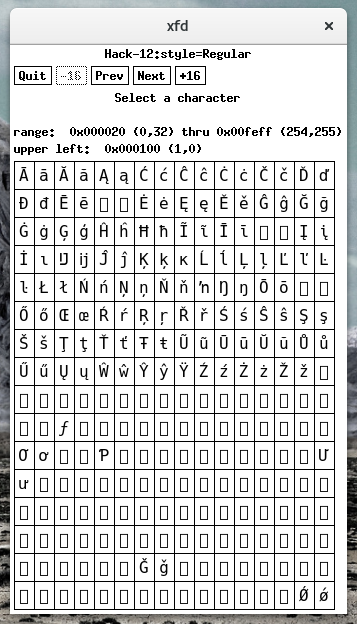 Prompted by a comment, I traced gnome-terminal to see that it loads these font files:

and that 0x2937 is supplied by the last one. The actual details may differ on your configuration.

Not the answer you're looking for? Browse other questions tagged fonts xterm unicode or ask your own question.

6
Xterm does not display one uni-code character