I have a frequent problem that occurs with window-based desktops like Cinnamon or XFCE, especially on multiple monitors.

I very often misread which Window has focus after Alt-Tab. So I will start typing, and it ends up in the wrong window.

Cinnamon has a number of options for the Alt-Tab:

I imagine a decent solution would be to somehow give the nono-active windows subtly different colors. And maybe show a "spotlight" jumping from one window to the next..

This might all better fit into a feature request. But someone knows an existing solution to the problem?

I also struggle with knowing which window has focus (irrespective of how it got i).

I have switched on the glow feature of oxygen theme in KDE's plasma. I now have a different glow around active and inactive windows. I also set a matching title bar colour. Green for active, and red glow / gray title bar and border for inactive (but the borders are very thin). 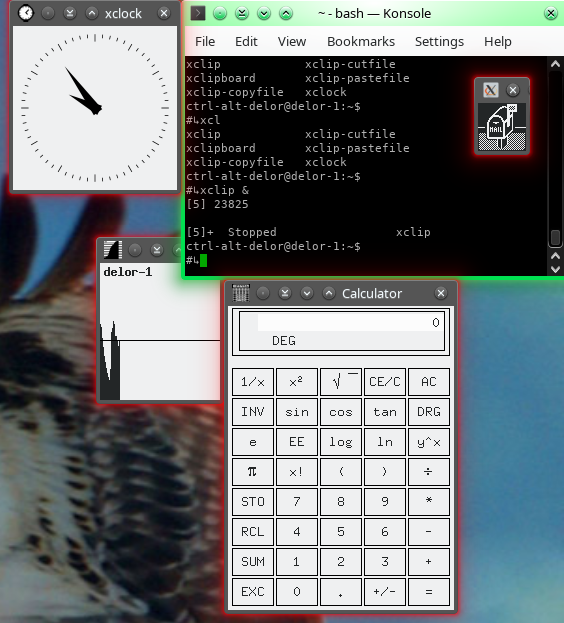 It has made a big difference.

I then added an effect to move slide back windows: window move (temporarily out of the way) to let the other pass. This helps me keep track of where things have gone (a sub-conscious hint, linked to real world physics).

I chose KDE plasma for these features. (You can install it and probably start it (replacing cinnamon) without even logging out.)

Not the answer you're looking for? Browse other questions tagged window-manager cinnamon desktop or ask your own question.

8
Getting visual feedback of workspace switch in xfce
5
Alt+Tab on Fluxbox
5
Lowres application icon on window switching (alt-tab)
1
How to get cinnamon window styling
6
Window with activity in GNOME, notifies but doesn't show itself after Alt+Tab?
1
Xfce: How to specify row size in Alt+Tab window?
10
how to hide a window from ALT+TAB in cinnamon?
7
Cinnamon Getting rid of CTRL-ALT-A shortcut
1
What program is responsible for drawing the wallpaper with Cinnamon