Avoiding a buggy kernel version with "Oops" in radeon module

I have exactly the same problem as described here. I can find the same "Oops" messages in /var/log/kern.log. I also have an older Radeon HD (so I have to use the free driver). I downloaded the current Debian DVD image, installed it, and my PC is completely unusable, always freezing after a couple of minutes.

So from what I understand, this is a problem with a patch, which is working in newer kernels, and was also applied to older kernels (like 3.16.0-4 — which is used in the Debian 8.3 now) where it causes this horrible bug.

Short answer: Linux kernel 4.4 does not have this bug. You should not run into it on Ubuntu 16.04 LTS.

If you follow the email chain that you linked, you'll get to this message by Nicolai Hähnle:

Kernels that contain commit 954605ca "drm/radeon: use common fence implementation for fences, v4" are safe, older kernels require a NULL-pointer check around the call to radeon_fence_ref.

Here is the commit he's talking about on kernel.org. For a more useful visual, here is the same commit on GitHub. On the GitHub page, if you expand the list of commit branch and tag labels, you can see that the commit is included in the tag for the 4.4 kernel (see image below), so you should be fine. 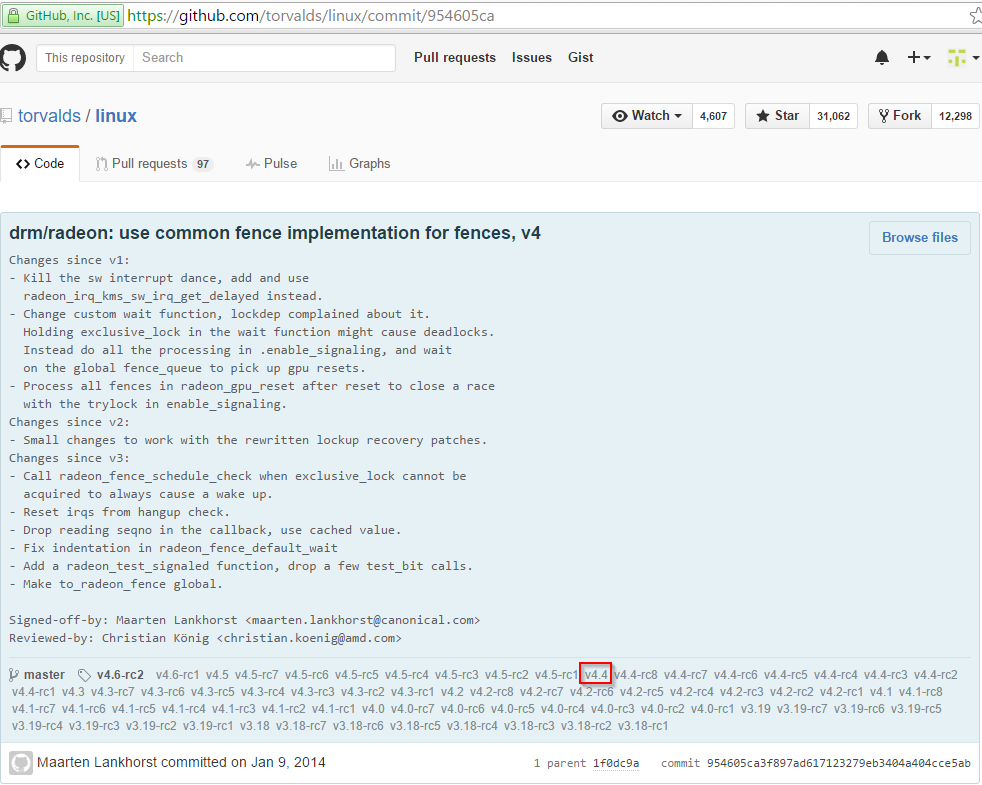 If you really want to be sure, you can probably boot a LiveCD or USB key running Ubuntu 16.04 LTS (currently still in the beta stage of its release cycle) to test it on your computer.

Edit 2: You can also, as fduff points out in this comment, install a different kernel version on your existing system. Though, I think that's a bit outside the scope of the question you posed, which was simply, "So if I install Ubuntu 16.04 LTS with Linux kernel kernel 4.4, I will not get this bug? Yes or no?"

Not the answer you're looking for? Browse other questions tagged linux-kernel kernel-modules bugs or ask your own question.