Why does Linux not allow `cat`ing a directory? [duplicate]

I read in The Design of the UNIX Operating System that directories are files containing the names of each file they contain. So I tried cating one on my Mac, and it resulted in an error: cat: ./: Is a directory

But I then tested it in System 7 UNIX, and it worked. 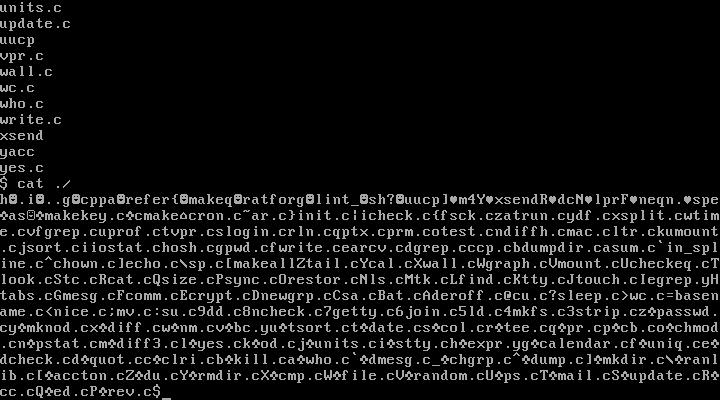 Why does this not work in modern operating systems? Is a directory no longer a file, or did someone decide we shouldn't be able to read them?

I believe Version 7 Unix only supported a single file system. Modern operating systems (including Linux) support many, many filesystems. There's a "virtual file system" layer of code in the Linux kernel to make all those different filesystems act like what Posix and Linux programs expect. For example. Linux can use variouis MS-DOS filesystems, and NTFS, and the permissions that files in those systems have is not exactly the user/group/other, read/write/execute that Linux wants. So the virtual filesystem code does the work of reconciling them. Since some filesystems (MS-DOS FAT filesystems and ReiserFS are examples) don't have directories as files, the virtual filesystem code doesn't treat directories as files with a special mark on them, like the Version 7 UFS does. You can do an open() system call on a directory, but you have to use the getdents() system call to read entries from directories.

They are still files in the sense that "everything in UNIX (and Linux) is a file". The cat program has gotten smarter and realized that "this is a directory type of file, so displaying it as if it were a text file makes no sense", thus the newer behavior.

Not the answer you're looking for? Browse other questions tagged directory cat or ask your own question.

31
When did directories stop being readable as files?
8
octal dump of directory
0
True contents of a directory in a *nix system

3
Are there widespread filesystems which represent directories with structures optimized for fast lookup?
8
Why does pipe not work with cat and locate?
16
Why does "cat ttyUSB0" not produce output?
32
Simple way to see the content of directories in Linux/UNIX file systems
12
Why does "cat {foo}" not output foo, but "cat {foo,bar}" does?
1
grep giving no output for a directory passed in a variable
0
Concatenating files from a directory using cat gives "No such file or directory" error
0
Why does "grep foo bar" print "grep: bar: Is a directory" instead of printing any filenames in bar/ that match the pattern "foo"?