(Edit: This applies to much more than postfix; it's just where I noticed/debugged it)

I've installed postfix, but when it starts up and creates its chroot, it gets an empty copy of /etc/resolv.conf which means it can't resolve any domains.

I added some logging in various network scripts to see when resolve.conf is being wiped/re-populated and when postfix is starting...

Note there are 7 seconds between resolvconf being called to wipe the config and then re-populate it. For this period, /etc/resolv.conf is effectively empty. It's between these calls that postfix (and many other services) starts up.

It seems strange that services are being started in this huge gap between resolvconf being cleared/recreated.

This is a clean install of Raspbian with Postfix installed and no other changes.

EDIT: Looking in syslog, there are actually tons of things failing due to no DNS in the period between dhcpcd starting and finishing. Seems flawed that other services are trying to start concurrently?

Ok, after many wasted hours, I found this in raspi-conf... 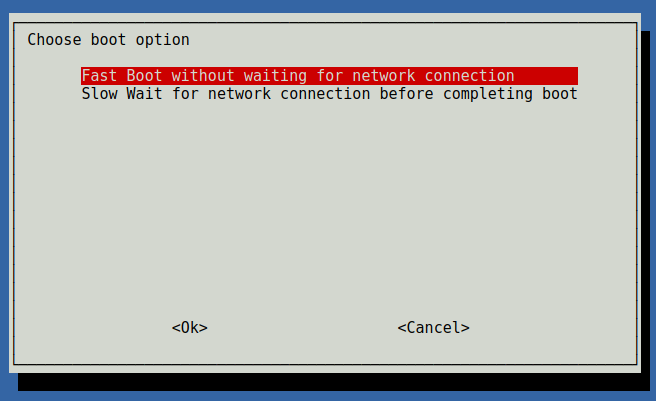 So it seems this is broken-by-design. The default of "fast boot" comes at the expense of random failure. On a clean Raspian install even without postfix installed, my syslog contains lots of DNS errors from various scripts during the DHCP process.

So, the fix is to set this to "Slow" boot, which creates a script that waits for the network at boot. Edit: You can script the call to raspi-config like this:

This fixes both the postfix issue that I noticed, and also clears up a ton of DNS-related errors normally written to syslog at boot.

I think as default behaviour, this is crazy. I've posted feedback on GitHub.

Another way to handle this is to recopy resolv.conf after the network is fully up. You can do that with systemd by placing the following into a file in /etc/systemd/system and call it something like fixpostfix.service, then run sudo systemctl fixpostfix.service. Now, after each reboot, once the network is fully online, this will copy the properly filled-out resolv.conf

There is also another thing that must be taken into account, for precedences services into a server that has an IP address given by DHCP.

dhcpclient by default does not wait for the IP address. While you might not be interested into changing that in a workstation, in a server that creates precedence problems.

So dhclient is invoked by default with the -nw option that according to the manual:

-nw Become a daemon process immediately (nowait) rather than waiting until an IP address has been acquired.

This precedence was giving me some problems (e.g. BIND did not boot right, even with a restart in the DHCP exit hooks)

I have changed my eth0 from:

Not the answer you're looking for? Browse other questions tagged debian network-interface postfix init.d or ask your own question.

2
Why does postfix copy /etc/resolv.conf to its chroot too early, causing DNS failures?

3
How do I identify why my login hangs for 20 seconds at startup?