Routing Problem with IP Forwarding on Ubuntu 14.04 and VirtualBox

I have a routing problem with IP forwarding on my ubuntu server.

On my ubuntu server (an old laptop) I have VirtualBox installed with a number of virtual machines. Each VM has it's virtual NIC bridged to the physical wlan0 adaptor on the server, and if set to use DHCP they will happily get an IP address from my home wireless router. So bridging seems to be working fine.

Some VMs have static IPs set up on different subnets which are awkward to change due to the applications running on them. I have two VM subnets:

I thought I could get them all happily talking by giving my host laptop an IP address on each subnet, pointing the VMs to the appropriate IP as their gateway and then enable IP forwarding on the host. So the host has the following IPs assigned to wlan0:

I guess the config on the host is lacking something, but i can't see what the difference is between VMs in each subnet pinging each other, and VMs on either subnet pinging the router on a third subnet - other than that it's a physical device - i'm still just asking the host to IP forward from one subnet to another. What's the difference that i'm missing?!

Edit - diagram below for clarity. It shows attempted pings between virtual machines, the host and the router. 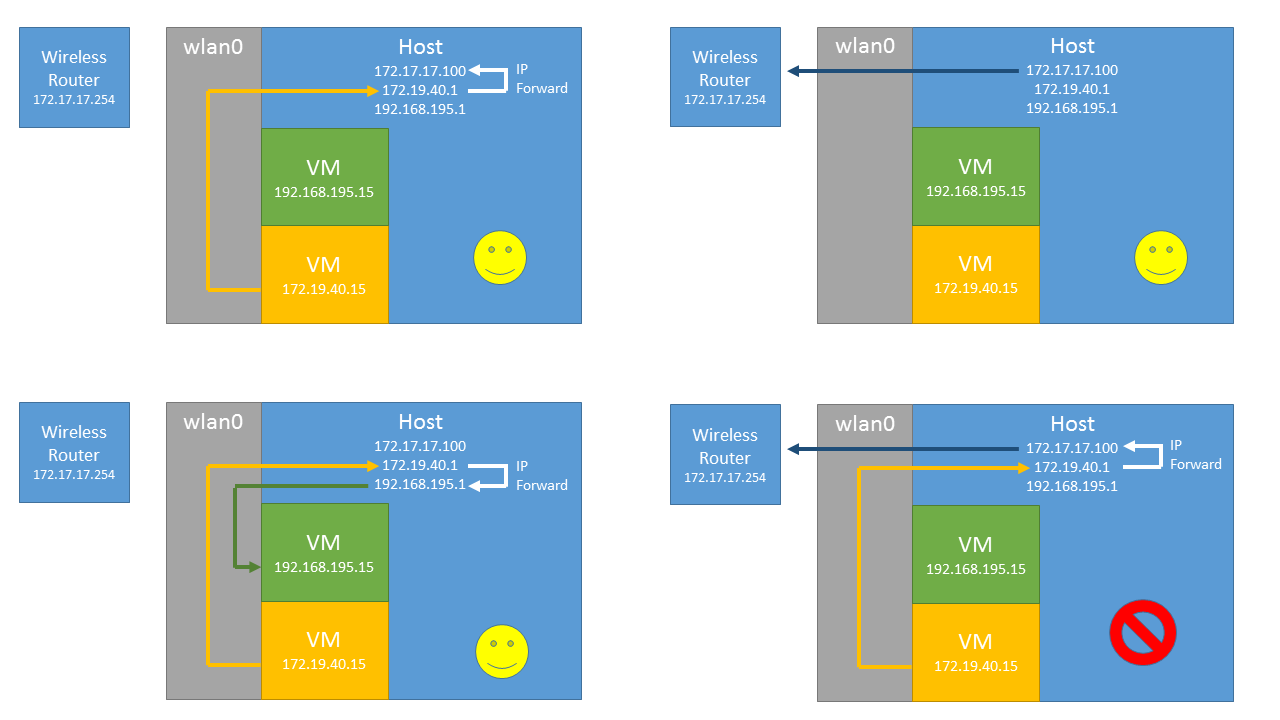 You need to have rp_filter for a bridging host to accept outputting packets that are not own of their own range of IP local IP addresses.

As for routing, the problem is that the router does not know the 172.19.40.x network, and while the packet reaches the router, the answer goes by the default gateway (i.e. an unknown network, instead of coming back).

You need to define in the router the route (e.g.)

Doing that, the answer will return to your host.

On second thought, this might not be the right answer, and as it it bridging, you will have to give the router a secondary IP of the 172.19.40.0 network.

you need to add a few routes on your wireless router.

Go into your wireless router manual and find how to do static routes. I had this same issue and the router did not know how to send traffic back to the server since they are on different subnets. You need to create that path back from your router to each subnet.

Not the answer you're looking for? Browse other questions tagged debian virtualbox ip network-interface or ask your own question.

5
Virtual Wireless Access Point
2
Share an external IP with several virtual hosts
3
VMs “forgetting” MAC address of gateway on Ubuntu 14.04 host set up as a gateway using 1 NIC with 2 IP addresses on different subnets
1
Virtualbox - how to give Internet access and internal network access to two VMs?
1
Linux routing two different LANs with two different gateways
2
Will both VMs having the same IP cause me to ping myself
0
Routing problems when activating IP forwarding