Is there a distribution that supports rolling back updated packages?

Is there a tool or even an entire distribution that supports rolling-back changed packages after an update?

As an example: I upgraded packages A, B and C. After working with those packages for several days, I encounter a bug in B that is deal-breaking.

While I'd submit a bugreport, I'd also need to downgrade B to the previous version so that I can finish what I was about to do. Meanwhile A is dependent on B, so it'd need to be downgraded as well, but C is independent of both, so it could stay at its current version.

Is there a tool or a distribution that supports this?

I know that most distributions have a way of downgrading a package but that's usually kind of sketchy or not even possible because the previous package was removed from repositories and it some cases (for example after upgrading the X server and Mesa) it gets really... messy.

NixOS supports upgrade rollbacks, although as I understand it, it doesn't go quite as far as you'd like: if you upgrade A, B and C in one operation, you can roll that entire operation back, but not just A and B. (You should be able to roll A, B and C back, and then upgrade C...) That makes sense from a transactional perspective though.

Debian (in combination with the snapshot archive if you no longer have the old packages) will allow you to downgrade B, and tools like apt or aptitude will in many cases figure out that A also needs to be downgraded (once you've convinced them that you don't want to simply upgrade B). But as you say that tends to be somewhat messy, and package downgrades are unsupported in Debian anyway (which means that most of the time they work, but if they break it's not a bug).

On any yum based distribution (e.g. Red Hat EL, CentOS, etc), you can:

There are some obvious caveats:

In my example, that < in the row with ID 4 (in the last column), means I cannot rollback past that point.

On OpenSUSE you can easily use Snapper with the Btrfs filesystem.

If you use the standard file-system configuration during installation, it is enabled by default.

Once Snapper is enabled, it is fully integrated with yast2 and zypper. It will create a filesystem snapshot every time you'd install or upgrade something (or create an user, etc).

To rollback the system to a previous condition, you have only to run yast2 snapper. 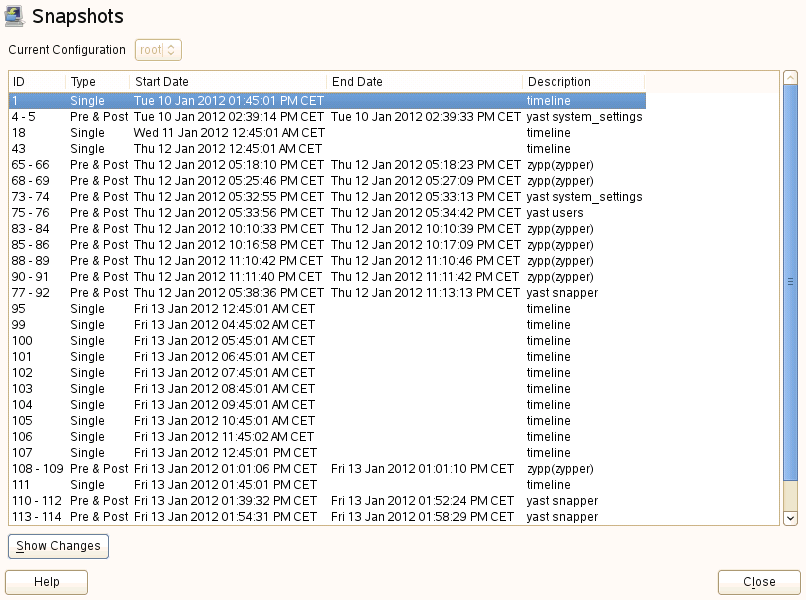 AIX is very good at rolling back updates. Well - we're on Unix/Linux site and you've never specified you want Linux :)

Each single AIX update saves all the modified files in a separate subdirectory inside /var filesystem. The update can be reverted with a simple native command, and the revert doesn't need the network to be up, it doesn't need any media/packages, it doesn't re-install anything and it doesn't depend on any snapshot technology - the effect is simply that the files re-appear as they were before the update.

As a bonus, there is one trivial native command mksysb to create a bootable stand-alone system backup. The file that can be simply booted on a completely dysfunctional system that doesn't boot up due to some malfunction/corruption.

And it's all proven technology with decades of history :)

In Fedora (and I'm sure in other distributions too) you can ask to go back to a previous version:

gets you the next-to-last version of the packages, and you can ask for a specific one by:

This only works if the package(s) are still available in the repositories. The functionality isn't unheard off, by any means. It has its snags, if part of the upgrade was to change configurations, the rollback won't necessarily be to the exact past version.

Arch Linux also supports downgrading packages and the kernel. You can also install the downgrader and downgrade tools to automate the process. The btrfs solution also works, I have used it to do a manual rollback before.

How I rollback my system:

One benefit of btrfs is that you can use subvolumes and dynamic "partitions." For instance, I have a subvolume for / (called @), /tmp (@tmp), and /home (@home). It is then easy to back up and roll back any of these. I have /tmp in a separate subvolume because backing it up with the rest of the system seems pointless, since it is erased on almost every reboot.

I use Arch Linux and it stores all downloaded packages to /var/cache/pacman/pkg/ so you can downgrade any package anytime (of you are unable to boot, use a live usb). From Arch Wiki:

To prevent package from being upgraded, include the package name in /etc/pacman.conf, like:

To save space you can clear the cache folder with:

Which will delete all older packages and keep the newest one, or use -Scc to remove all.

Not the answer you're looking for? Browse other questions tagged package-management distribution-choice or ask your own question.

0
CentOS 5.5 Install Customization
13
Looking for tools to build minimal linux desktop
1
Best rolling release distribution for MacBook Pro
5
Equivs: enhance or update an existing package without uninstalling?
3
How to Print Summary of Packages that Can be Updated?
3
how to do version-specific backup/restore of Debian packages?
0
How to handle files that should exist after a dpkg downgrade but are deleted instead