Ask Question
Asked 4 years, 11 months ago
Active 4 years, 10 months ago
Viewed 33k times
24
This question already has an answer here:
How do I go about tracking down IO usage in Linux and other *nix OS'? (1 answer)
Closed 2 years ago.

In a Ubuntu 14.04 server I am experiencing a massive hard disk activity which has no apparent justification: it comes as a burst, it lasts a few minutes and then disappears. It consumes system resources and slows down the whole system.

Is there a (command-line) tool which can be used to monitor the disk activity, listing the processes that are using the disk and the files involved? Something like htop for the CPU.

For checking I/O usage I usually use iotop. It's not installed by default on the distro, but you can easily get it with:

Then launch it with root priviledges:

The --only option will show only the processes currently accessing the I/O. 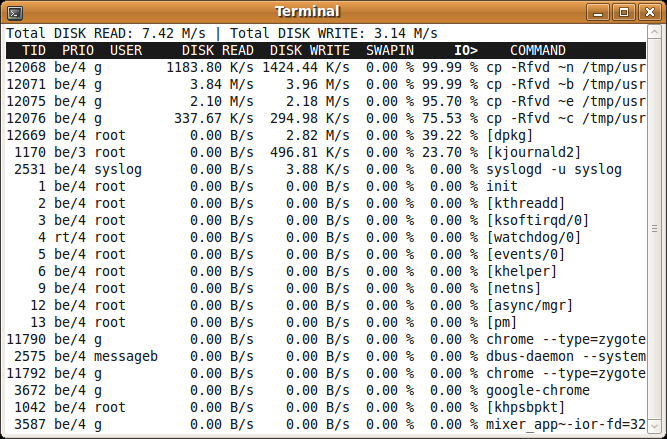 You can also give try with:

atop - AT Computing's System & Process Monitor

It has a similar interface to htop.

collectl tool can also play the role of utilities that are designed with only a specific purpose such as top, ps, iotop and many others.

For example the following command collectl -sc can be used to monitor the summary of the cpu usage.

The following command collectl -sd will help you to monitor the disk usage.

You can also use collectl -sD to collect data on individual disks, but you have to know that information on total disks will not be reported.

It is very easy to make collectl work as the top utility, just run the following command in your terminal collectl --top and you will see the similar output the top tool gives you when it is executed in your Linux system.

to use the collectl utility as the ps tool run the following command in your terminal:

You will get information about processes in your system the same way as you do when you run the ps command in your terminal.

the summary list of subsystems supported by the tool:

collectl visualised through graphite or graphiti: 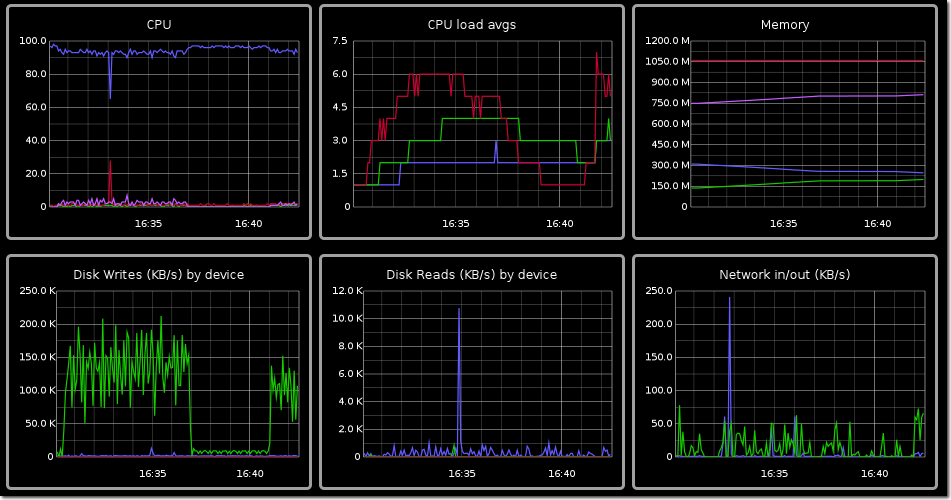 Not the answer you're looking for? Browse other questions tagged ubuntu command-line hard-disk monitoring or ask your own question.

16
How do I go about tracking down IO usage in Linux and other *nix OS'?

7
Make iotop show only the most disk-intensive item
2
Simple way to keep hard disk alive on activity?
1
Monitor a hard disk partition
5
monitor disk writes by directory
0
Hard disk usage 100 % without any read or write activity
4
Why does I/O cause my system to become almost nonresponsive, and how to fix it?
0
How to check Hard Disk speed?