What does it mean to set a terminal's “icon title”?

I generally see the syntax for setting the terminal title as (something like):

But I noticed this answer used 2 instead of 0, which prompted me to do a little more digging. According to this document you can actually set both the "icon name" and the "window title" with this syntax:

But it doesn't go on to explain what exactly it means by "icon title" or "icon name". When I try it out I don't see any difference between 0 and 2, and 1 doesn't appear to do anything.

So what is the "icon title", and what is supposed to happen when 0 or 1 is called?

This is X11 code perhaps ignored or unimplemented by modern Window Managers. Luckily, I don't run a modern Window Manger, so with FVWM on OpenBSD, I can set the icon name to blah, then minimize that xterm: 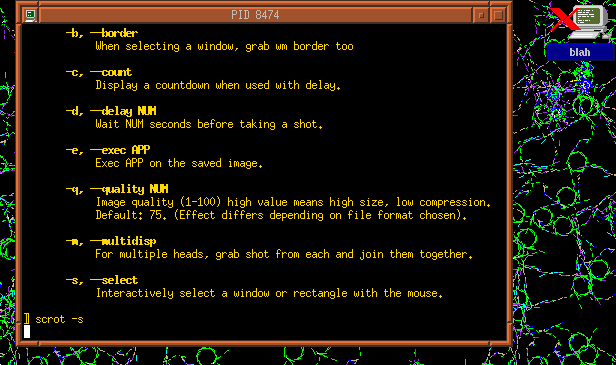 Which produces an icon with that name.

The Xterm Title HOW-TO is simplified. From XTerm Control Sequences

Some applications (such as screen) know about the three possibilities (0=both, 1=icon, 2=title), though it took a while to get to that point (see fix).

According to the XStoreName manual page

The XStoreName() function assigns the name passed to window_name to the specified window. A window manager can display the window name in some prominent place, such as the title bar, to allow users to identify windows easily. Some window managers may display a window's name in the window's icon, although they are encouraged to use the window's icon name if one is provided by the application. If the string is not in the Host Portable Character Encoding, the result is implementation dependent.

The WM_ICON_NAME property is an uninterpreted string that the client wants to be displayed in association with the window when it is iconified (for example, in an icon label). In other respects, including the type, it is similar to WM_NAME. For obvious geometric reasons, fewer characters will normally be visible in WM_ICON_NAME than WM_NAME.

Clients should not attempt to display this string in their icon pixmaps or windows; rather, they should rely on the window manager to do so.

The encoding mentioned for XStoreName is a clue. It is not UTF-8. After several years (around the early 2000s), of introducing Unicode strings into applications designed for ISO-8859-1 (Latin-1), e.g., this gem, some window manager developers came up with Extended Window Manager Hints to rectify the situation and provide for extensions. It uses different window properties, e.g., _NET_WM_ICON_NAME

The Client SHOULD set this to the title of the icon for this window in UTF-8 encoding. If set, the Window Manager should use this in preference to WM_ICON_NAME.

Again, this is optional. Desktop developers may have different ideas about how to show icons, and graphic images seem to have gotten more attention, usually at the expense of accessibility. However, it is still part of the standard, used by a few window managers such as fvwm, twm, ctwm. If someone were to make an accessible version of KDE or GNOME, they might use this property.

Not the answer you're looking for? Browse other questions tagged x11 xterm window-title or ask your own question.

77
How to rename terminal tab title in gnome-terminal?

4
How do I make the Xterm window title switch between the current running command and the current path?
7
What's the right value of $TERM for emacs' ansi-term, especially if 'eterm-color' isn't available after SSH?
11
In xterm, what is “Icon Name”?
3
No window title bar when X Toolkit “-title” argument ends in “lock”
0
Xterm Set Title?
1
Screen window title reverts after running a command on my new machine
2
xterm: #xxxxxx into 0-255 color conversion - how?
1
Cannot display 8-bit characters in xterm in ubuntu 18.04
1
Using scroll regions in xterm with less
0
How to set zsh shell title without executing command substitutions twice?