I have a Toshiba Laptop with Fedora 22 installed, the monitor for the Toshiba is a 17 inches and I now have a RCA Tv as a secondary monitor and it worked just fine! But I tried to invert things and have the TV as the primary monitor and the laptop screen as the secondary. After I did that change in the display settings, well, I lost the resolution for the tv (which was 1366x768 I think.)

I tried adding a new mode with this tutorial and it didn't worked!

Do you have know any way that I can go back for the right resolution on my secondary monitor? I'm even considering uninstall Fedora 22 and install Fedora 23. Would that work?

This is the max resolution I'm allowed to set for the secondary monitor on Display. Any help would be so much appreciated. 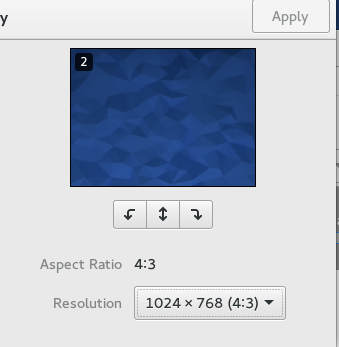 I tried adding the mode to the output (the tv) doing the following: xrandr --admode VGA1 1366x768 and the monitor goes black and the system ask me if I want to keep the changes, I say yes but the monitor comes back with the same resolution 1024x768. Sigh...

Try to use arandr , that's just a GUI in fact but can be very helpful. Also when I had a similar problem on my notebook ubuntu xrandr guide helped me.

Not the answer you're looking for? Browse other questions tagged fedora multi-monitor laptop resolution or ask your own question.

3
Flash fullscreen on secondary (bigger) screen doesn't work
4
Fedora 18 VirtualBox Resolution Guest Additions
1
How do I adjust the screen resolution for my Debian 8.1 64-bit VirtualBox machine?
7
Bad resolution on second monitor Fedora 24
0
How can I change the resolution of the login screen?