I have installed Debian Server on one of my servers and plugged in a extern hard drive to it through USB (sdb1, 2, and 5 on the image below) where I have all my files on right now. Before I used this WD Red hard drive (that are in a cabinet right now) in a NAS from Synology and I have not formatted it and I don't want that either. Now I want to manage these files through FileZilla over SSH.

I can't boot into Synology's operating system on my server because of unknown reasons. Therefore I installed Debian Server. I know that I can install Xpenology on a USB drive and boot it from there but I don't know how so Debian is the first choice at this moment. FreeNAS is no go since it requires 8 GB in RAM. My server only have 1 GB or 1,5 GB in RAM.

How can I access my files through FileZilla over SSH? Where can I find the location of the files on the extern hard drive and so on? Is mount the correct command for this? How can I use it? 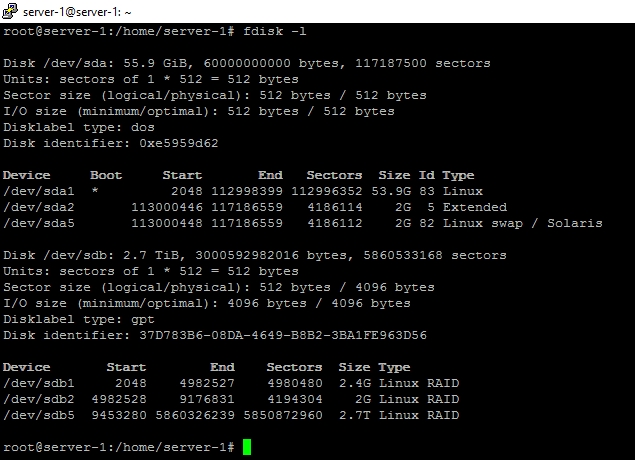 fdisk is telling you that the external disk is split into three partitions, all of them apparently RAID volumes. I write “apparently” because the type indicated on the partition is only a convention, Linux doesn't actually care. It's a bit strange to have a single disk with RAID volumes. To see what's in those volumes, run

Another useful command to see a summary of available storage volumes is lsblk.

Then, to mount it, use the mount command on an existing directory.

(Picking the same name for the directory under /media and for the device under /dev is just a convention.)

These complications are only necessary if the partitions do not directly contain filesystems. To mount a filesystem on a partition, you only need the mount command and an existing directory. With RAID and LVM volumes, everything is normally done automatically at boot time, but this doesn't take care of removable drives.

If the partitions contain filesystems, usbmount sets things up so that they're mounted automatically when the USB drive is inserted. I don't think it can handle RAID or LVM volumes however.

You may also be interested in pmount which allows mounting USB drives manually by non-root users.

Don't forget to unmount everything before unplugging the drive, otherwise data corruption is likely.

Not the answer you're looking for? Browse other questions tagged debian ssh files mount filezilla or ask your own question.

0
Can't mount external USB driver - on Ubuntu 12.04
0
I SSH into a linux server via putty, and i have a linked drive on my windows machine. How can I access files on other drives?
1
Removing hard drive mounted to /home
3
Installing Debian on secondary hard drive [from Windows]
3
Debian 9 does not boot after installing on USB drive with UEFI
15
Passing multiple files through stdin (over ssh)
1
How to access Synology nas available hard disk space through ssh?
0
How do I boot Debian from an EFI file