What are all the items on the cover of the "Linux Administration Handbook"?

As I mentioned in What do all the pictures on the front of the "Unix and Linux System Administration Handbook" represent? I'm fairly new to Linux and Unix.

@jasonwryan provided an excellent link to a blog that describes all of the items on the front of the first book, but is there an explanation available for all the items on the cover of the the "Linux Administration Handbook"? I didn't see any other entries on Lisa Hanley's blog. 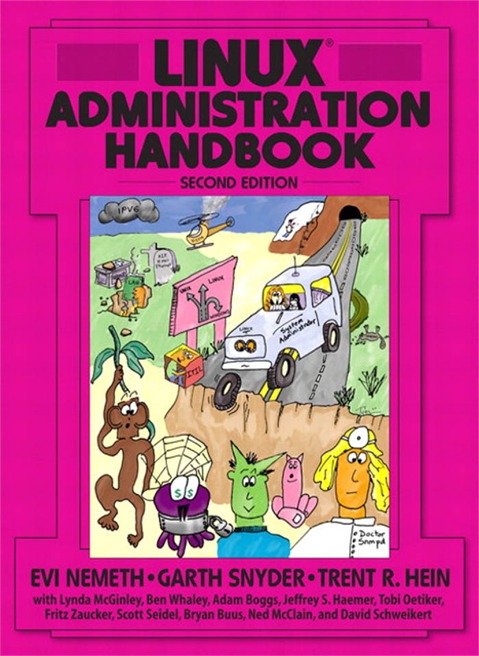 I'll bite on the first three, front row and center.

1) Web Spider (probably a rogue one that doesn't respect robots.txt, got caught stealing server resources and so has been locked out)

3) Finger Daemon (an early rudimentary identification server that allowed you to query it to find out about people on the system) Giving "The Universal American Symbol of Defiance" as its usefulness degraded over time and people started abusing it. Finger Daemon also demonstrates that computers operate on a digital binary system. Clenched fist = 0, Middle finger erect = 1. Just remember that the next time your system is giving you the Digital One. If it was British, a trinary system would be required to offer the same response.

Not the answer you're looking for? Browse other questions tagged linux history books or ask your own question.

15
What do all the pictures on the front of the "Unix and Linux System Administration Handbook" represent?

24
What are the main differences between BSD- and linux-based operating systems?
11
Linux Bulk/Remote Administration
6
What are the origins of rgb.txt?
1
What are the oldest irc clients I can still use on linux ?