This is my first ever question, I have put this question in front of Red Hat Instructors but didn't find any satisfying answers.

Almost all of the blogs, documentation etc. successfully explain the steps involved and the whole process but fail unanimously at as what actually takes place when loading grub stage2.

Here is my understanding of the process and have done a bit of testing as well;

I have dumped all the data from the 1st MB of the disk and can confirm that there is nothing except MBR. I get confused as to how 446 byte GRUB stage1 can load stage2 from a file system? According to some images on wikipedia and a few documents, when GRUB is installed, stage1 contains a LBA48 pointed to stage2.

Playing on the fact, I tried to test if systems boots when stage2 in removed or renamed from /boot/grub/ directory. The systems was still bootable even when there was no stage2 in the filesystem.

Will really appreciate if anyone can explain it.

GRUB loads itself into memory in the following stages:

It seems rather obvious stage 2 is the actual grub binary. In fact, the documentation states grub 2 is loaded by name.

I would try to do: 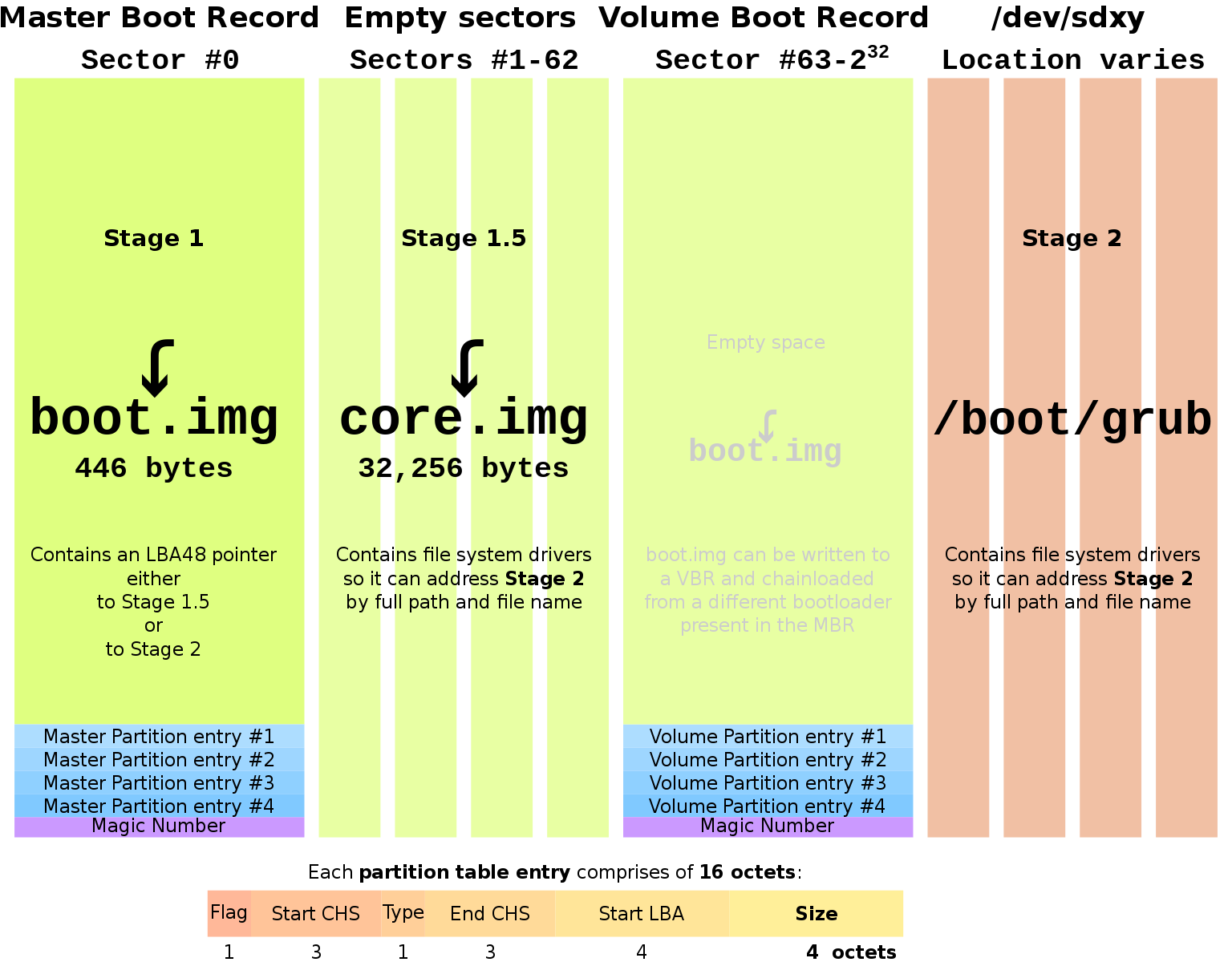 In computers that conform to the IBM PC boot BIOS sequence:

The code used by IBM PC to boot could be seen here:
First version of MBR from IBM® Personal Computer™ DOS 2.00

That code has many versions that are also presented in the starman's pages.
An start point about those many versions could be this page:
from MS-DOS 3.30 through MS-Windows™ 95 (A)

Most of that code versions used to just load the next VBR (Volume Boot Record). The VBR of the partition marked as boot-able in the partition table and then transfer execution to it.
(Please Understand that the VBR is not the absolute disk sector 0 or W7 MBR)

Search for this assembler note at the W7 MBR page:

It is interesting to read this from the W7VBR page:

; The following code uses INT 13, Function 42h ("Extended Disk Read") to read ; 1 sector at a time of the remaining 15 sectors of the Boot Record Area into ; Memory; starting at location 7E00.

As you can confirm, the boot code started at the MBR (disk sector 0), loaded the VBR (Volume Boot record) and many (15 in W7) following sectors.

But we are talking about GRUB here, so, go to the GRUB page:

And search for this code:

What that means is that BIOS load absolute sector 0 (MBR), GRUB code installed in the MBR keeps reading following sectors. Up to the size of core.img (GRUB2) in recent distros (about 60 sectors, or ~30 kB). Present day drives leave a full Mega-byte free after the MBR, so there is no problem. EFI disks have a separate partition for all this code and there is even less problem (for size, that is).

Legacy GRUB write stage2, or optionally stage 1.5 in some corner cases, to the MBR and several/many of the following 62 sectors.

And that is also explained in images in the Wikipedia Grub page.

NOTE: The stage2 might be written to other Physical disk. From the GRUB page:

GRUB Legacy can be installed in several ways: with or without Stage 1.5.

When installed with Stage 1.5, the pointer in the MBR points to the beginning of Stage 1.5. The MBR code loads the first block of Stage 1.5; the code in that block includes a list of further blocks to load, and a BIOS partition number and a filename specifying where to find Stage 2.

But in the OP's case, GRUB Legacy has been installed without Stage 1.5, as indicated by the text Loading stage2 in the second hex dump. In this case, MBR loads the first block of Stage 2 directly, and like in the case of Stage 1.5, the first block will have a list of further blocks to load embedded in it.

When installed with Stage 1.5, the Stage 2 of GRUB Legacy can be treated like a regular file, since it is loaded by filename, not by absolute block numbers. But when installed without Stage 1.5, Stage 2 may not be moved on disk from whatever block location it was placed by the installer. Filesystem-type-specific actions should be performed to make sure that the file won't be accidentally moved: for example, on a VFAT filesystem, the Stage 2 file should be marked with the "system" and "read-only" attributes.

Of course, the installer can embed Stage 2 between the MBR and the beginning of the first partition if it fits in the available space, in which case protection from in-filesystem manipulations will not be an issue.

Here's the tail end of the OP's second hex dump:

It contains the specification of further blocks to load, as a number of 8-byte block list structures. In this case there is just one of them: "load 0x00f6 blocks starting from block# 0x000849fd to 16-bit segment address 0x0820". Note that the block number is only 32-bit, not a full LBA48 block number: this restricts GRUB Legacy from accessing the full capacity of large disks.

This is entirely correct.

Technically, "at any location that is addressable by a 32-bit LBA block number", but otherwise correct. The "under 1024 cylinders" would come into play if the BIOS had no support for LBA access, and GRUB had to fall back to old C/H/S style BIOS calls... but in any post-Y2K hardware, this should not be an issue.

Some documentation I have consulted mentions that stage1.5 is located right after MBR before sector 63,

If stage1.5 is used, this is where it usually ends up. It does not have to be there, though. The "before sector 63" comes from the old DOS convention for the location of the beginning of the first partition, as I stated above.

It actually can be anywhere that is addressable by a 32-bit block number, but again, the first 1 MB is where it usually is, when Stage 1.5 is used at all. The "first 1 MB" comes from the modern SSD/SAN-friendly convention of setting the beginning of the partition at exactly 1 MiB from the beginning of the disk, which is a nice big even power-of-2 so it will be aligned nicely with larger block sizes, RAID stripe sizes and/or whatever other alignment preferences the storage hardware might have.

and yet another group claimed that stage1.5 is just a GRUB v2 thing and does not apply on GRUB legacy.

This documentation gets it exactly backwards: stage1.5 is specifically GRUB Legacy thing only.

A bit of simplification, but essentially correct.

In RHEL/CentOS 6, the very first userspace process initially runs /init within the initial ramdisk file, which is actually a script, whose last action is to run exec switch_root <mountpoint_of_real_root_filesystem> /sbin/init <arguments> or similar.

In RHEL/CentOS 7, the /init is actually a link to /usr/lib/systemd/systemd within the initramfs, which will start a special version of systemd that recognizes some systemd-specific parameters with a rd. prefix. Like the /init script in older versions, it sets up whatever is needed to access the root filesystem, then exec()s the "full" version of systemd on the real root filesystem.

What I did is configure and install Hiren's boot cd to load on a usb flash drive with the automated grub loader from hiren.info once I had the bootable Hiren's usb drive I resized the primary partition on the hdd reducing one gb form the back end of the flash drive. Then I created an ext4 partition in the unallocated space. Next all I did is run grub2config command in xterm on RIPLinuX and the installation was relatively automated. The wizard allows you to select the partition and directory that grub2 is installed in. I set the loader to the mbr on the primary partition of the flash drive and the ext4 /boot/grub as the installation directory for the grub2 files. 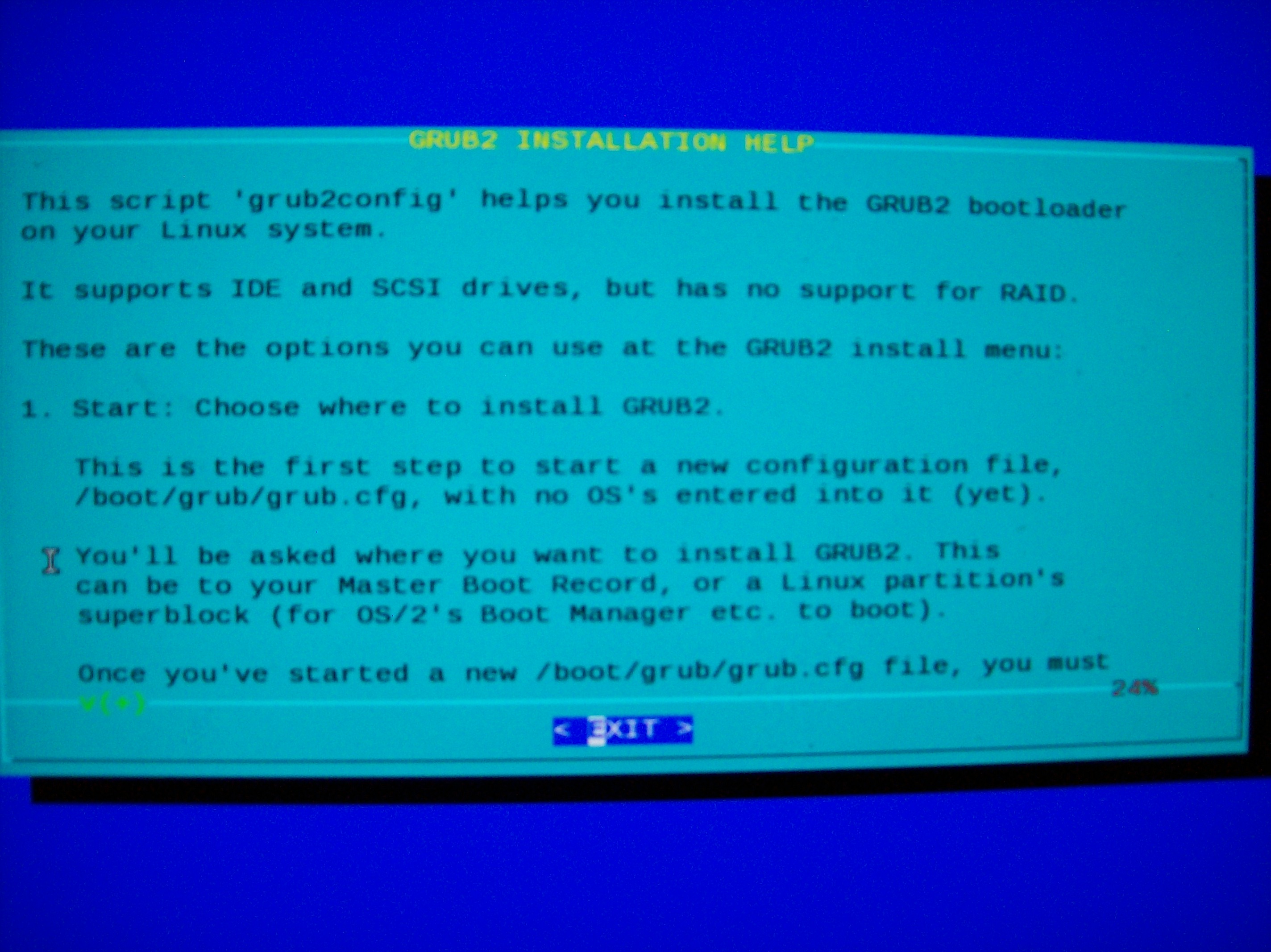 What happens is the grub2 grldr replaces the previous grldr in the root directory of the primary partition on the flash drive. The previous menu.lst file will likely be backed up before replacement with the new menu.lst file with the boot options you selected in the automated wizard. Once you complete the 4 or 5 step process (depending on your configuration preference) simply reboot the system selecting the usb disk as your boot device and when the grub2 menu.lst loads with your boot options just type the letter "c" to enter the grub2 command interface. Now you can fully load and boot to portable grub2 environment. 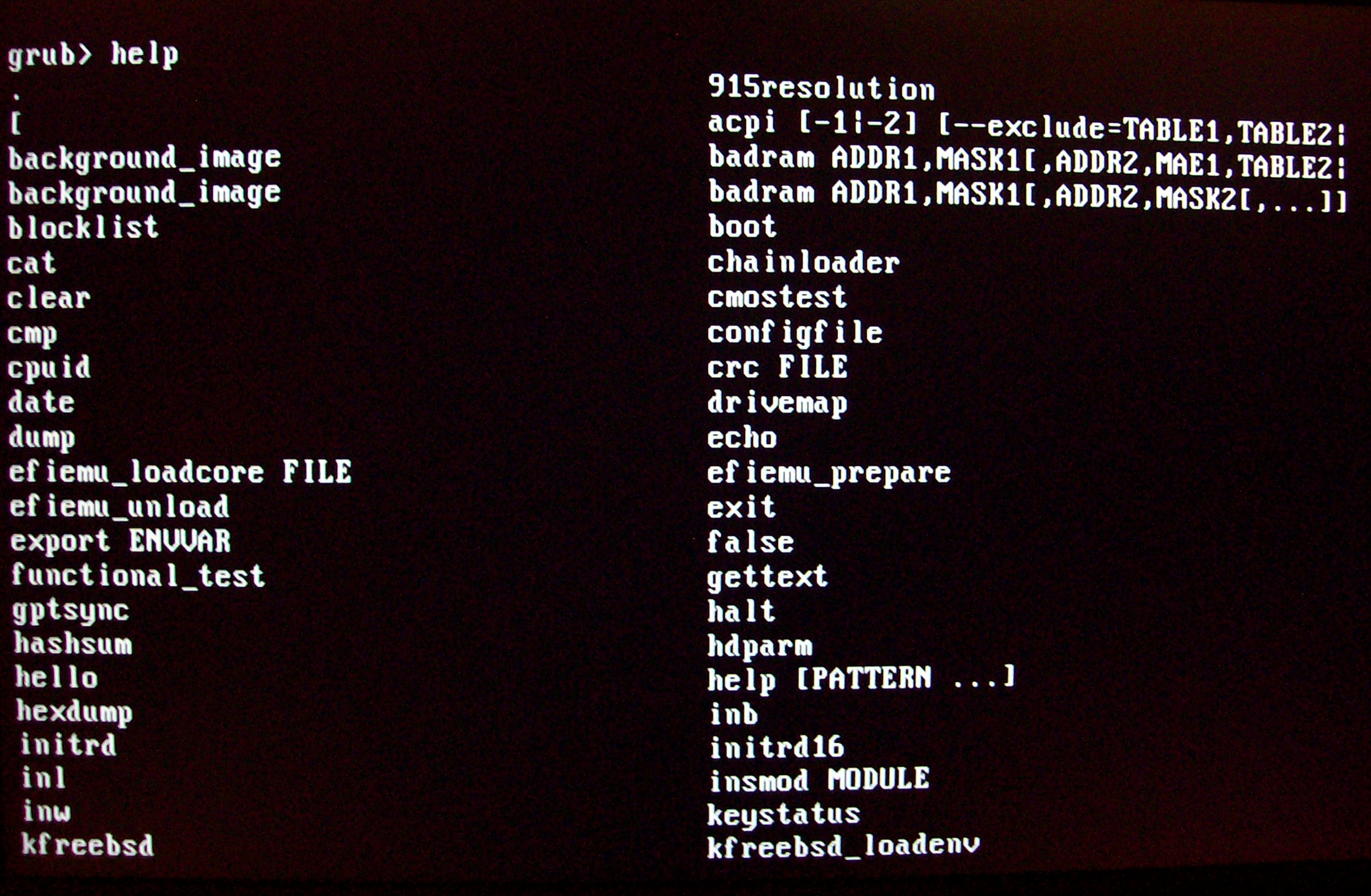 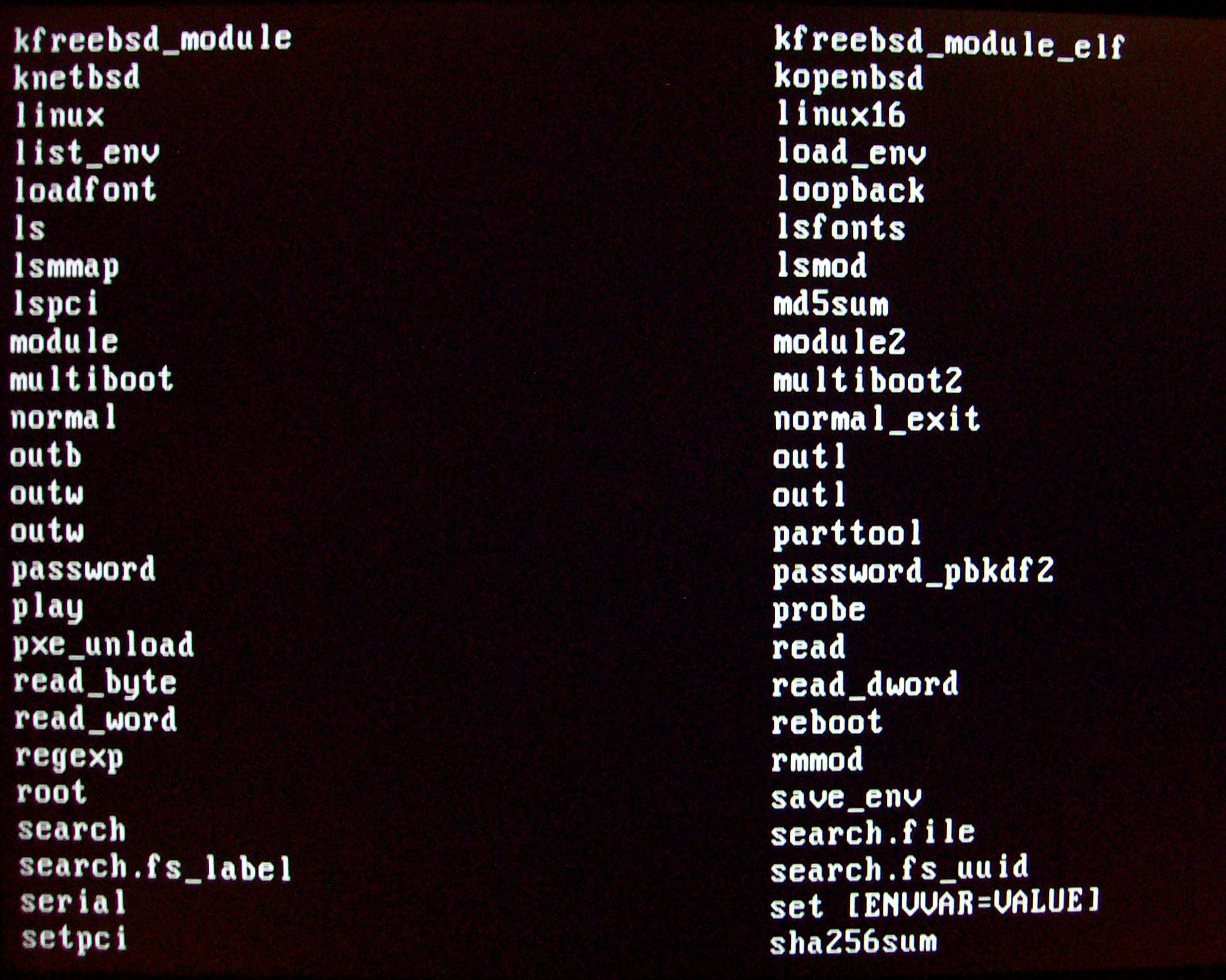 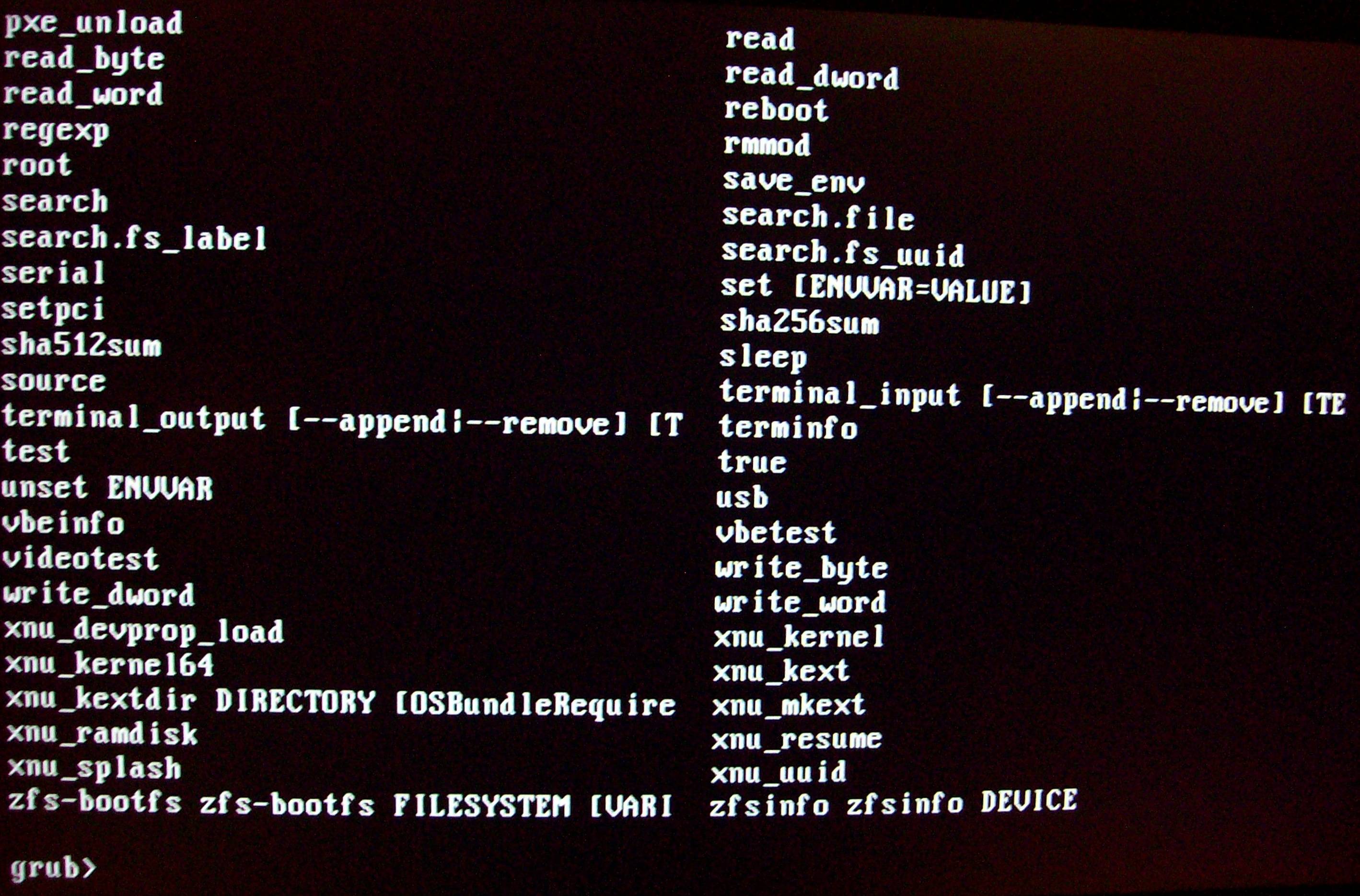 There are many ways in which grub could boot a system. It depends on:

Limiting the discussion to an MBR boot sector (msdos partition) and an ext{2,3,4} filesystem on /dev/sda1 (you have no separate /boot partition or, if you have, you have not given the detail of the LVM structure for such partition).

Even in this limited scenario there are still (at least) some ways in which grub could be installed:

But this are just possibilities, in your case, the Magic word points to the middle of partition /dev/sda1 (at absolute sector (dec) 543.228 echo $((0x000849fc))). You have given the first sector at that position. What you are missing is to detect which file is using that sector:

Not the answer you're looking for? Browse other questions tagged linux boot grub or ask your own question.

1
How does Grub Stage1, exactly, access/load stage 2?
8
Kexec to GRUB (or to Syslinux, or Windows)
0
Do I need to re-install grub to MBR after changing boot partition