What is the difference between Docker, LXD, and LXC [closed]

What is the difference between Docker, LXD, and LXC. Do they offer the same services or different.

No, LXC, Docker, and LXD, are not quite the same. In short:

This image can help you to understand the main difference between them: 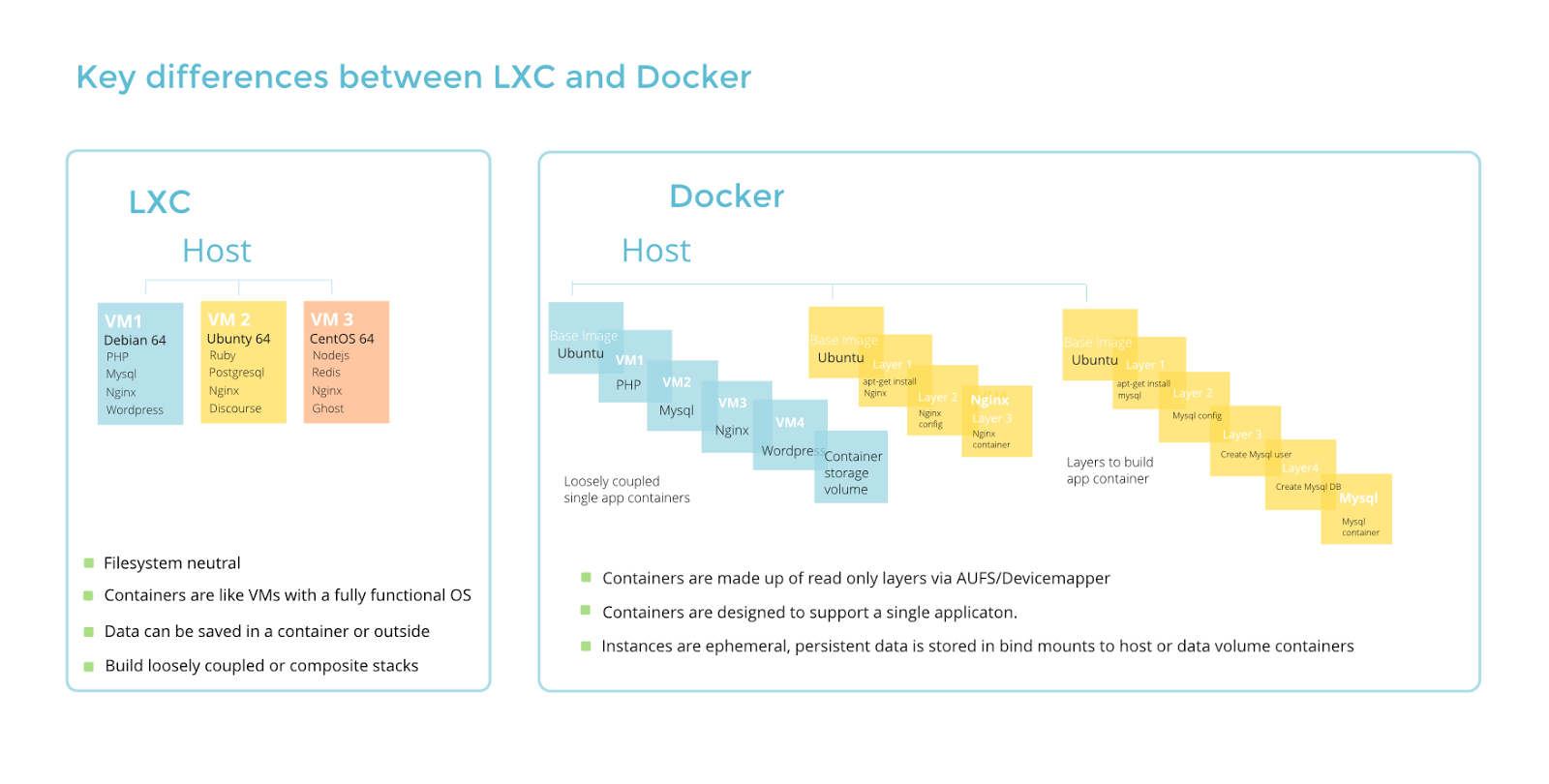 What all of them have in common, is that all these 3 technologies are related to containers.

Containers are a lightweight virtualization mechanism that does not require you to set up a virtual machine on an emulation of physical hardware. In Linux, what they have in common are the Kernel features used: cgroups, namespaces(ipc, network, user, pid, mount). They also try to create more safe environments by creating unprivileged containers and integrating with security features like selinux. These technologies export APIs to better integrate with other softwares.

These two integrates the same family where:

Canonical is the main sponsor here, and Oracle is also investing man hours on this technology.

It has some differences, being the biggest of them the Engine that wraps-up Applications with a self-contained filesystem instead of a base "Userspace image". The idea is to contain the app and base image to create the impression that the App is a single process inside the engine. Docker used lxc technology as underlying to communicate with the kernel, but today, it uses its own library, libcontainer.

The filesystem is an abstraction to Docker, while lxc uses filesystem features directly. Network is also an abstraction while with lxc you can set up ip addresses and routing configurations more easily. Some "App Store like" sites are being maintained by Microsoft, Amazon, Vmware, IBM and other players.

Docker. INC. is the main sponsor here. Vmware is also investing in this technology.

These are other container technologies that Linux have: OpenVZ and Linux-VServer

Not the answer you're looking for? Browse other questions tagged lxc docker lxd or ask your own question.

11
AppArmor profiles in Docker/LXC
1
What is the network connection speed between two containers communicating via a virtual bridge running on the same host?
4
ZFS pool for both common use and LXD, will it work?
1
Creating a custom template, based on some existing LXC template after running the instance at least once
0
LXD Container/What's the Preferred Way of Accessing Files from Host
0
How to run docker inside an lxc container?
1
disk quota exceeded when trying to deploy Docker container inside LXC
2
LXC, Docker and iptables on the same host, timeout on port-forwarding from the container to the container