How do I ask password by GUI prompt while using sudo in script?

I use Trisquel GNU/Linux with GNOME Flashback Desktop Environment. I need a GUI password prompt for user for executing command with sudo in script. Example consider following script:

Which is to be executed following way (Run) i.e not inside terminal:

So, It is needed to ask for password in order to run command with sudo otherwise it fails to do a job.

Therefore, How do I ask password by GUI prompt?

You can ask password by means of GUI prompt with the help of -A, --askpass options for sudo.

From the sudo manpage:

So, you can graphical helper program such as ssh-askpass which prompts a user for a pass-phrase using GNOME:

So, Add the following line to /etc/sudo.conf: 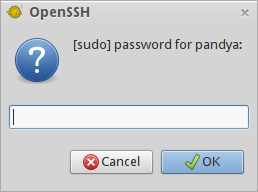 You can also user other program like zenity for that. Example I use following:

Where zenity_passphrase is a custom script set to be used directly as command: 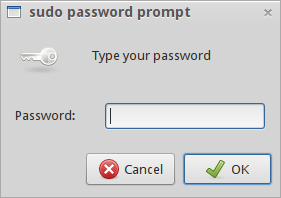 Not the answer you're looking for? Browse other questions tagged shell-script sudo password prompt gui or ask your own question.

10
using sudo on GUI applications
63
Prompt for sudo password and programmatically elevate privilege in bash script?
2
Software installation with GUI package installer using sudo permission
9
Graphically ask for password in a bash script and retain default sudo timeout setting
6
sudo askpass: ask from other tty
4
Changing user password through GUI app
9
What is the correct way to abort an operation from the sudo password prompt?
1
ask password inputed for sudo install command
1
su or sudo - how to know which one will work?