In Ubuntu/gnome-terminal, if I run:

Then launch the GHC interactive environment (a Haskell console):

Then pressing Return does not submit the line; however, Enter does.

Both Return and Enter submit the line.

I don't really understand the behaviour; surely Return will be submitting the newline character in both cases?

The first step in understanding what's going on is to be aware that there are in fact two “newline” characters. There's carriage return (CR, Ctrl+M) and line feed (LF, Ctrl+J). On a teletype, CR moves the printer head to the beginning of the line while LF moves the paper down by one line. For user input, there's only one relevant concept, which is “the user has finished entering a line”, but unfortunately there's been some divergence: Unix systems, as well as the very popular C language, use line feed to represent line breaks; but terminals send a carriage return when the user presses the Return or Enter key.

By default, ghci, or rather the haskeline library that it uses, has a key binding for Ctrl+J, i.e. LF, to stop accumulating input and start processing it. It has no binding for Ctrl+M i.e. CR. So if the terminal isn't converting CR to LF, ghci doesn't know what to do with that character.

Referring to both Return and Enter sounds as if you are describing the keys respectively on the main part of the keyboard and on the numeric keypad often on the right-side of the main part: 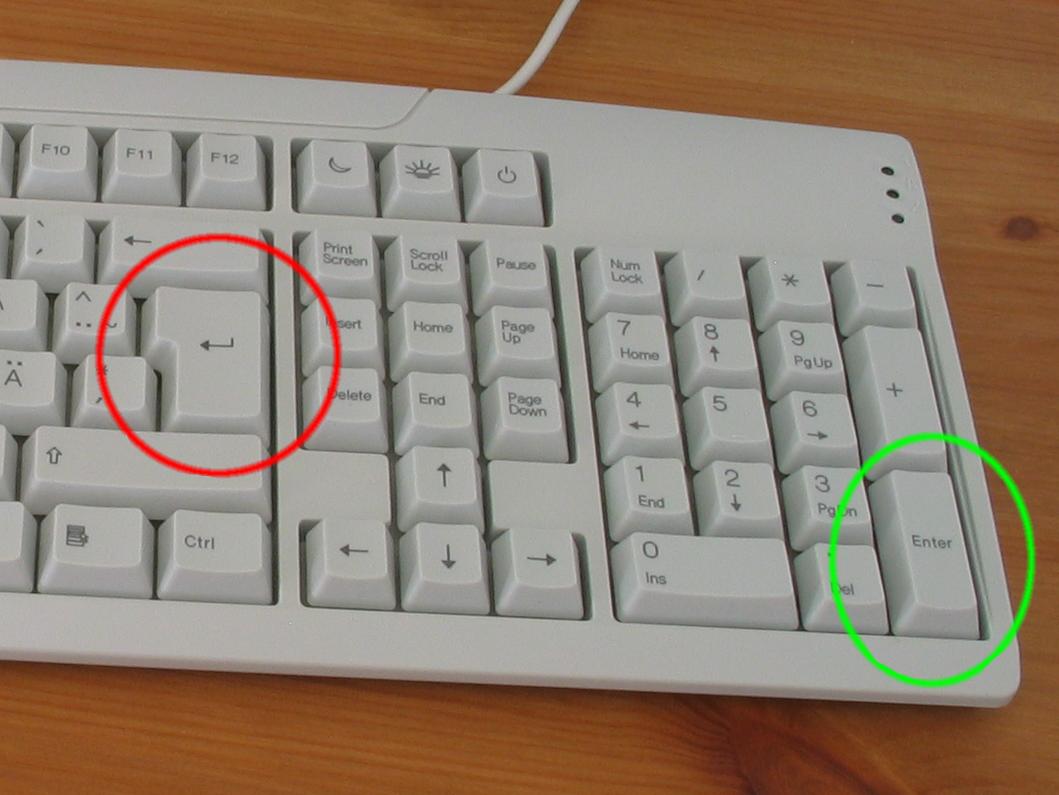 However, only the first of those corresponds to the key which (unmodified) sends controlM. The key on the numeric keypad may send a carriage return or whatever, but may actually send an escape sequence, e.g., escapeOM, for VT100-like terminals.

You can see the different key values by echoing them, e.g., using cat -v.

Not the answer you're looking for? Browse other questions tagged terminal stty or ask your own question.

4
Why in the output of script (1) the newline is CR + LF (dos-style)?
4
Enter key is different from Carriage Return (CR)
4
shell read incorrectly processes enter keypress

0
What speed should zsh connect to tmux at?
3
Monitor and alert user when stty settings change?
3
How can I type a command to execute when the current command completes?
9
Command wraps around same line after 80 characters
2
What does the “opost” stty flag do?
1
Ctrl-Enter for Midnight Commander not working in X terminals in Fedora, working in OpenSuse
2
How can I revert the effect of “stty cols N”?
0
How to emit EOF to a file descriptor (while keeping it open)?