I was installing Debian Wheezy the other day and during the installation I was prompted that a firmware bnx2-mips-09.6.2.1a.fw is missing and I should insert an USB stick with the package so that Debian could install it.

There was an alert with text like "Missing firmware, please insert removable media with the .fw file to install it". I plugged in my USB stick with that file, it was formatted beforehand. I clicked "OK", the message box disappeared for a while (like 10 seconds, the diode on the USB stick was flashing) and then appeared back up.

So I moved on without that package installed.

Then I was asked to provide IP, Mask, Gate and DNS. I did, but it just showed an error. I repeated the process several times, including starting the OS installation all over again, but nothing worked.

I moved on with the installation, was asked to choose an archive mirror, but because there was no internet connection, it couldn't access any.

Finally I managed to install the system, but there was something wrong with it, because it didn't even recognize sudo command.

What I did was: 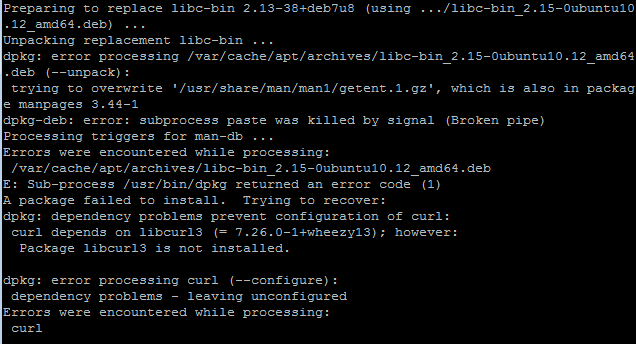 I tried to install curl by sudo dpkg -i --force-overwrite path-to-the-deb-file but it doesn't work either:

I have no further idea how to fix my problem. Any thoughts?

As @plugwash suggested, I added ubuntu mirrors to a Debian system. Fixing the /etc/apt/sources.list by adding Debian mirrors solved my problem.

I edited /etc/apt/sources.list and added mirrors,

What lines did you add specifically? From your apt output it looks like you have added a Ubuntu mirror and that is why things are breaking.

Given this is a new install, I would recommend starting again, and next time don't go adding Ubuntu mirrors to a Debian system.