For making documentation/tutorial videos, I need to highlight the mouse, for example with a yellow translucent corona around it: 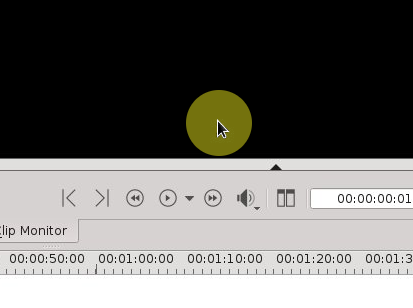 The marker should be active when clicking and moving, but if it's on all the time, that's just as fine.

Compiz seems like a thing of the past, find-cursor isn't tied to any actions (clicks/movements) and blocks interaction (while it's drawing, you can't click "through" it) and key-mon doesn't draw correctly, disables interaction as well and is generally buggy when it comes to the mouse highlighter, at least with a tiling window manager.

Edit 2021-05-04: I believe the recently added solution by @johannes-titz (highlight-pointer) is superior as it doesn't use a cursor theme. I'll leave the rest of my post as is, since it may still be usefull to someone.

While the DMZ-Highlight theme suggested above works for the basic arrow pointer, non of the other cursors are highlighted.

Frustrated by this I wrote a short program that applies a similar highlight to all cursors for a given theme.

For those who don't want to compile and run it I've also included the results of running the program against the DMZ-White cursors, creating so to say an updated version of the DMZ-Highlight theme where all cursors are highlighted

Use a custom mouse theme that follows the XDG specification.

This could be the easiest way to introduce the marker. I suppose this just adds a translucent circle layer to the cursor or simpler. Even better, this approach will most likely applicable for both X11 and Wayland cursor themes, as noted in this ArchWiki.

How to create mouse theme

Do we have to create the custom mouse theme? Yes, if the user prefers to create one by own. This could be time consuming and most users will need to do some readings.

The most recent discussion on "creating icon themes" is circa 2015, which is found in this thread on Linux.org. It covers little bit on cursors and generously provides more links for further reading.

Several older tutorials circa 2010 mentioned this GIMP plug-in for creating X11 mouse cursor (XMC). Another approach is using Xcursorgen program, which is explained in this article on ehow.com.

Or without creating theme

Then again, do we need to create one? No, because some users already created such themes. Most users will just have to search, download and install it.

I found that DMZ-Highlight by MBOSSG is a simple and elegant solution.

It is a custom mouse theme for Ubuntu/Linux that has translucent yellow circle below the cursor, which is almost exactly what the question had described. As the name hints, DMZ-Highlight (left) is based on DMZ white variant from DMZ cursor themes.

^1: visible all the time for most UI elements, except text input will show the usual I cursor 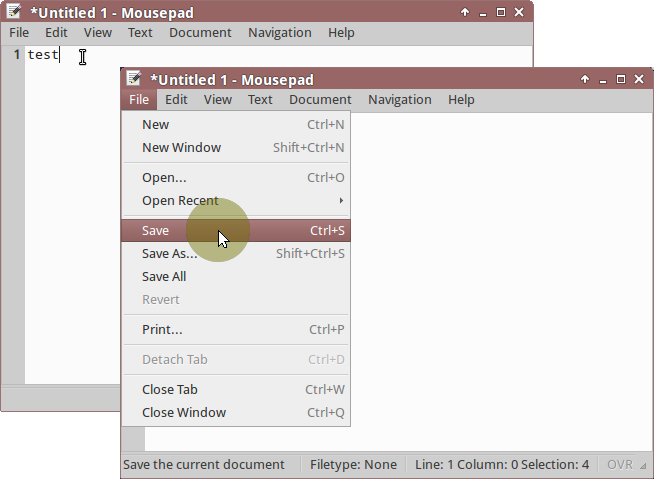 ^2: the mouse theme neither obstructs nor takes focus away from windows, just the usual cursor with a highlight under it 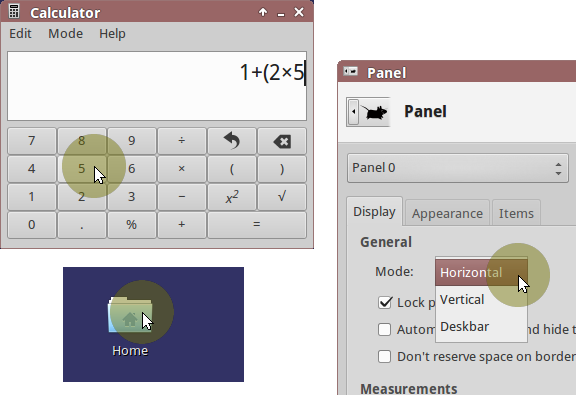 Disclaimer: This answer is intended to suggest the easiest way to introduce the marker on cursor. As such, this answer shall not explain on "how to install mouse theme" (This should be covered by a separate question and answer).

The author of DMZ-Highlight had provided install and uninstall scripts, which are convenient for Ubuntu users. In my case, the cursor was manually installed and configured via sudo update-alternative commands, as I prefer this way.

TL;DR Install a custom mouse theme, which will highlight the cursor. Zero scripts, works all the time.

For me none of the solution were satisfactory. One reason is that I want to use vlc screen cast and on GNU/Linux it does not show the mouse pointer at all. What works very well for me is: highlight-pointer

After looking for the same functionality (because of some VNC-like software that doesn't show the cursor), I used the solution from the answer https://unix.stackexchange.com/a/228674 and added the functionality (https://github.com/arp242/find-cursor/pull/15).

You have Arch and an uncommon wm so you probably knew you had to do some hacking on your own.

reposting here, this comes from the link above, if it works don't forget to thank the user mikeserv too, as I'm mostly a messenger here.

The following will probably work for you:

It depends on the three utilities xv, xwd, and xdotool. The first two are very common X utilities, and the third I'm reasonably sure you already have.

After sleeping one second, xdotool writes the mouse's current coordinates to its stdout in an eval-friendly -shell format like:

eval sets the shell variables accordingly, and the for loop subtracts half of the soon-to-be-displayed image's size from each of $X and $Y's values or, if either value is less than 25, sets them to 0.

xwd dumps the root window over a pipe to xv, which crops around the mouse location to an image size of 50x50 and displays a negative of the image under the current mouse cursor in a little window sans any window manager decorations. 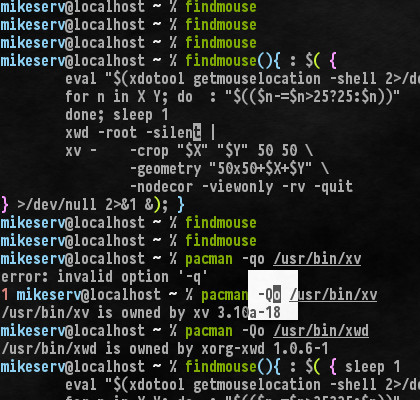 ...though I guess my mouse cursor doesn't show-up in screen shots. Rest assured, though, it was right over the white box there when I took the picture.

You can see in the image how I also wrote it as a shell function and backgrounded it. It is mainly for that reason there is a sleep in there at all - pressing the RETURN key will scroll the terminal if you're already at the bottom, and xwd was fast enough to grab its picture of the screen before the terminal scrolled - which would offset my negative in the image a little and I didn't like it.

Anyway, because xv is run with both the -viewonly and -quit switches, it will disappear as soon as a mouse-button is clicked or a keyboard key is pressed - but will remain until you do either.

Undoubtedly you could do much more elaborate things with ImageMagick or even xv alone as well - but I just did a little negative box under the mouse cursor. You can find the xv docs here and the docs for xwd in man xwd.

Not the answer you're looking for? Browse other questions tagged mouse cursor screencasting or ask your own question.

4
Looking for "Camera Mouse" for Linux
11
Can I simulate mouse movements via terminal without xdotool?
24
Highlight current mouse position
2
Script for swapping mouse primary and secondary buttons
3
How do I change the mouse cursor icon for the Sway Wayland compositor?
3
How to set absolute mouse cursor position in Wayland without using mouse?
1
Managed to uninstall package for keyboard and mouse input. (libinput?)
5
How to map mouse keys as keyboard keys without losing'numeric keypad' for Linux?
5
Arch Linux KDE: How do I get the mouse pointer / cursor to highlight?
1
Configuring evdev conf for middle mouse button emulation