systemd: running a script on shutdown after filesystems are mounted read-only

Is there a way to run a script on shutdown, after the file system is remounted as read-only?

I've a raspberry pi connected to a wireless socket, which I can control via a sender and a script. I want to power off that socket (powering off the raspberry) on shutdown, after the file system is mounted read-only.

The script /test does output the current mounts. When it's run on shutdown, it states read/write for the root file system and not read-only as expected. 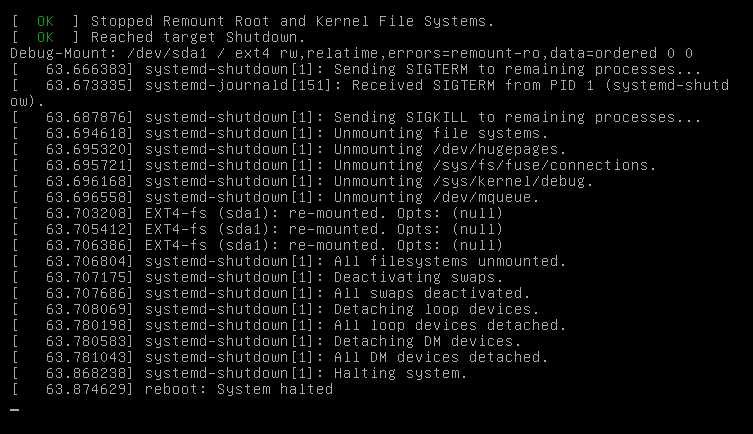 I found a reliable solution: Just put the script in /usr/lib/systemd/system-shutdown/.

Immediately before executing the actual system halt/poweroff/reboot/kexec systemd-shutdown will run all executables in /usr/lib/systemd/system-shutdown/ and pass one arguments to them: either "halt", "poweroff", "reboot" or "kexec", depending on the chosen action. All executables in this directory are executed in parallel, and execution of the action is not continued before all executables finished.

Regarding your original script, it's usually ran before halt.target (note you didn't order it before halt.target) - and filesystems are never remounted ro at that point. systemd-shutdown (to which systemd execs at the very end - after reaching halt.target), kills stuff (possibly along with your not-ordered script =) ), runs final umount/swapoff/losetup, remounts ro what couldn't be umounted, then runs in parallel stuff from system-shutdown directory, then tries to pivot_root() into /run/initrams if shutdown exists there (and if it doesn't or pivot fails, proceeds with halt).

Not the answer you're looking for? Browse other questions tagged systemd shutdown init-script readonly unmounting or ask your own question.

6
How to execute scripts in /usr/lib/systemd/system-shutdown/ at reboot or shutdown?

6
System does not poweroff - how to diagnose
1
Running a script with systemd on shutdown or reboot
1
Missing service file for pure-ftpd
2
LVM volume on USB drive fails: Read-only file system
4
Why is systemd stopping service immediately after it is started?
1
systemd: finish the execution of custom shell script before starting nginx
1
Custom systemd service fails with result 'signal' status=1/HUP
1
systemd service on shutdown with disk access [backup]