Warning while Booting into Ubuntu

Recently, I installed Kali Linux 2.0 as a third OS on my Dell Latitude E7240.

I used Unetbootin to make a bootable USB of Kali Linux. When I booted from it, it gave me options I wasn't used to. I chose Default the first time, and I was met with a black screen, so I manually shut my computer off, rebooted, and then chose Live Encrypted USB Persistence.

After a while of outputting stuff while booting which I did not understand at all, I finally got into a live session of Kali Linux 2.0. From there, I searched in the applications and found Install Kali, which I clicked.

I was given a graphical interface which removed the dash and bar at the top, and only showed me the installer, which was partially cut off. So, for I believe two things (one of which was configuring the network), I could not see any options, and blindly hit enter. However, I'm fairly certain nothing went wrong here, as the installation carried through smoothly and asked me mostly what I would expect to be asked while installing.

However, since I already have Ubuntu, the first time, I selected no for installing Grub, then it said I had to make my OS bootable and so I had to install something somewhere, so I just chose my hard drive, /dev/sda, rather than entering the device manually, which I don't have any experience with. I finished the installation successfully, then rebooted.

My Ubuntu Grub loaded, but I didn't see Kali Linux. I tried following tutorials to add it to Grub, but had no luck. So, I reinstalled Kali, this time choosing to install Grub. Then I rebooted, and the Kali Grub showed up. However, now I get warnings when booting into Kali (Using Kali Linux) and when booting into Ubuntu.

This post is about booting into Ubuntu. When I boot into Ubuntu, I get the warnings shown in the following image:

EDIT2: New Image with more of the warnings (the warnings that flash for less than a second). 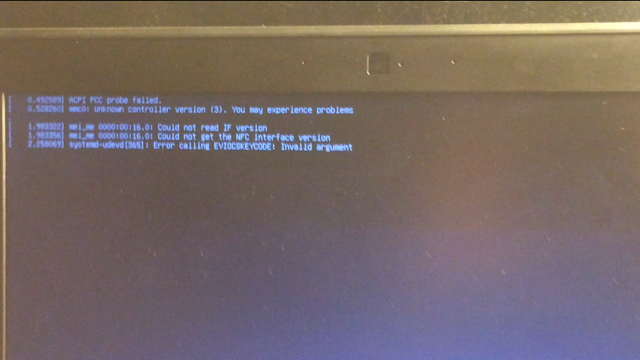 I don't think I have experienced any problems yet. However, just to be safe, I would like to know what this means. So what does that mean? If I am missing information, please tell me, and I will add it.

EDIT1: This all began AFTER I installed Kali Linux.

You need to run sudo update-grub2 from Ubuntu after installing Kali Linux. This will add any OS located in any partition, without this grub will not know that you have installed anything else in any partition.

Alright, so I do not hang on the console page while booting anymore, and therefore do not see the errors anymore. All I did was reinstall Grub from Ubuntu so that it would be used rather than Kali's Grub. Is it possible for anyone to tell me why?

I am not sure if the errors have disappeared, and that I'm just not seeing them. Is there any way I can actually solve this?

Not the answer you're looking for? Browse other questions tagged ubuntu boot kali-linux dual-boot boot-loader or ask your own question.