Recently (say within the last two months), some of my media keys have ceased to obey their assigned shortcut.

Take, for example, Play. If I assign AudioPlay as the keyboard binding in the Keyboard->Keyboard Shortcuts menu, nothing happens when I press the key (this at least suggests that the the key is still recognized).

Further, if I assign another shortcut (e.g., Ctrl-Alt-slash), this works as expected, which suggests it is still possible to assign a shortcut to the play function.

This seems to be related to this question over on AskUbuntu, but the accepted solution (mess around with gsettings) does not apply, as the suspected lack of XF86 is not true in my case (at least in gsettings).

It may be worth noting that there is a discrepancy along these lines in my Keyboard Shortcut interface--namely, the media keys that still work (e.g., Mute) list the XF86 prefix in the shortcut menu, while those that don't work, don't have this prefix in this menu.

I've exhausted all other avenues of exploration that came to mind, including the suggested cinnamon-desktop-migrate-mediakeys which came along with the 17.1 release (this problem started well after I upgraded to 17.1).

It is very possible that you have a Chrome extension hijacking those keys -- for example, Plex or Google Play.

To investigate, head over to chrome://extensions/, and check out the "Keyboard shortcuts" link at the bottom of the page -- investigate to see which keys may be prioritized by Chrome extensions, e.g.: 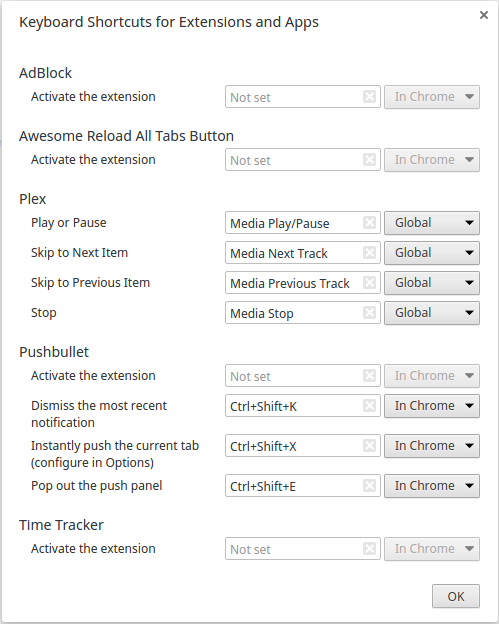 Here, it's clear to see that Plex has taken control of the Media Play/Pause, Media Next Track, Media Previous Track, and Media Stop buttons. Simply click the X next to each to un-set that shortcut entirely, or reset the scope to In Chrome if you'd still like those shortcuts to work while a Chrome window is activated. An alternative is to just turn off the extension itself.

Not the answer you're looking for? Browse other questions tagged linux-mint keyboard-shortcuts or ask your own question.