Why do I get permission denied when using mv although directory rights are correct?

I get permission denied when trying to move folder Music via mv although directory owner is set to my user and user permissions are set to 7. What's going on?

(I know that I could use sudo but I want to find out what's wrong. Something smells fishy here). Ps: I am on Mac OS X El Capitan. 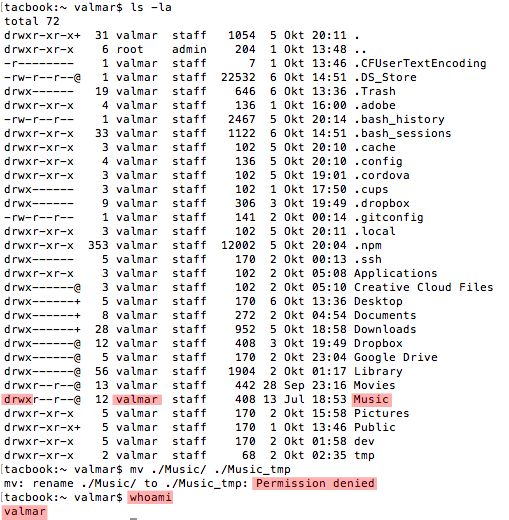 I was using Windows Subsystem for Linux. I had the directory open in a different bash instance. Closing it let me move the directory.

Do note that, when in folder a, moving b to c, the folder permissions of a determine what you can do.

In this case, the permissions on . will be most important.

Observe that the permissions are more complex than simply rwx. Your music folder has an @ at the end, the . folder has a + at the end.

Seems like as if there was at least 1 file somewhere deep in that directory that didn't have right permissions.

The problem here likely has to do with the Access Control List (ACL) of the Music folder. The ACL is a separate permission system to the regular POSIX ones that are normally listed by ls -l. Some other directories in the Home folder and elsewhere also have ACLs.

To see the ACLs within the home directory, use:

You will likely see a rule like 0: group:everyone deny delete for the Music directory. As you noted you could override the problem with sudo. If you don't want to do that (or can't), you have other options, given that you're the owner of the file. You can strip off the offending entry from the Music directory's ACL, based on its index (0 in the example I gave above):

Or you can strip off all entries in the ACL:

Now you can move the directory around (subject to the regular POSIX permissions). If you want to put the ACL back after the move, you could use:

And use /bin/ls -le again to confirm the ACL is as you want it. Check out the ACL examples in man chmod for more info. In particular, this intro is helpful:

Each file has one ACL, containing an ordered list of entries. Each entry refers to a user or group, and grants or denies a set of permissions. In cases where a user and a group exist with the same name, the user/group name can be prefixed with "user:" or "group:" in order to specify the type of name.

I don't think that man page explains the rules around ordering, but this page explains the order rules for ACLs clearly. In particular, an explicit deny rule will be applied before an explicit allow rule. So, as long as the group:everyone deny delete entry is in place, it's not possible to give your user permission to delete with an allow rule. This is because permission is denied to the everyone group, which includes you, and that rule will be applied first.

I had this problem when a set of programs was running in a directory I was trying to remove. In order to move the directory, I had to first kill all running programs from that directory.

The general procedure is:

That also can happen when one of the files inside is write-protected. I had the edge case today when access.log was write-protected to Apache, which was already stopped. I just removed this file, so further I was able to move parent directory.

Not the answer you're looking for? Browse other questions tagged files permissions osx directory mv or ask your own question.

445
Execute vs Read bit. How do directory permissions in Linux work?

10
Why is permission denied for npm start using node-dev?
2
Mounting Windows shares using cifs results in “Error:13(Permission denied)”
9
Why do I get “Permission Denied” errors even though I have group permission?
4
Why are execute permissions required to rename files in a directory?
3
Exit bash when find gets to a folder with permission denied
1
“Permission denied” even with uid/gid/umask set (NTFS)
1
How to Allow User Access to a Specific File in a Restricted Directory?
0
Why does the group need --x permission on the parent directory?