I have Windows 10 operating system on HP Pavilion laptop not very old. I have installed Linux Mint on another partition and both the operating systems work fine (I am able to use both of them).

My problem is: Whenever I turn on the laptop, I am directly taken to Windows 10 and not given an option for Linux Mint.

To boot into Linux Mint I have to each time press F9 to show boot options, and choose 'Ubuntu' after which I am shown the Linux Mint boot screen option (gives me option to boot into linux-mint compatibility and stuff) - and then choose Linux Mint 17.2 to boot in it.

After pressing F9, I get a menu -> Then I choose second option for Mint, the first is for Windows. (Can I change this priority order?) 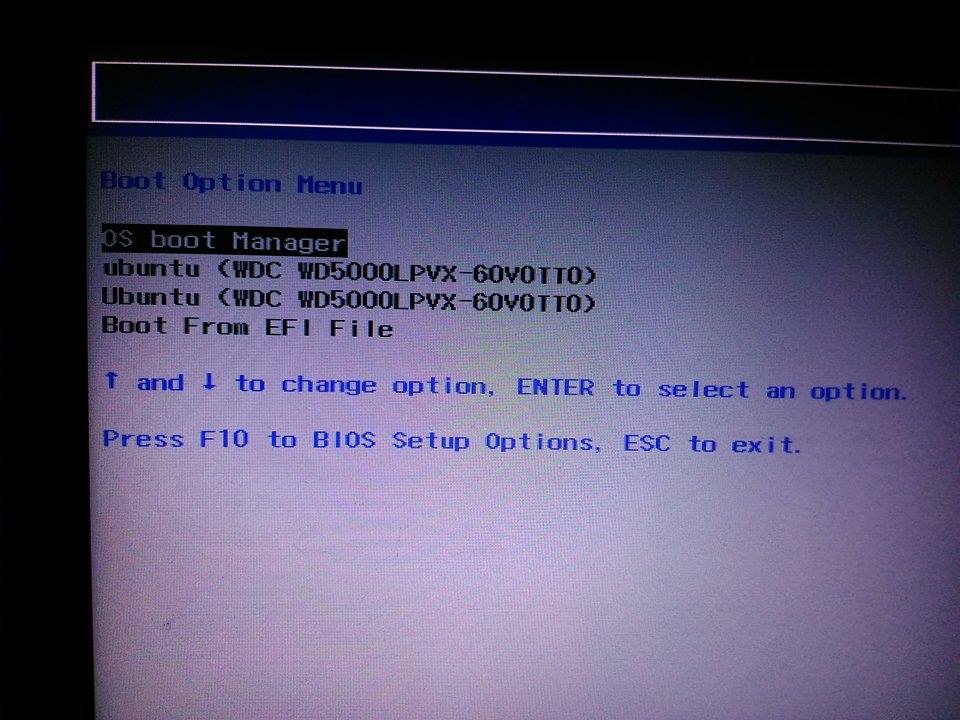 I have UEFI enabled (Legacy disabled) and Secure boot disabled. The boot priority is 'OS boot manager' and then USB, DISK etc. There is only OS boot manager, others are external device stuffs.

I have searched for my problem, but couldn't solve it. First I read about grub, this is my grub file I found at /etc/default/grub.

These are some of the

Then I tried live booting from pen drive and reinstalling grub from there by some commands, but it was giving me errors. (What I understood was I mounted Linux partition and installed grub over there) I tried some more commands mounting individually 'chroot' something but it was giving /cow error.

I had this command sudo update-grub giving me following result in screen shot (which seems satisfactory :\ ) 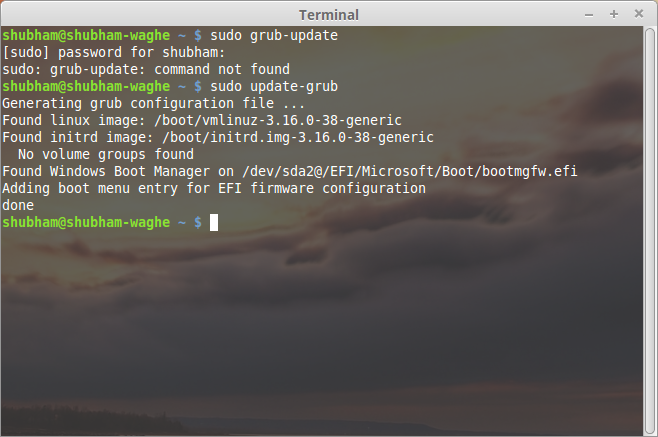 After choosing second option after F9 I am taken to menu where I can boot into Linux Mint as well as Windows from there (typical maroon background menu) I want this menu to appear at first whenever I start my laptop. Yes, I have fast-startup and hibernation stuff all disabled in Windows.

Sorry for this late answer. I faced this problem yesterday while installing Linux mint. Here is what you need to do

This worked for me when I dual booted my system which was running windows 10 with Ubuntu. I hope making few changes the command given below will work for you:-)

It is NOT a mistake to use Linux with UEFI. All the contrary! And nowadays works perfect, offering a series of improvements and new functionality than BIOS. It's time to jump into the 21th century, anyway.

I had a similar problem with Win 8.1/Mint 17.2 on my UEFI enabled Acer laptop. This solution worked for me: In BIOS, change the boot priority to Ubuntu. This will bring you to the GRUB menu at startup and you can then choose to boot to Mint or Windows. Hope this works for you.

I have an old HP 655 laptop. Boot menu looks exactly the same. I found out there is not a way to change UEFI boot order. There is not setting for this in bios. Also boot order set by bcdedit or efibootmgr is ignored. Windows always loads first.

I found out solution is to set windows boot manager inactive:

Replace 4 with your number of windows boot manager. Run efibootmgr again and you should see star disappear to mark inactivity.

After my computer boots to grup boot menu and windows can be still chosen from that.

Simple fix is there. install grub2win on windows and set as default then add new boot menu entry choose linux mint and choose the patition where u have installed mint. apply okay.after rebooting u can have option for both Windows and mint.Grub2win can be used for multiple linux and other Android os too

Your biggest mistake was to install Linux in UEFI. While Windows works fine in both UEFI and Legacy/BIOS mode, Linux is much better off in Legacy/BIOS mode. Some people advise you to install Linux in UEFI mode, it does work sometimes, but sooner or later you are going to run into problems. Best solution is to use 2 separate physical drives, one for Windows, one for Linux. If that is not an option, as is the case for most laptops, what I do is start with a clean, empty unformatted drive, format and create partitions for both Windows (NTFS) and Linux (ext4 and swap) with GParted, which I use from a Live CD/DVD/USB of Linux. Next step, I always install Windows first, from a DVD or USB installer, force it to install in Legacy/BIOS mode, and after all Windows updates are done I install Linux in the previously created ext4 partitions. Since I assume your Windows was factory installed, as it is the case with all store bought desktop and laptop computers, you would need to shrink your drive "C" in Windows in order to create space for Linux. After that, boot from Linux Live CD/DVD/USB and create ext4 partitions and swap space for Linux, then proceed to install Linux. The Linux bootloader GRUB2 will see your Windows partition and include it in the boot menu options. DO NOT repair your Windows bootsector (bootloader) as it will screw up GRUB.