I have a Lenovo Thinkpad L440.

I made space in disk to install Linux Mint. Left:

Installed Linux Mint 17 (64bits) with Cinnamon as desktop environment and everything was quite smooth... Until I started noticing how the boot process was taking too much time.

Mint was always up to date so I do the usual stuff to accelerate boot time.

One day, it took too long to boot and a kernel panic message appeared.

Tried to fix it using boot-repair but it didn't work. 'Googling', I found some commands to mount /dev/sdax partition but none of them worked for me. Finally, I gave up on everything, cleaned the partition from Windows and reinstalled Linux OS but this time it was Linux Mint 17.2 (64bits).

Again, boot-repair nor any command issued as root (from a live cd) could help me.

Cleaned the partition again from Windows and installed Ubuntu 14.04 (32 bit)

Ubuntu booted normally but it took hours! for the kernel panic message to appear.

Again, cleaned the disk partition and as I had no more OS available, used Linux Mint 17 again.

This is the Kernel Panic message I got every time. 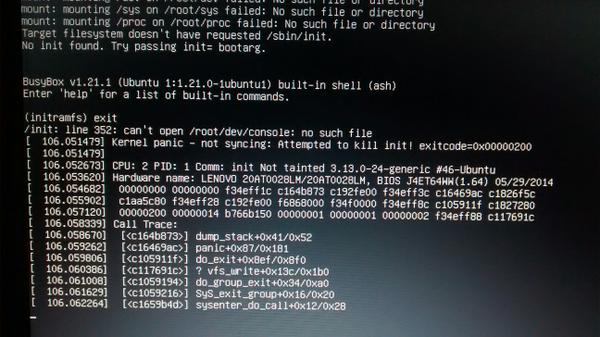 From this point now, I started to think it could be due to a hardware incompatibility so, looked for a BIOS update for my computer. Fortunately, I found an update for my Thinkpad and updated the BIOS.

A few weeks ago I had a booting issue, however, the recovery mode let me fix the linux mount and partition and everything was fine.

I really don't know what to do or what could be the cause of all this whole thing in my computer.

One of the messages in the error screen that got my attention is:

Later, a prompt asked to correct some errors and after long hours the machine would boot again into Linux Mint but now X Server wouldn't start.

Tried to install Linux Mint 17 without making partitions /, /swap and /home but with the default installation where it auto-allocates the space needed.

It took seconds for the installation process to finished when the machine immediately showed me a Kernel Panic error (very similar to picture above).

Tried this time with Elementary OS Freya, the installation seemed to be completed but when booting the pc went straight to Windows 10. Tried to fixed the GRUB with Boot-Repair but nothing happened (Boot-repair wouldn't give me the option to actually repair anything). Tried the command mount /dev/sda6 /mnt but didn't work because a Can't read superblock which I've seen before as well.

I hope it works

All this was about a bad hard drive. Don't know how or when but it got bad. Asked Lenovo support for a replacement, got it and it's been working since.

Not the answer you're looking for? Browse other questions tagged linux ubuntu linux-mint kernel-panic or ask your own question.