Why must swap partition be nested when created as an extended partition?

I did not want to use up my last primary partition so I created my new swap partition as an extended partition. However, somewhat redundantly, it is created under sda4. This makes little sense as sda5 is the only partition in ext4. Why is it forced to be nested? Why can it not be created at the same level as the primary partitions, but it must be made a "child" partition? Do you understand what I am saying? This is an unnecessary distinction, as it is the only partition occupying the extended partition. I'd rather my swap be called sda4 and not be subordinated as sda5... 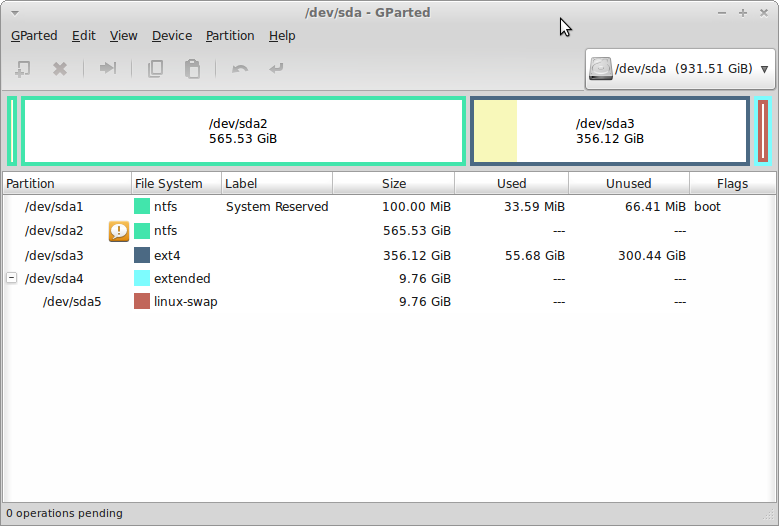 You're mixing up logical and extended partitions. Go and read about PC partition structure.

Note that Linux doesn't care whether it's installed on primary or logical partitions. You could make both your system partition and your swap partition logical. Or you could create one partition that's an LVM physical volume and create two LVM logical volumes, one for the root filesystem and one for swap. LVM gives you easier management within Linux at the expense of other OSes seeing the LVM physical volume as an opaque blob.

¹ That's not strictly required, but you'd have to go through hoops to circumvent that, and your fellow administrators will curse you.

Unix is all about transparency and power and programmer's convenience, and not so big on making things look nice if it sacrifices those things even a little bit. So if there's a partition entry on the disk, there's a partition device to go with it. (The only exceptions are empty partition slots, but then, since there's no reserved space, there's nothing to write to.)

(You think that's bad... Sun systems reserve partition 2 as a "whole disk" partition. Partition 2 must reserve the entire disk, and it must overlap with the other partitions on the disk.)

Not the answer you're looking for? Browse other questions tagged partition or ask your own question.

2
How to modify a partitioning layout (which may involve converting a primary partition to an extended one)
5
Move / to a new partition
8
Do I only need one swap partition for multiple Linux distros? (and other questions)
0
Delete and recreate of NTFS file format in Extended partition will maintain driver letter?
3
What (type of) partition is needed to install Fedora alongside Windows
1
How to renumber partitions
9
Create Partition (Standard partition vs LVM physical volume) in CentOS installation
1
Cannot delete redundant partitions
0
Recovering lost partition table with TestDisk