How does Linux kernel know that collisions occurred in Ethernet collision domain?

Let's say that I have a following network topology: 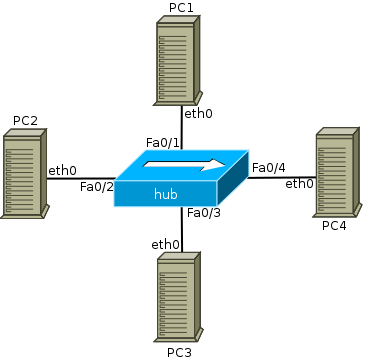 Theoretical total(Tx + Rx) bandwidth for all four hosts in total is 100Mbps. Now if I execute Iperf in UDP mode in all four hosts simultaneously and force each Iperf instance to put 50Mbps(-b 50m in Iperf client) of traffic on wire, then Iperf does not put as much traffic on wire. This is because NICs receive collisions and thus Iperf client receives -1 as a return value for some of its write() system calls to UDP socket. While I understand how kernel and Iperf client communicate, I do not quite understand how NIC and kernel communicate. Does it happen with NIC driver(tg3 for my BCM5721 NIC)? Is there some sort of system call which informs kernel that collisions have occurred?

The kernel and the NIC communicate the same way the kernel (specifically, a device driver, which is part of the kernel) communicates with any other device (e.g., serial communications device (like keyboard, mouse, or RS232), disk (or disk-like mass storage device), display, security token, etc.) – they talk directly to each other.  So, yes, this happens within the NIC driver.  No, driver ↔ device communication does not go through a system call.

Device drivers communicate with devices, generally, through two access methods: Memory-Mapped I/O (MMIO) and Port-Mapped I/O (PMIO).  These are described and discussed at some length on Super User in these two questions:

See also What is a driver, and how does it work? if you need the background information.  BTW, which access method is used is determined by the computer architecture.  For example, Wikipedia says, “Memory-mapped I/O is preferred in x86-based architectures …”

Getting back to your specific question, if we assume memory-mapped I/O, the driver could test for collision with C code as simple as

(where nic is a pointer to the NIC’s mapped address) and it’s a trivial matter then for the driver to cause an error to be returned to the user process from the write() system call.

Does the fact that drivers are part of the kernel mean that there is no driver ↔ kernel communication method?

That might almost be worth asking as another question (or at least doing some more research; i.e., web searches).  Originally, the Unix kernel was monolithic (see also monolithic kernel).  The relationship between the kernel and the drivers was like the relationship between a human body and its hands — hands are distinctive, and would never be confused with, say, elbows or lungs — but they are an integral part of the body.

Even on machines that had four protection rings, Unix used only two — the kernel was in ring 0 and userland was ring 3.  There are other operating systems where device drivers are analogous to knife and fork — one level removed (e.g., drivers are in one of the intermediate rings (1 and/or 2)).  I haven’t kept up with all the developments in *nix/Linux (e.g., LKMs), and some unices may have a greater degree of separation between the base kernel and the drivers than others.  For example, see

As I say, this stuff is at the edge of my knowledge base; don’t ask me any further follow-up questions on the above.

But also, the question is semantically ambiguous.  Does the body communicate with the hands?  Yes, through the nervous system (and, to an extent, the skeleton).  Does “the kernel” communicate with device drivers (that are part of the kernel)?  Yes, in the same sense that C programs (e.g., cat, cp, ls, sed, etc.) communicate with the C library — through subroutine calls (and perhaps the occasional, judicious use of global variables).  When a user process calls an I/O-related system call (e.g., open(), close(), read(), write(), ioctl(), poll(), select(), etc.), the general-purpose syscall-handling code (in the kernel) calls the appropriate device driver routine (possibly with some intermediate logic).  Filesystem-related code also calls the appropriate disk driver routines.  And the kernel at least facilitates the invocation of device-specific interrupt handlers when interrupts are received (implementations vary).

Not the answer you're looking for? Browse other questions tagged kernel drivers or ask your own question.

76
What is the difference between kernel drivers and kernel modules?

4
Enabling ethernet over USB support in Linux kernel
5
How does the linux kernel know device major and minor numbers?
3
Why does Linux kernel driver sr.c sr_block_ioctl do mutex_lock?
1
Does there exist a kernel hook to know which tty is currently active?
1
How linux know which irq number should be used?
7
How does kernel know which device tree to load?
2
How does the kernel scheduler know a timeslice has passed?
2
Does linux (kernel) support Intel speed shift?