I would like to create a new user on some of my Debian/Ubuntu hosts that is able to update the server using the commands apt-get update and apt-get dist-upgrade, but I do not wan't to give them full sudo access to be able to do anything else. Is this possible? Perhaps there is a way to create a script that they can't edit but can execute, which will get executed as the root user?

You can edit the sudoers file with an existing sudo user, with the command sudo visudo

You can then give a specific user privileges to those commands like so:

This can be seen in the image below 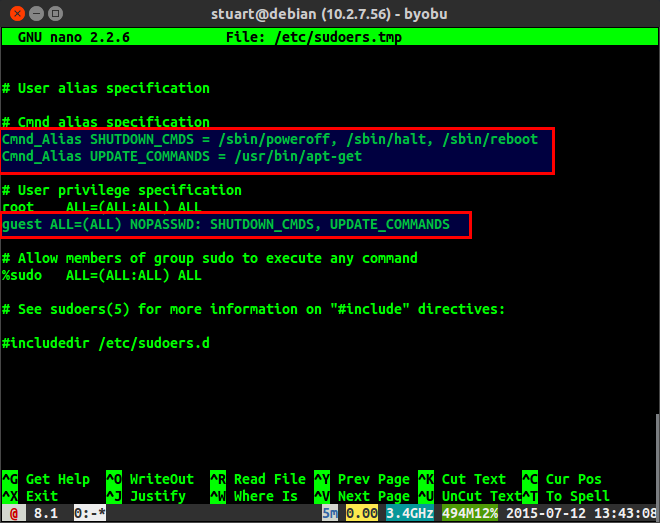 Now if you try sudo apt-get update or sudo apt-get dist-upgrade those commands will execute without asking for a password. If you want to be prompted for a password, remove the NOPASSWD bit where you grant a user access to command groups.

If you try to run anything else as the sudo user, you will be prompted for a password and fail.

Not the answer you're looking for? Browse other questions tagged permissions sudo privileges or ask your own question.

3
Is it possible to give permission to a user via sudo for only a specific Bash script?
8
Is it safe for my ssh user to be given passwordless sudo for `apt-get update` and `apt-get upgrade`?
4
Is granting unattended-upgrade command to non-sudo users safe?
2
how do I give users capabilities
1
non-root user able to access network, power commands, by using groups?
0
Is there a way to give a user access to a file without adding it to sudoers?

4
Ways to execute shell command as root?
1
How simulate a Windows like admin password prompt in Linux?
1
Execute browser as root
1
Why when I try to execute a program as normal user I get denied, and when I execute it with sudo I get "Not Found"
9
How to remote execute ssh command a sudo command without password
0
Need password to login once i edit sudoers file
1
Best way to have non-root user execute script with commands that require root access?