How to construct a GPT-only partition table on Linux?

All of the tools I've tried until now were only capable to create a dual (GPT & MBR) partition table, where the first 4 of the GPT partitions were mirrored to a compatible MBR partition.

This is not what I want. I want a pure GPT partition table, i.e. where there isn't MBR table on the disk, and thus there isn't also any synchronizing between them.

Is it somehow possible?

TO ADDRESS YOUR EDIT:

I didn't notice the edit to your question until just now. As written now, the question is altogether different than when I first answered it. The mirror you describe is not in the spec, actually, as it is instead a rather dangerous and ugly hack known as a hybrid-MBR partition format. This question makes a lot more sense now - it's not silly at all, in fact.

The primary difference between a GPT disk and a hybrid MBR disk is that a GPT's MBR will describe the entire disk as a single MBR partition, while a hybrid MBR will attempt to hedge for (extremely ugly) compatibility's sake and describe only the area covered by the first four partitions. The problem with that situation is the hybrid-MBR's attempts at compatibility completely defeat the purpose of GPT's Protective MBR in the first place.

As noted below, the Protective MBR is supposed to protect a GPT-disk from stupid applications, but if some of the disk appears to be unallocated to those, all bets are off. Don't use a hybrid-MBR if it can be at all helped - which, if on a Mac, means don't use the default Bootcamp configuration.

In general, if looking for advice on EFI/GPT-related matters go nowhere else (excepting maybe a slight detour here first) but to rodsbooks.com.

This (used to be) kind of a silly question - I think you're asking how to partition a GPT disk without a Protective MBR. The answer to that question is you cannot - because the GPT is a disk partition table format standard, and that standard specifies a protective MBR positioned at the head of the disk. See? 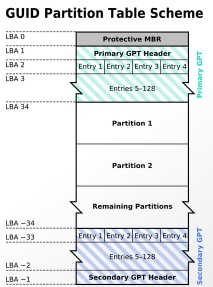 What you can do is erase the MBR or overwrite it - it won't prevent most GPT-aware applications from accessing the partition data anyway, but the reason it is included in the specification is to prevent non-GPT-aware applications from screwing with the partition-table. It prevents this by just reporting that the entire disk is a single MBR-type partition already, and nobody should try writing a filesystem to it because it is already allocated space. Removing the MBR removes that protection.

In any case, here's how:

And now for the fruits of our labor.

In your case and always you need to create a partition >2TB. You should use parted command.

Not the answer you're looking for? Browse other questions tagged linux disk gpt uefi mbr or ask your own question.

45
What is the /boot partition really for?
32
Is GRUB the best bootloading solution? Is there an easier alternative?
5
Is possible to remote mount an image, that can boot and install itself?