How to kill this process in bash

I am trying to interface my homemade Raspberry Pi-powered arcade machine with a coin acceptor, and for that I:

all is well except that I can't seem to kill the MAME process. 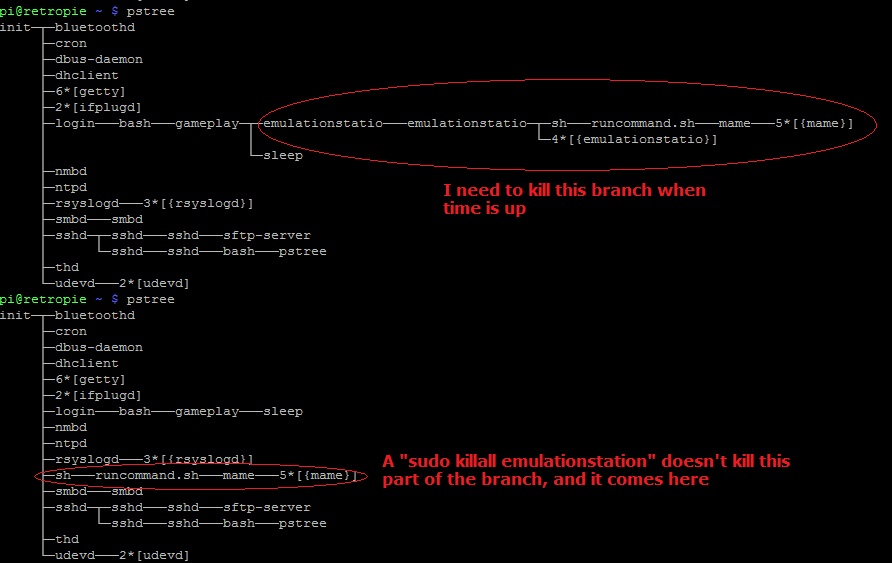 Please see the photo for more details. The first pstree shows the processes when a game is being played. And the second pstree is when time is up, and the "emulationstation" process has been killed by the gameplay shell script (by sudo killall emulationstation).

But the "mame" process is still there and the game can still be played. I have also tried "sudo killall mame" but it doesn't work.

I've been trying many ways but none works so far.

UPDATE AFTER SOME OF YOUR KIND COMMENTS

I found that all the processes in the branch can be killed, except for the "mame" process, no matter what I tried. The best killall effort always results in "mame" becoming a sub-branch of "init" as: "init--mame---5*[{mame}]". Running "sudo killall mame" here gives nothing - no error, no effect. Why can't I just kill this process? (and this is a process of the "pi" user).

Then I tried a more violent kill, as @Colin Ameigh suggested below: "killall -9 mame" after the "killall emulationstation". And it ALMOST works, only that something was screwed up in the "gameplay" script - the terminal becomes blank, and the INSERT COIN... text is no longer there (but except for this, it works as intended, I also don't remember noticing any zombie processes). Here is the content of the gameplay script:

For a more general approach to killing processes...

This command should show the process

Then either cut and paste the process ID

or, if you're a little braver using pipes

If you don't have pgrep (for some reason), then you can replace the pgrep command with this monstrosity:

The "[r]uncommand.sh" part just ensures that grep doesn't find its own process ID as well.

Given your specific use case - perhaps the shell script could have a SIGHUP handler that kills the mame process (since it should have the process ID) leaving the script running and the arduino trigger just has to send a SIGHUP to the script instead (via this mechanism, kill can send SIGHUP with -1), which can then return to a loop waiting for the coin signal.

Give a try to

After I execute the command, all the instances of nemo get killed. Though we can send the signal. But I prefer killall. Hence suggested above command.

In the above script, saving the PID of script into a variable and killing the process with the help of it's PID. Give it a try

Not the answer you're looking for? Browse other questions tagged bash shell shell-script or ask your own question.

2
How does this bash function work?
4
Why can't I kill this process?
2
How to create a script that can't be easily exited
1
Bash: kill process in function of the memory used
3
Can't run 'kill -- -$$' in my shell script when I sudo it
1
Bash script to check whether python scripts are running in screens - restart if not
0
Why do my orphaned grandchildren die only if they produce output?