Background color whitespace when end of the terminal reached

I am working with control sequences for text formatting and have stumbled upon some unexpected behavior. I have some text to output, in the middle of this text there is some smaller text block highlighted with a colored background. The original text may be pretty long, it may take a few lines, so the colored text block in the middle may appear on the multiple lines - starts on the one line and finishes on the other. Everything seems to work fine until it reaches the bottom of the terminal window, a lot of whitespace becomes colored: 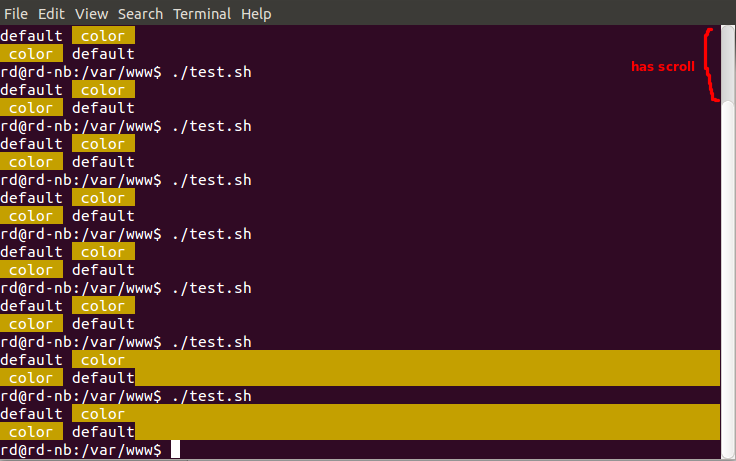 Here is a script to reproduce:

As you can see, I've added a newline character \n in the text block, just to reproduce, but it my situation, when a text is pretty long and it does not fit into a single line, colored block gets split into multiple line, and as a result I have the same colored whitespace after the text. 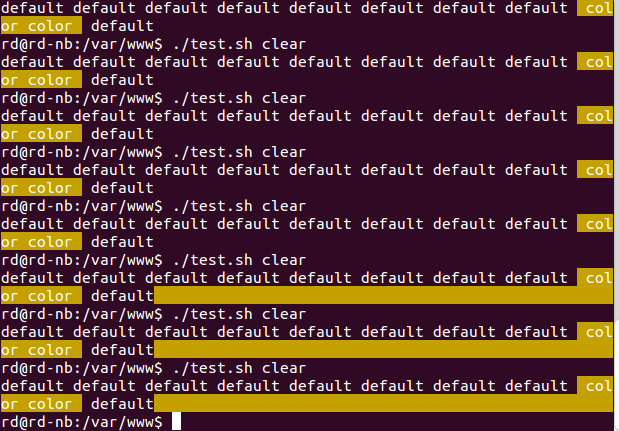 I wonder what is the reason of this behavior and how it can be fixed without using different utilities for output (instead of echo), but maybe by using the same control sequences. I have control over the text, but not over the output process.

Agreeing with @hildred that this is terminal-specific behavior, there are some points of disagreement:

Convention is a strong argument; programs rely upon these design choices not changing. For a few examples where that leads to problems, consider a few cases:

A recent bug report for VTE, #754596 provides entertaining reading. It seems that VTE's developers suggested just changing the behavior to see what happens:

For starter, we could just "fix" our code (remove the "Match xterm and fill the new row when scrolling" 6 lines from _vte_terminal_cursor_down()) for the next development cycle and see if anyone complains about something breaking. Then we'll have a better understanding of the situation.

This has nothing to do with bash, it is purely an effect of the terminal's behavior, specifically scroll. When you reach the bottom of the screen, and start to type on the next line, the terminal creates a new blank line by pushing everything up one line. (In older terminals this destroys the top line. In newer terminals the top line is just pushed into the scrollback buffer.) Now here is the hard question, what color is the new line. The foreground color is not an issue, because you cannot see it, but the background color . . . (In the days they started arguing it could be black gray or white (or actually black green, bright green or the same in amber)) There were experiments to just use black, but there were complaints. What was settled on is that the new line (or cleared area in a clear up the whole screen in the case of a screen clear) would have the current background color as the background color of the affected area. So this behavior is by design, because it does the right thing in most cases.

So what do you want to do to get the behavior you want? When you change back to black background (or at the end of the line) send a clear to end of line which will set the background color for the rest of the line.

Not the answer you're looking for? Browse other questions tagged command-line terminal colors escape-characters or ask your own question.

2
How to change the background color for exactly one line?
2
How to fix konsole `\033[0m` not working start from second page of scroll?

5
Colored text set up with PS1 and colored output from commands mess each other up
3
Cut colored text ignoring color tags
25
Can the empty spaces/background in a terminal be replaced with a random(but pretty) pattern of ASCII characters?
4
Bash - Convert escape character colored text to BBCode
26
Is there any manual page for colored shell output?
8
Issue with column command and color escape codes
1
How can processes eliminate escape codes when its output is piped?