When using Ctrl+R to search bash history, is there some way to match two words that aren't next to each other. For example, let's say I wanted to find the last command that contained httpd and awk but not next to each other. Is there some better option than resorting to grepping the bash history to match both or pressing Ctrl+R to cycle through entries matching one keyword until the desired command is found?

You want a regexp instead of fixed string. 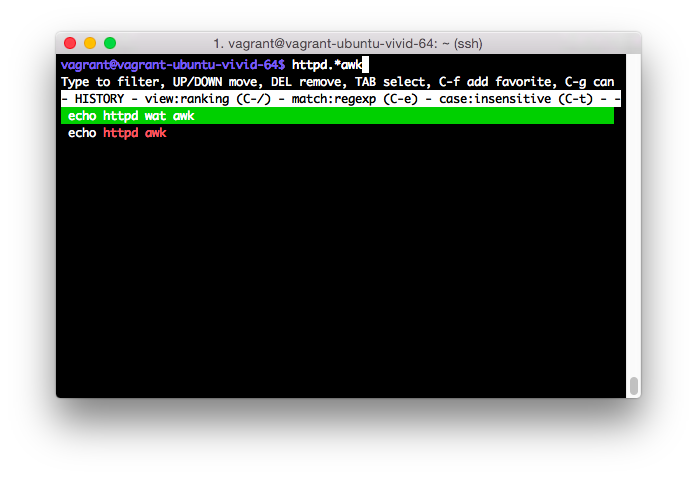 Update:
Another tool is fzf. 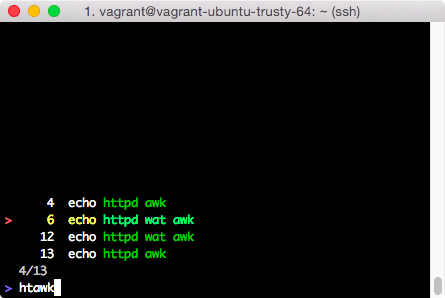 I dont know of any built-in way to do this, but you can write a small function to do the grep and edit your history file so that the results appear at the end, and you can then easily choose one of the matches by just moving up through the new history. (This does change the order of commands in your history).

Here's such a function. I'm assuming you want to find the 2 (or more) words no matter which order they appear in. You can set the max number of matches you want to accept; here it is 10. I'm also assuming that the initial grep doesnt return a humungous string, or you'll need to use temporary files instead of bash strings.

If you dont want regexp pattern matching for your words, use fgrep instead of grep. If you want only the given order, use a single word like "httpd.*awk". You could also remove the for loop if only using one word in this way.

Not the answer you're looking for? Browse other questions tagged bash command-history or ask your own question.

111
Command-line completion from command history
9
Saving bash history from multiple Konsole not working correctly
1
bash autocomplete not working, does not 'complete'
714
How to cycle through reverse-i-search in BASH?
16
bash_history: comment out dangerous commands: `#`
7
How to have type-ahead apply to bash history search (Ctrl-R)?
1
How can I permanently correct a typo in my last bash command?
1
Is there an easy way to avoid duplicating commands in bash's HISTIGNORE?
1
Why can't I get bash to use forward incremental search?