Software RAID 5 and 6 stripe size: why smaller is less efficient?

Let's say we have a RAID 6 setup with 4 local SAS drives.

case 1: we write 1 Gb of sequential data
The program ask the kernel to write the data, then the kernel divide it to match the stripe size and compute each chunk (data and/or parity) to be written to each disk.
The kernel is able to write to the 4 disks at the same time (with the proper disk controler).
If the written data is not fully aligned with the stripes, the kernel has only to read the first and last stripes before computing the resulting data. All other stripes will only be overwritten without any care for previous data.
Because this computing is done much faster than disks throughput, each chunk is just written next to the previous one on each disk without pause. So this is basically a sequential write on 4 disks.
How a small stripe size could slow down this ?

case 2: we write 1,000,000 x 1 kb of data at random places
1 kb is smaller than the stripe size (common stripe size is currently 512 kb)
The program asks the kernel to write some data, then some other data, and again some other, etc. For each write, the kernel has to read the current data on disk, compute the new content, and write it back to the disk. Then the heads move elsewhere and the operation is repeated 999,999 more times.
The smaller the stripe size, the faster the data is read/computed/written. Ideally a stripe size of 4 kb should be the best with modern disks (if correctly aligned).

So once again, how a small stripe size could slow down this ?

As far as I know the issue has never been to do with head movements and all simply due to more overheads. For a given sequential read or write a 4KB stripe size results in sixteen times more operations than a 64KB stripe size. More CPU time, more memory bandwidth, more context switches, more I/Os, more work for the kernel I/O scheduler, more merges to compute, and so forth, so ultimately more latency per I/O.

Remember a lot of applications issue I/Os with a queue depth of 1 so you may not always be able to merge 16 4KB sequential requests to a 64KB request to disk.

Also if you look at a typical ATTO disk benchmark such as this one: 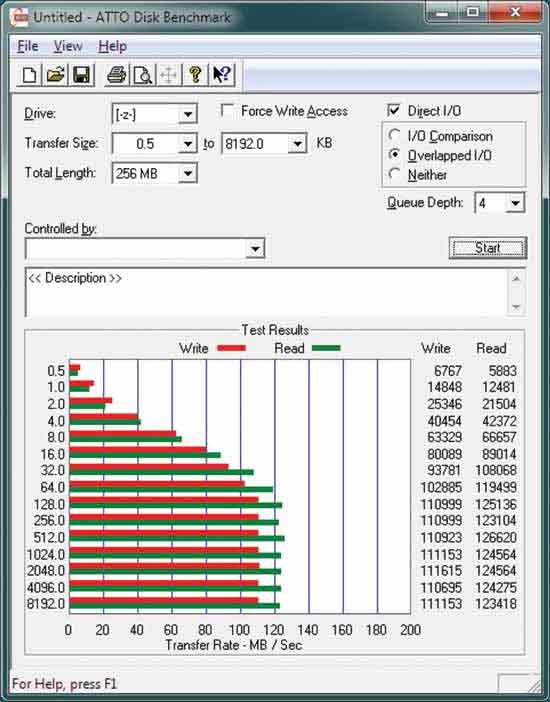 You can see that the disk cannot even read sequentially at full speed until the reads are done in blocks of 128KB or larger.

Tomshardware has a fairly comprehensive review of the effects of stripe size here :

I speak about Linux sofware RAID. When you look into the code, you see the md driver is not fully optimized: when multiple contiguous requests are made, the md driver doesn't merge then into a bigger one. This lead to massive overhead in some common situations.

Big reads or writes are optimized: they are cut down to several requests egal to the stripe size, and treated optimaly.

If the read or write is accross 2 stripes, the md driver does the job correctly: everything is handled in one operation.

With small reads there is no problem because the data is in the kernel cache after the first read. So several contiguous reads only generate a small overhead for CPU and memory, compared to the slow disk bandwidth.
For example I read 1 Gb of data 100 bytes at a time: the kernel will first transform it to a 512 kb read because this is the minimum I/O size (if the stripe size is 512 kb). So the next 100 bytes will already be in kernel cache. This is the exact same thing as reading from a non RAID partition.

With writes smaller than the stripe size, the md driver first read the full stripe into memory, then overwrite in memory with the new data, then compute the result if parity is used (mostly RAID 5 and 6), then write it to the disks.
For example I write 1 Gb of data 100 bytes at a time: the kernel will first read the 512 kb stripe, overwrite the required parts in memory, compute the result if parity is involved, then write it to the disk. When writing the next 100 bytes, only the "read the 512 kb stripe" is avoided because the data is in the kernel cache. So we have a small overhead for overwriting into memory and computing parity, but a huge overhead because the data is written again to the same stripe. The kernel code here is not optimized.

I didn'd dug enough to understand why those repeated writes are not correctly cached, and the data flushed to disk only after several seconds (so only once per stripe). If they where cached, the overhead will only be some CPU and memory, but my own benchmarks show CPU remain under 10%, and the I/O is the bottleneck.

If the writes were optimized, then the minimum stripe size will always be the best: RAID 6 with 4 disks with 4 k sectors will lead to 8 kb stripes, and it will be the best for read and write througput for every possible load.

As with all things, there's a happy medium. But I would suggest have a look at RAID2 and RAID3 - both types that are rarely used - to get an understanding of the nature of the problem.

However it's basically boils down to latency of IO and concurrent data transfer. Every read IO operation has an overhead of several milliseconds for the heads to seek and the drive to rotate.

If we have larger chunks of data, we pay this penalty less often. It's much like a cruder form of prefetching - because of this overhead, it's generally a good idea to prefetch multiple chunks of data when one is requested, simply because it's statistically likely that you'll need it anyway.

But primarily - it's a performance tuning operation than a hard rule - you should set your chunk size based on whatever workload you're sending to the disk. If your workload is mixed or random, then it becomes increasingly hard to do this. Larger chunks mean more throughput with fewer IO operations, and it's usually your IO operations that are the limiting factor on your drive speed and so it is usually beneficial to have larger requests.

For specific use cases (like databases!) this may well not apply though.

Not the answer you're looking for? Browse other questions tagged raid or ask your own question.

5
Can I create a 2 TB RAID-1 array out of one 2 TB disk and two 1 TB disks while preserving 1 TB of data?
3
understanding the "chunk size" in context of RAID
1
Two arrays have slightly different array size with same size disks/partitions, why?
3
Raid 5 rebuild with wrong stripe size & no failed disks - is data lost?
5
Software RAID using network shares as drives
0
raid 2 smaller drives with one larger drive
0
OS and addtional software raid is it a good approach?