I have a string with tab delimited data that looks like:

I produced it with Notepad on Windows. I created tab delimited data, ensuring that tabs and not spaces are used. 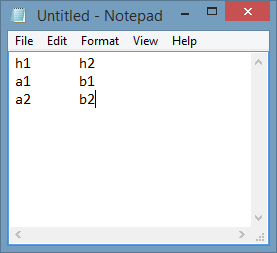 I connect to a Linux server via SSH using PuTTY. I would like to write the file to /tmp/test.txt and preserve the tabs. So I run cat <<EOF >/tmp/test.txt. I copy the text from Notepad and paste it into the putty session. Then I enter EOF.

However, that produces a file without tabs having the contents of:

I've found that this works:

However, it required that I change my input string to use '\t' instead of actual tabs. What is a more elegant/simple solution that allows me to take a string literal as-is from Windows and write it into a file on the remote Linux machine?

I am SSHed into a Linux server from Windows via putty. The server is:

The easiest way to copy a file without it being transformed would be to use PuTTY's companion program PSCP or PSFTP to copy the file. This is the simplest way conceptually, but it does have the overhead of running another program, authenticating, choosing a directory, etc.

I you want to transfer arbitrary data over a medium that interprets control characters, you can encode it into a form that uses only “tame” characters. Base64 is one; it doesn't use any control character and ignores whitespace and newlines. GNU coreutils, which is part of the basic installation on Linux and Cygwin, includes a base64 command. On the sender side, run base64 <file-to-decode, e.g.

I'm not entirely sure what problem you're having - on my RHEL install, cat works if I give it tab stops. However as a more general solution perhaps:

Will take 'input' on either STDIN (catted into) or as filenames (e.g. myscript.pl <filename>) and convert all whitespace to tab stops.

If you would like a more simple solution than perl script, you can use sed, anyway that perl script is simple too.

Not the answer you're looking for? Browse other questions tagged bash ssh putty clipboard here-document or ask your own question.

0
Here document and input redirection with -
14
How to combine Bash's process substitution with HERE-document?
3
Setting up ssh - reboots x server
3
Heredocument error I can't understand (“delimited by end of file”)
1
GLX version is different when using SSH versus logging in directly?
1
Here-document without interpreting escape sequences, but with interpolation
3
Here-document with cat
1
Unable to start new gnome terminals from shell script when remotely logging in through ssh