When I try to run ./script.sh I got Permission denied but when I run bash script.sh everything is fine.

What did I do wrong?

You can verify this by running ls -l script.sh.

However, attempting to execute the file results in:

The getfacl command shows the reason why:

In this case, my primary group is domain users which has had execute permissions revoked by restricting the ACL with sudo setfacl -m 'g:domain\040users:rw-' t.sh. This restriction can be lifted by either of the following commands:

Finally, the reason in this specific case for not being able to run the script is that the filesystem the script resides on was mounted with the noexec option. This option overrides POSIX permissions to prevent any file on that filesystem from being executed.

This can be checked by running mount to list all mounted filesystems; the mount options are listed in parentheses in the entry corresponding to the filesystem, e.g.

You can either move the script to another mounted filesystem or remount the filesystem allowing execution:

Note: I’ve used /tmp as an example here since there are good security reasons for keeping /tmp mounted with the noexec,nodev,nosuid set of options.

Try chmod +rx script.sh, this will give read and execute permissions to user, group and others.

On my win7 with admin running cmd; I have .sh files associated with cygwin64/bin/bash, but it was blocked by cmd. None of the above suggestions helped (chmod, setfacl, mount).

The solution below worked, it is an admin sledge-hammer acl-fixer whenever folders/file become inaccessible to admin on win7, which is often):

If you still get Permission denied errors when you try to run your script in the docker's entrypoint, just try DO NOT use the shell form of the entrypoint: 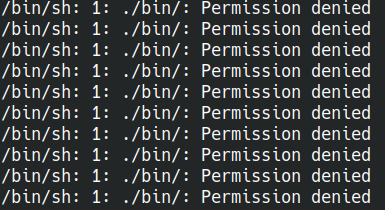 Not the answer you're looking for? Browse other questions tagged bash shell-script permissions mount or ask your own question.

62
What is the difference between running "bash script.sh" and "./script.sh"?
0
Execute ./script.sh with a crontab