Is that possible? How?

I have a RS/6000 with AIX 5 that finds and works with any kind of 'autonomous' network printer. And I would like to expose through Linux (preferably Debian) an USB printer in the network, like any ordinary network printer (autonomous device) which I could access in AIX.

EDIT: I need to do in AIX something like that, where 'my_printer_ip' is the Linux IP:

I understand that network printers use a protocol called RAW (or Jetdirect), is that correct?

Yes. There are two network protocols for print jobs that are still relevant today: LPD, running on TCP port 515, and JetDirect, running on TCP port 9100. LPD was designed by Berkeley for BSD UNIX in the old days. It's pretty much obsolete now, but it's still available on many printers, presumably for compatibility with old servers. JetDirect was designed by HP in the early 1990's, and it's simpler and somewhat faster than LPD. You should probably use JetDirect whenever available.

I have a RS/6000 with AIX 5 that finds and works with any kind of 'native' network printer. And I would like to expose in the network a USB printer like a network printer (autonomous device), using Linux (preferably Debian) to do that.

Install CUPS on a Linux machine, and connect the printer to it. You don't even need a full machine for that, a Raspberry Pi or similar, or a home router with an USB port and running OpenWRT or DD-WRT, would work just fine.

CUPS allows you to share printer with (at least) IPP, LPD and samba protocols out of the box. IPP is supported by most operation systems and IBM was part of the Printing Working Group which came up with IPP so it's likely supported in AIX as well.

Also, samba has AIX protocol so one or the other should work. search for AIX

But none of the documents I came across referenced AIX version so I can't be sure if AIX 5 is supported or not.

The way it works anyhow is that you plug the printer to server with CUPS installed and select the method of sharing, broadcast settings etc. It's straightforward. Then clients can connect to it and it'll show up as network printer.

After some researches and tries...

These "network printers devices", could implement some protocols, being one of them the one called "HP JetDirect", also known as "Raw", "JetDirect", either just "9100". It seems to be the most common protocol supported by network printers. 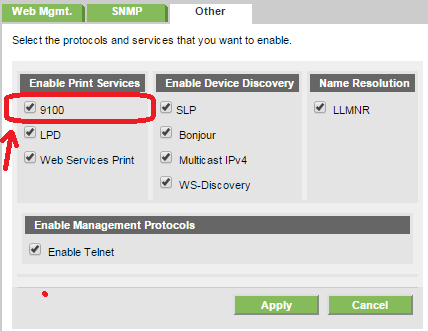 The JetDirect protocol is just an ordinary network stream, and not a real protocol, at least in my tests. So, you don't need CUPS neither any kind of printer engine to have a Linux behaving like a network printer, all you need is a 'network stream server' like inetd (or xinetd), to listen to the port 9100 and redirect this stream to the printer stream.

Consider a printer stream in the port /dev/lp0, where we could do something like that:

Now we could redirect the stream coming in the port 9100 to the /dev/lp0, just using the old school inetd:

So, in any other remote system (like AIX), we could get the legacy parallel (or USB) printer plugged in a Linux to work like a network printer:

Of course, there are concurrency issues which beyond others solutions could be handled by CUPS configuring the local printer under a spooler.

It worked for me !

You'll probably want to install CUPS; according to this page it's definitely available for AIX as well.

Once you've configured it to recognize and use your printer, you probably want to check here for instructions on how to share it across the network.

Alternately, you can use samba to share the printer; nowadays most OSes speak the protocol.

This very old program exports a local printer on /dev/lp to localhost:9100. I had to edit the Makefile to support older programming standards. There could be other ways to do this with newer programs. I would like to know: lp_server-1.1.6 source code

OP- And I would like to expose through Linux (preferably Debian) an USB printer in the network, like any ordinary network printer

Here is the help from lp_server:

The USB printer would appear as a character device /dev file on the linux server and then get exported to the network IP address port 9100 by lp_server where the AIX computer can find the simulated Jet Direct print service. This should be very similar to the minimalist inetd answer and just provide another choice.

Not the answer you're looking for? Browse other questions tagged networking aix cups printer or ask your own question.

3
How do I set up a PostScript print queue to share a PCL laser printer and add PS fonts?
1
How to install Canon PIXMA MX882 using CUPS 1.4.8 in Puppy Linux Precise 5.7.1
14
List All Network Printers (including ones not installed)
1
Script to do periodic printing
2
How do I share a CUPS printer easily in Linux?
0
cups printer prints raw postscript
1
CUPS driverless print server as proxy for printers with legacy PPD printer drivers