I am currently trying to install Elementary OS instead of Linux Mint.
Windows works fine but Mint boots fine but has some problems (Cinnamon Crashes and unable to browse other drives) so cannot use for regular use. So I decided of trying the newly released Elementary OS.

I started the Install reached the step for "Installation Type" and selected "Something Else" as I already has the partitions where I would be installing it. But then it didn't show /dev/sda partition structure. 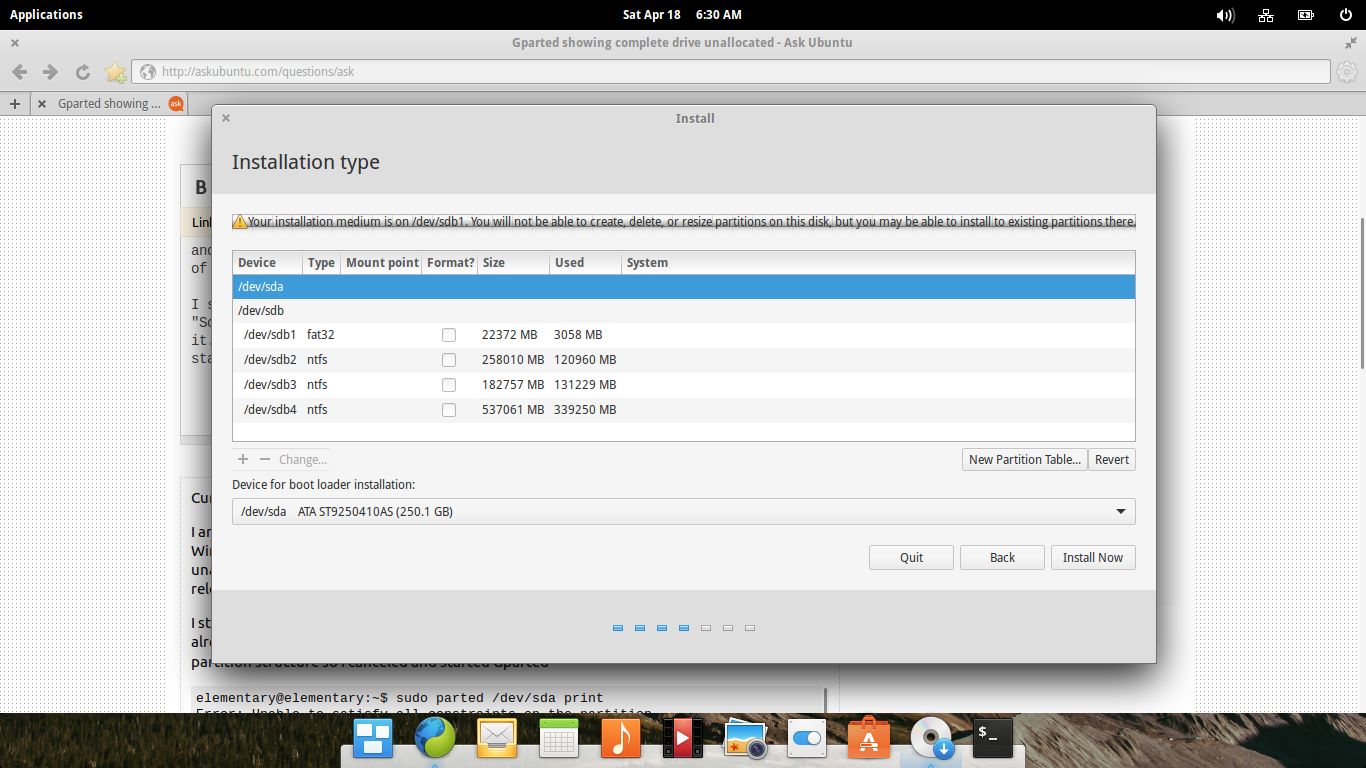 LiveCD runs from sdb1, so I canceled and ran parted, fdisk, fixparts(readonly).

Image from Easues Partition Magic http://i.imgur.com/ZzlfaOD.jpg taken on Windows 7 Here Is the Output:

I am not getting what the problem is! As I had previously successfully installed different versions of Ubuntu's, Linux Mint's. If anymore information is required please comment. Any help is appreciated.

Your partition table looks OK, but it's a bit odd. In particular, most partitioning tools put a data structure known as an Extended Boot Record (EBR) in the sector immediately preceding the logical partition it describes. In your case, though, there's no gap between your logical partitions 5 and 6, so your partition 6's EBR must be located somewhere else. This is legal, but it's unusual. My suspicion is that libparted (used by parted, GParted, and most GUI Linux installers) is confused by this placement, resulting in the empty partition table you're seeing.

You might get a little more information on this by running parted on the disk, as in:

If I'm right, there may be an error message that describes the problem (most likely using confusing terms). It's conceivable that the message will suggest a fix. If so, you could try that (but see my caveat below).

The easiest way to fix this is likely to be to shrink partition 5 or 6 so open up a short gap between them. (Just one sector should be plenty, but most partitioning tools align on 1MiB boundaries, so you may need a 1MiB gap.) The trouble is that GParted doesn't see partitions, so you can't use it; and the built-in Windows tools will most likely try to convert the disk to a Logical Disk Manager (LDM) format, which will render Linux unbootable. The EaseUS program you used for your screen shot may well do the job safely, but I can't promise that.

If you resize the partitions as I suggest and GParted still shows the disk as empty, run FixParts on it, as you've already done. This time, though, FixParts should not show any partitions as "omitted." You should then be able to type w to save your changes (which would be nothing but re-writing EBRs in a way that parted would like).

The big caveat: Because your partition table is a bit unusual, any changes you make are risky. I'm the author of FixParts, so I know its capabilities; but even with FixParts, I can't promise how it will react to your disk after you make the change I suggest. Worse, a resizing operation is risky at the best of times, and because of your partition table oddities, it's even riskier. I strongly recommend you back up important data before doing anything more with your disk.

Not the answer you're looking for? Browse other questions tagged dual-boot partition gparted or ask your own question.

5
Move / to a new partition
1
How to add Puppy Linux to grub menu installed by Ubuntu?
8
How to use DD to clone a partition off a disk image?
10
area on disk after the MBR and before the partition start-point
1
Disk problems prevent me from booting, or set the disk to read-only. How do I fix the disk?
2
Manually cloning a Live USB Arch distro to a VMware virtual disk
2
How to mount sdb directly or using LVM partitions on sda?
3
Cannot format a corrupted 32Gb SD card
12
How to extend logical & extended partition with fdisk
1
Extend partition using LVM