I'm currently trying to modify my terminal to have the prompt displayed in a different colour than the whole rest of the shell, and I would like to make it white for normal users and red for root.
I would like to do so on both, an OS X 10.10 Desktop and an Ubuntu 14.10 Server.
The only way I know of doing this is to modify $PS1.
And to do so, I would have to put it in a script that the shell sources on login, right?

However, on OS X the root user's shell is /bin/sh, and although that is actually bash, it does not source any login script unless a full login is invoked.
Now I know about su - <user>, but I need it to work with just su <user>.
I could change the root user's login shell, but I'd rather not.

Here's what I found out so far:

bash invoked as bash and logged in as su - sources:

bash invoked as bash and logged in as su sources:

bash invoked as sh and logged in as su - sources:

bash invoked as sh and logged in as su sources nothing at all.

I also tried hijacking $PROMPT_COMMAND, but that gets emptied on invoking su.

On the bash manual it says:

If Bash is invoked with the name sh, it tries to mimic the startup behavior of historical versions of sh as closely as possible, while conforming to the POSIX standard as well.

When invoked as sh, Bash enters POSIX mode after the startup files are read.

So... is there any way me to set $ENV?
Simply setting it before invoking su has no effect.

Or is there any other way for me to modify $PS1 when the UID changes (full login or not), without having to use su - ..., changing the root user's login shell or messing with su/bash?

Make an alias if that's too much typing for you.

I personally use that on my Mac and it's also working on my Ubuntu Server. But I edited two files.

In the .profile of root I put

and in the .bash_profile of my personal user I put

The effect is the following : 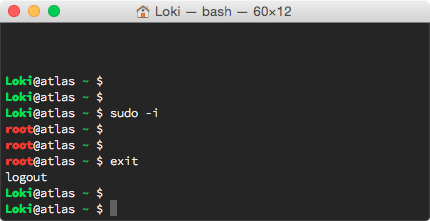 You can find all colors here http://blog.taylormcgann.com/tag/prompt-color/

But in your case, I think you should use this solution https://unix.stackexchange.com/a/174/50145

Not the answer you're looking for? Browse other questions tagged bash shell login su or ask your own question.

299
Colorizing your terminal and shell environment?

7
How does bash know how it is being invoked?
3
How to source correct startup scripts on interactive, non-login shell
0
/etc/profile is not read in changed user shell
6
When is /etc/bash.bashrc invoked?
13
Is it possible for there to be a login shell that's not interactive?
2
Why does a non-interactve bash login shell ignore /etc/profile when invoked by su -?
4
ssh command and non-interactive, non-login shell
2
Does a noninteractive login shell execute `~/.profile` or a file whose name is `$BASH_ENV`?
0
Why can't login be invoked as a sub-process and executed in any shell but the login shell?
2
sudo not executing bashrc as expected