How can I implement a circular flow of data among interconnected commands?

I know of two types how commands can be connected with each other:

I do not know if that is all that is possible, so I draw a hypothetical connection type: 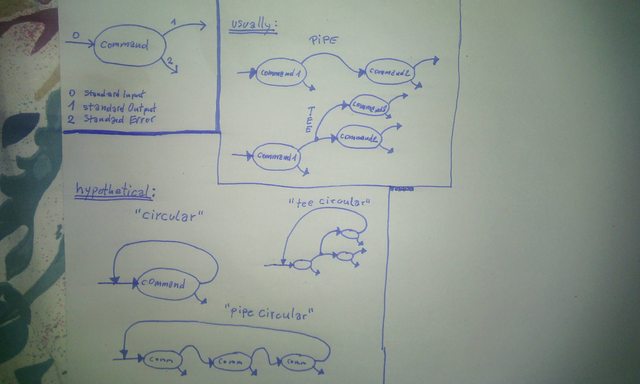 How could it be possible to implement a circular flow of data among commands like for instance in this pseudo code, where I use variables instead of commands.:

This implements a circular I/O loop:

This implements the circular input/output loop using the sine algorithm that you mentioned:

Here, bc does the floating point math and s(...) is bc's notation for the sine function.

Implementation of the Same Algorithm Using a Variable Instead

For this particular math example, the circular I/O approach is not needed. One could simply update a variable:

You can use a FIFO for this, created with mkfifo. Note however that its very easy to accidentally create a deadlock. Let me explain that—take your hypothetical "circular" example. You feed a command's output to its input. There are at least two ways this might deadlock:

That said, here is how you do it. This example is with od, to create a never-ending chain of hex dumps:

Note that eventually stops. Why? It deadlocked, #2 above. You may also notice the stdbuf call in there, to disable buffering. Without it? Deadlocks without any output.

You know, I'm not convinced you necessarily need a repetitive feedback loop as your diagrams portray, so much as maybe you could use a persistent pipeline between coprocesses. Then again, it may be there isn't too much of a difference - once you open a line on a coprocess you can implement typical style loops just writing information to and reading information from it without doing anything very out of the ordinary.

In the first place, it would appear that bc is a prime candidate for a coprocess for you. In bc you can define functions that can do pretty much what you ask for in your pseudocode. For example, some very simple functions to do this could look like:

But of course, it doesn't last. As soon as the subshell in charge of printf's pipe quits (right after printf writes a()\n to the pipe) the pipe is torn down and bc's input closes and it quits too. That is not nearly as useful as it could be.

@derobert has already mentioned FIFOs as can be had by creating a named pipe file with the mkfifo utility. These are essentially just pipes as well, except the system kernel links a filesystem entry to both ends. These are very useful, but it would be nicer if you could just have a pipe without risking it being snooped in the filesystem.

As it happens, your shell does this a lot. If you use a shell that implements process substitution then you have a very straightforward means of obtaining a lasting pipe - of the kind that you might assign to a backgrounded process with which you can communicate.

In bash, for instance, you can see how the process substitution works:

You see it really is a substitution. The shell substitutes a value during expansion that corresponds to the path to a link to a pipe. You can take advantage of that - you needn't be constrained to use that pipe only to communicate with whatever process runs within the () substitution itself...

Now I know that different shells do the coprocess thing in different ways - and that there is a specific syntax in bash for setting one up (and probably one for zsh as well) - but I don't know how those things work. I just know that you can use the above syntax to do virtually the same thing without all of the rigmarole in both bash and zsh - and you can do a very similar thing in dash and busybox ash to achieve the same purpose with here-documents (because dash and busybox do here-documents with pipes rather than temp-files as the other two do).

... which just gets me the last value for bc's a rather than calling the a() function to increment it and prints...

It will continue to run, in fact, until I kill it and tear down its IPC pipes...

In general I would use a Makefile (command make) and try to map your diagram to makefile rules.

To have repetitive/cyclic commands, we need to define a iteration policy. With:

each make will produce one iteration at the time.

Not the answer you're looking for? Browse other questions tagged shell command-line scripting pipe or ask your own question.

7
Reusing pipe data for different commands
1
Pipe chain with devices
22
Pipes, how do data flow in a pipeline?
1
How to send variable value to pipe while hiding it from the process list?
2
force output to input (buffer) like "\033[6n" in a script
1
How to concatenate results of multiple commands and pipe into another without intermediate file?
4
What's wrong with this branched data flow using `tee`, fifos, and `paste`?
2
Can we use $PIPESTATUS with the tee (or pee) command?
0
Can one pipe compound commands?