Yellow appears as brown in konsole

For some reason, the yellow color color (ANSI Esc. code 33), appears for normal fonts as orange/brownish in my terminal (yakuake, konsole). For example, the command echo -e "\\033[33mhello world\\033[0m" returns an orange/brownish text hello world. Bold yellow, however, appears as expected. In the following, small, sccreenshot, the hostname is on top of a yellow background, which is the escape code \e[43m.

Another example, is the output of the command terminal-colors -o. It gives the output as seen in the larger screenshot below. 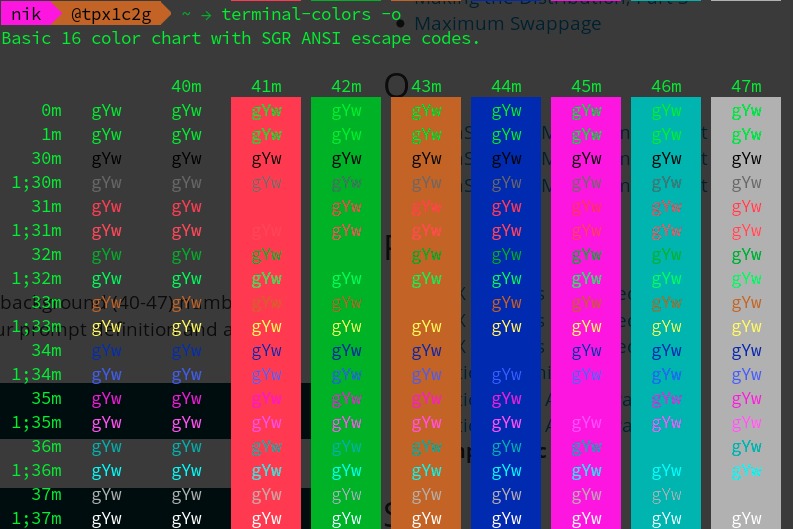 I work with Funtoo-Linux and KDE. Though I have set some transparency (23%) I don't think this is a misleading of the eye issue. How can I troubleshoot this?

Perhaps more useful for 256 colors, is the output of terminal-colors -cn (or other parameters). In the screenshot below, the yellow background has been correctly set: 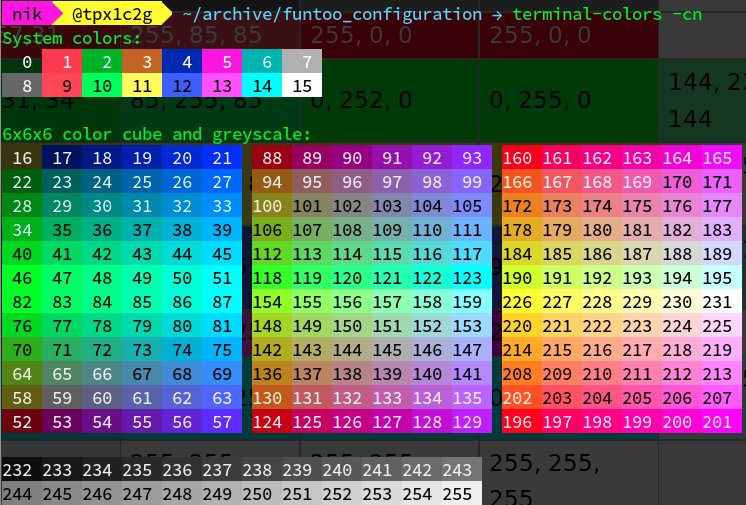 while nominal values with roughly similar brightness would be

There is considerable variation on all colors, not just on the one for which you choose to give a different name. Yellow does however have a tradition of being made more brownish because actual yellow tends to be poorly contrasted on a white background (and sometimes blue is made more grayish to be better-contrasted on a black background).

You can change the colors used by Konsole if they bother you. In the profile settings, go to the “Appearance” tab and either choose from one of the profiles or make up your own. You can even make the colors resemble nothing like the standard ones if you wish, though that may be confusing at times.

To troubleshoot this, if you're using X11/Xorg, I would start by requesting xrdb:

It will display all non-default values.

~/.Xresources or ~/.Xdefaults files can customize your terminal colors. It can be customized in a specific application file in /usr/share/X11/app-defaults/ directory as well.

For instance, on my box where I have my own ~/.Xresources in order to change cyan color to purple in my Xterm, xrdb -query tells me:

Konsole appears to have color issues, so i just used bright yellow (93) instead of brown "yellow" (33):

Not the answer you're looking for? Browse other questions tagged terminal colors konsole or ask your own question.

82
Why is my bash prompt getting bugged when I browse the history?

55
CLICOLOR and LS_COLORS in bash
9
Disabling line wrap in Konsole
5
clear command in Konsole
4
How to open konsole in fullscreen mode?
1
Konsole: disable right-click menu
1
keyboard shortcut for terminal opens and instantly closes terminal (konsole)
2
Workaround for Ctrl-Space in Konsole
1
changing prompt color in bash in konsole
2
How to fix konsole `\033[0m` not working start from second page of scroll?